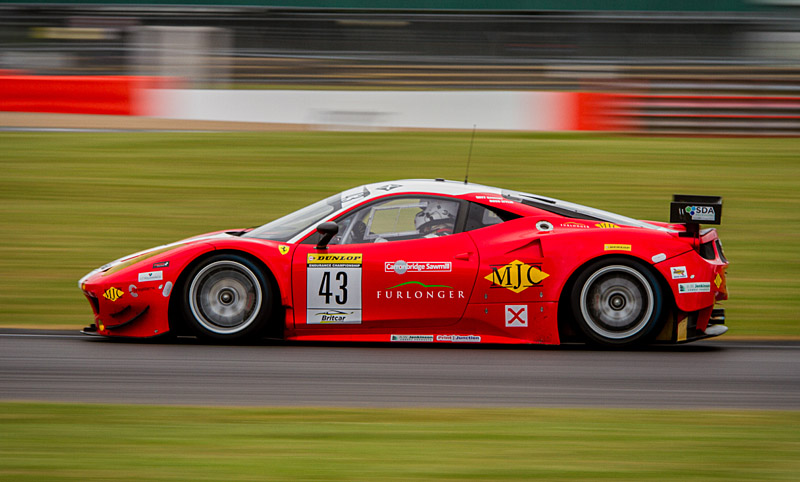 Pulling a Sickie, Man Flu, a Duvet Day … all seemingly good excuses in the workplace, but not for motorsport, not for Witt Gamski, and not for Ross Wylie. Witt, still hobbling while nursing the recovery of a severe ankle injury, and Ross, sporting the symptoms of Chickenpox, overcame their personal adversities and that of the talent that surrounded them to post a convincing win in the MJC Furlonger Ferrari 458 GTE in the opening 50-minute encounter.

A lower temperature than the preceding week, with even the slight threat of rain, made conditions more comfortable for racing, and a large grid was depleted by mechanical woes for the Morcillo/Cintrano Mosler, which was unable to take its third-place slot on the grid, and Rob Baker’s Smart, having blown the engine when a loose component jammed the throttle. Wylie had planted the MJC Furlonger 458 GTE on pole during qualifying, though Gamski would be taking the start (a Pole on pole – that pun is going to wear thin soon), with Calum Lockie alongside in the FF Corse GT3 version. The pair stuck to the script as the red lights went out, Lockie off like a robber’s dog into the yonder, and Gamski, the full-tank expert, holding steady and solid for the second-half fireworks. It was Jonny MacGregors Taranis impressively in second as the field came round after the first, long, lap, with Bonany Grimes Ferrari 458 Challenge third, then Gamski, a fast-starting Mark Cunningham’s Porsche 997, then Graham Lucking’s 458 Challenge, though challenge would be the watchword for the day for him and pro-driver Leyton Clarke, dogged by grip and handling issues which first showed themselves when Lucking suffered an off-track excursion on lap three, dropping him back into the Class 3 runners.

In the first of three TeamHARD G55s, Dudley and Hawkins-Row took the Class 3 endurance win

First-lap contentions in the midfield saw a clash between Simon Garrad’s Golf and Rick Nevinson’s Cayman, which sidelined the pair, and former BTCC star Patrick Watts was an early pit visitor in the Cuda Drinks Ginetta G50, while Chris Headlam was a late-starter from the pitlane in the Orbital Sounds Lotus Exige.

It was mainly the gentlemen drivers that pitted once the window was opened 20 minutes in, though eschewing this was TV celebrity Paul Hollywood, on the cusp of his allowable stint time before handing the Class 3 Beechdean Aston Martin Vantage to team boss Andrew Howard. Also leaving it late was Mark Cunningham, placing the family Porsche in the hands of friend Frank Bradley; Calum Lockie, leaving David Mason with over a minute lead in the 458 GT3; and Matty George, who had put the Whitebridge Aston back where it used to be, upsetting the Team Hard party a tad.

Wylie was now in the MJC Furlonger Ferrari, and taking chunks out of Mason’s tenuous lead; the lead change came when Mason had a sideways moment in the Loop, and Bradley had a moment in the Cunningham Porsche too. From that point, Wylie stroked it home, though behind him Johnny Mowlem, now in the 458 Challenge started by Grimes, was catching Mason. The smart-alec philosophers predicted this would happen on the last lap of the race, and so it did; the two Ferraris came nose to tail into the braking area at the end of the Wellington Straight, but there was a Ginetta negotiating Brooklands dead ahead of them. The two Ferraris clashed and spun, Mowlem recovering first and bagging second place, while Mason took a little longer to get going, but with enough time in hand to secure third.

The MacG Racing Taranis had won these Sprint races last year, but competition this year has intensified, so fourth overall was a stunning performance from Jonny MacGregor and Ben Sharich, finishing ahead of the Lucking/Clarke 458, then the first of the Class 3 runners, old hand Colin Wilmott and 16 year-old son Oliver, who breezed in from Switzerland as an invitation entry to sixth overall in their Porsche 997. Behind them in Class 3, though, normal service was restored by the three Team Hard Ginettas, with the order somewhat awry from previously, and with teenage sensations Angus Dudley and Callum Hawkins-Roe in the top points-paying seats, ahead of Darron Lewis/Tom Knight, and the usually-leading #24 car of Simon Rudd acting as tail-gunner, with Will Phiips stepping for Tom Barley, fending off Chris Murphy, who was only a little under two seconds behind in the Whitebridge Aston Martin at the flag, with the similar Hollywood/Howard machine a further quarter of a minute adrift. Rounding-up the Class 3 field, Mark Murfitt and Michael Broadhurst had a steady race in the Fox Motorsport Cayman, Frank Bradley steered the Cunningham Porsche 997 home to 15th overall, while lone driver Robert McFarlane’s Ferrari 360 was just ahead of Canadian Fareed Ali’s Newbridge-run Cayman, shared with Britcar’s very own Chris Valentine, after a trouble-free run, though they did attract an under-timed pit-stop penalty.

The Class 4 crown went to Sam Alpass and Jamie Martin’s Geoff Steel-run BMW E46 GTR, ahead of BTCC protagonist Stewart Lines in a SEAT Leon, and the newly-liveried "Gangsta" BMW E92 of Neil Garnham and Rob Young, and despite several wrist-slapping penalties from the officials, Simon Baker managed 17th overall in his BMW M3 E36, and the Cuda Drinks Ginetta G50 of Richard Burrows and Patrick Watts going the distance despite several pit stops to work on fuel-feed issues.

Class 5 offered some competition for the Synchro Honda Civic this time; an early spin by Alyn James in the Swindon employees’ team car probably didn’t overly influence the result, as there was no catching lone driver Barry McMahon’s Alfa Romeo 159, with Dan Wheeler sustaining second place in the Civic, a fair distance ahead of the Marcus Vivian/Derek Holden Ginetta G40, and the Roland Hopkins/Matt Sleigh VW Golf.

The Orbital Sound Exige expired at the entrance to the pit lane with Jamie Stanley on board, and the Tockwith Ginetta G50 of Ed Moore/Marmaduke Hall atypically failed with a fuel pump problem, while Mike Moss managed only four laps in the unique BMW 1M, which sadly saw no further action in the meeting.