Silverstone GP Race 2: Another Win for MJC Furlonger – In Sickness and in Health 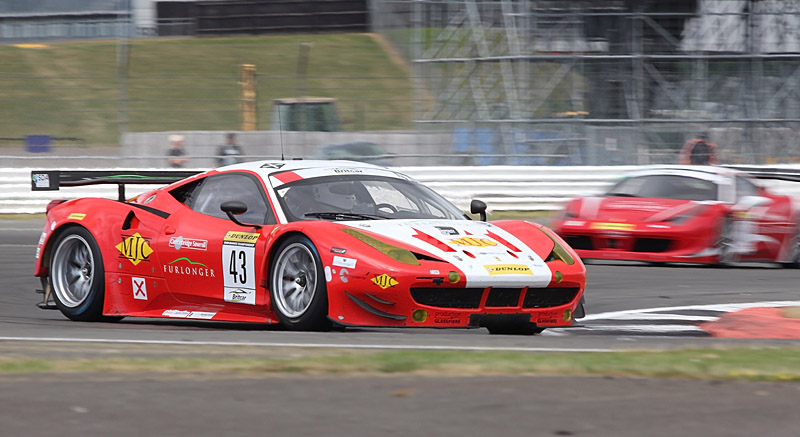 To be honest, based on qualifying and Race 1 performance, and all things being equal, this one never looked in doubt. The adrenalin had obviously taken over the chickenpox-bound Ross Wylie and hobbling Witt Gamski for them to take another win in the healthy MJC Furlonger Ferrari 458 GTE in the afternoon’s two-hour race.

Again, there was no deviation from the norm at the start, with Lockie blasting through from third on the grid to have a lead of nearly six seconds after the first lap, and Gamski dropping the GTE back to fourth, with challenge-spec 458s of Bonamy Grimes and Leyton Clarke, taking the first stint in the dark blue car, in between, making a top four of Maranello machinery. Ben Sharich, starting the Taranis, was up there too originally, but fell back and mounted a recovery drive in considerable pain due to a back issue.

The field soon became spread out around the long circuit, interspersed with some close skirmishes – the three Team Hard Ginettas were at it again, though Nigel Moore, the fuel pump now fixed on the Tockwith Ginetta G50, was carving through the pack, and set-about spoiling the party for Tony Gilham’s squad, though the Class 3 front-runners – the Porsche 997s of Mark Cunningham and youngster Oliver Willmott were way ahead in a lonely fifth and sixth overall. Paul Hollywood’s Aston was also enjoying a dice with Stewart Lines’ SEAT Leon, but Barry McMahon, the star of Class 5 in Race 1, was slowing, and soon retired the Alfa Romeo 159 with oil pressure issues. A loose rear wing on Simon Garrad’s VW Golf was easily dealt with by team-boss-for-the-day Peter Hignett with a swift whip of the wrist, and the car returned to the track without the aero device.

It wasn’t long before the Sprint competitors, racing only for the first 50 minutes, began to take their mandatory pit stops – Neil Garnham, Roland Hopkins, Stewart Lines, Rob McFarlane and Nigel Moore. So too Oli Willmott, who had attracted a five-second penalty for exceeding track limits, then lastly, Calum Lockie, handing the FF Corse Ferrari 458 to David Mason with a lead which this time would be unassailable in the Sprint category, and, when their 50 minutes were up, Mason took a victory around three-quarters of a lap ahead of Colin Wilmott’s Class 3 (Invitation) Porsche 997; the Swiss-based father and son duo had used this weekend as an indicator as to who was fastest, and it seems, now, that the child had become father to the man. Stewart Lines was third overall, and headed the Class 4 contingent in his Seat; "The car was punching above i’s weight, but this was tough, I’m only used to 25-minute races, I think I need a friend" he said on the podium, though the points-paying Class 4 victory went to Ed Moore and newcomer Marmaduke Hall in the Tockwith Ginetta G50 – redemption after the atypical fuel-pump failure in the first race – ahead of the Garnham/Young "gangsta" liveried BMW E92. The Fox Motorsport Porsche Cayman of Mark Murfitt and Michael Broadhurst took the top points in Class 3, sixth overall, ahead of Robert McFarlane in his FF Corse-run Ferrari 360 Challenge, while lone-driver Simon Baker (BMW M3 E36) tailed-off the Class 4 runners, and the RM Racing VW Golf of Roland Hopkins and Matthew Sleigh bagged the Class 5 victory. Sadly, damage in Race 1 meant that Rick Nevinson only completed one exploratory lap in his Cayman before calling it a day.

There was an Endurance race on the go, though, and first to pit for fuel – out of synch, really -was Patrick Watts in the Cuda Drinks Ginetta G40, signifying that all as not well fuel-wise with the car. With Lockie now gone, it was a change of fortune for the dark blue Ferrari, and Leyton Clarke held a 17-second lead over stablemate Bonamy Grimes’ similar red and white machine, who in turn was 24 seconds in front of Gamski. These two, though, pitted simultaneously at minimum-stint distance, leaving Clarke to head a distant Mark Cunningham, who was nevertheless well ahead of the squabbling Team Hard Ginettas. By this time, the Orbital Sound Lotus Exige had come to a halt at Luffield with repeat of the severe wheel stud issues that spoilt qualifying, and would play no further part in the race.

Once the pit stops had all been taken, and the race settled once more, it was close at the front, an all-Ferrari top three; Graham Lucking, capitalising on Leyton Clarke’s great first stint, and with handling improving as the track temperature dipped, held a tenuous lead over FF Corse colleague Johnny Mowlem (now in the 458 started by Bonamy Grimes), with Ross Wylie, who had made short work of reclaiming the deficit, on their tail in the MJC Furlonger 458 GTE. Lucking, though, had no answer to the seasoned professional and the talented young hotshoe on his tail, and within two laps the trio swapped places around – first Mowlem and Wylie passed Lucking, then Wylie took the lead in the more powerful GTE-spec machine.
Peter Cunningham had taken over the SG Racing Porsche from son Mark, and was fourth overall, but pressure was looming in the shape of the three Team Hard Ginettas, line astern in formation, and more significantly, from Jonny MacGregor in the Taranis, who was making great progress; Ben Sharich had done well to keep in contention in his opening stint despite suffering a mystery back condition which earned him a visit to the medical centre once he was out of the car, and now McGregor was showing what his self-engineered creation could do. A slower-than-usual lap from Cunningham allowed the whole quartet through, with McGregor capitalising on the opportunity to get ahead and pull away from the Team Hard party. Further drama ensued when Johnny Mowlem’s Ferrari slowed from second place and crawled smokily into the pit lane, lubrication issues putting an end to the race for the #5 machine.

TV personality Paul Hollywood, in his first race meeting after a lay-off, had done a solid job in the Beechdean Aston Martin, climbing as high as sixth place before handing over to team boss Andrew Howard, and now Howard was displaying his considerable BGT Champion and Le Mans provenance, working through to the tail end of the Team Hard trinity, and splitting them up by getting ahead of the Rudd/Phillips Ginetta.

It could have been a cruise to the flag at the front, but the two leading cars, reasonably safe from each other, and the following Taranis, chose to pit late-on. Wylie brought the leading MJC Furlonger car in in the final 20 minutes of the race, no fuel was put into the seemingly economical 458 GTE, but Witt Gamski was strapped in to take the car to the flag, not something he usually sees, while Graham Lucking pitted even later in the FF Corse Chlllenge-spec 458, perhaps in the hope that Pro-driver Clarke may be able to get on terms with Gamski as the race came to as close. A single dump-churn of Sunoco was added for good measure, but it wasn’t to be, and Gamski took another win, just over a minute and a quarter ahead of Clarke, with the superb MacGregor, the Sunoco Driver of the Day, having a trouble-free run in the Taranis to claim third overall, a lap down.
Class 3 was the most populated class, and where the action was intense. The Team Hard order was upset this time, and the day belonged to the teenage duo of Angus Dudley and Callum Hawkins-Row, who had made a clean sweep of the class win in both races, Dudley’s storming stint in Race 2 earning him the Britcar Driver of the Day award. Team Hard’s diverse driver roster was apparent with second-placed Tom Knight and former banger, short-circuit and everything-else racer Darron Lewis, while usual front-runner Simon Rudd, partnered for this event with Will Phillips, finished atypically off the class podium, having given best to Andrew Howard’s Beechdean Aston Martin, after a solid stint by race-returnee Paul Hollywood. The Cunningham’s Porsche was next up, unable to convert the pace that earned them pole position into race success, followed by the Chris Murphy/Matty George Aston Martin, with Murphy now moving forwards with a pro-driver to share with, while after some non-starts earlier in the year, the Fareed Ali/Chris Valentine combo made it to the flag without issue in the Newbridge Porsche Cayman, their clean performance whilst in close competition earning them acclaim from Barry McMahon and Alyn James.

The #38 BMW M3 GTR of Sam Alpass and Jamie Martin

Class 4 was taken by the Geoff Steel-run BMW M3 GTR of Sam Alpass and Jamie Martin, which had been as high as fifth overall midway through the race, due to Alpass maximising his stint length during the pit-stop window. The Cuda Drinks team adopted a two-stop strategy, though, to compensate for fuel feed concerns, and Richard Burrows/Patrick Watts finished as class runners-up.

An early spin, and a late pit stop for tyres didn’t stop the Synchro Honda Civic of Alyn James and Dan Wheeler from bagging the Class 5 honours, and some sterling work by the Track Focused team to get their VW Golf onto the grid was rewarded by a class podium finish for Danny Russell and regular historic racer Simon Garrad, undeterred by the swift removal of the Golf’s errant rear spoiler.

With no Safety Car deployed all day, this was an event where driving standards were roundly applauded by the competitors, and where talented youth, gentleman racers, professional drivers and hobbyists shared the track on an equal basis, and with due respect. And lest we forget, our race winners weren’t in the best of health. Viva Britcar!!