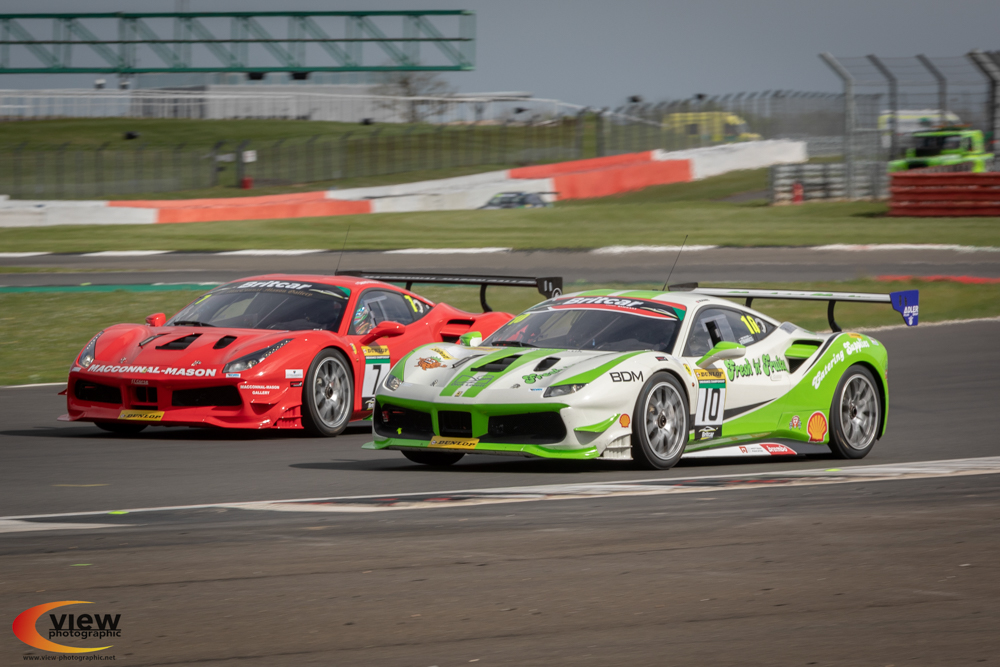 Wayne Marrs and Charlie Hollings, in the FF Corse-run and Fresh’n’Fruity sponsored Ferrari 488 Challenge, took a popular win in Race 2, in which the Class 1 runners were virtually wiped-out by attrition.

Taking no part in the second race of the day would be the ALP Racing Saker (gearbox), The Track Focused Ferrari 488 (electrics), the Moss Motorsport BMW E36 (power steering), and Barry McMahon’s Alfa 156, while starting at the back would be Sam Neary in the Team Abba BMW GTR, the close accelerator/brake pedal proximity that caused the Race 1 incident now rectified, and starting from the pitlane was Ben Sharich in the MacG Racing Taranis.

The red lights held the pack until the last moment, and making the most of the frustration was Chris Hart, who pushed the green Saker through from the fifth row to lead on the opening lap, whilst also wasting no time was Sam Neary, passing 14 cars to break the timing beam on the first lap in ninth position. Hart held the lead for three laps, whilst his team mate Paul Rose’s bad day continued, parking the black #3 Saker on the grass towards Stowe. By the third time round, second place man Ross Wylie had seen enough, and grabbed the lead in the red FF Corse Ferrari 488, and a lap later, the VR Motorsport Praga, with Al Boulton taking the opening stint, took the Saker too. Behind the top three, Marrs was holding off Paul Bailey’s 488, and Mark Cunningham was upholding Porsche honours, and 17-year old birthday boy Sam Neary had gone just about as far up the order as he could in the BMW.

Martyn Compton was straight inta the pits (NWA fans will get that), the Team BRIT Aston Martin stuck in third gear, whilst on track, some lively sparring was taking place, Marcus Fothergill’s Porsche and Sam Alpass’s BMW vying for Class 4 position, whilst there was an inter-class battle between Ian Humphries in the Valluga Porsche and Ben Dimmack in the RAW Motorsport Ginetta G55, so fraught that both cars attracted the attention of the men in serious trousers, who awarded a five-second penalty for a track-limits infringement to each of them.

The progress of the Taranis was halted prematurely, and the car was sadly retired with alternator failure, the first DNF for the MacG team for many years.
Marrs and Bailey were the first of the heavy-hitters to make their mandatory stops, the two 488s coming in for the pro-drivers, Charlie Hollings and Andy Schultz, to make a 35-minute run to the flag. "We’re aiming for the class win, and an overall podium" said Marrs, somewhat understating what would unfold. The Praga came in two laps later, Boulton handing over to Tim Gray, but all was not well, and just after jut a few more laps, Gray was pitbound- a bolt on the rear wing had sheared, rendering the unit unrepairable, and the car was sadly retired.

Leaving it late, as usual, to make their stops, were Mark Cunningham, up to third place in the SG Racing Porsche, and Ross Wylie, handing the leading #7 FF Corse Ferrari 488 to David Mason. At this point, the Saker of Chris Hart inherited the lead, but the rule that no driver may do more than 60% of a race had now been exceeded, and a penalty loomed. That was only one of the issues, though, that the JPR team had to deal with; when Hart eventually did pit, several minutes after the deadline, the vibration he reported was found to due to broken splitter. Steve Harris rejoined, and was immediately called-in for drive through penalty for a refuelling infringement.
Meanwhile, out on track, Charlie Hollings was taking large chunks out of FF Corse stablemate David Mason’s lead, and took over first position with a quarter of an hour of the race to run, while George Agyeton had got his BMW M3 running and made late start to the race.

The remaining Saker returned to the pits once again, this time for a left rear puncture, adding to it’s litany of woes, but this wasn’t the end to JPR’s miserable afternoon – the officials issued the drive-through penalty for exceeding stint time, just before the end of the race, and Steve Harris served his punishment in the pit lane as the chequered flag fell.

While this was going on, Andy Schultz had taken David Mason for second place, and thus three Ferrari 488s graced the front of the field, whilst back in the mix, Warren McKinlay was looking racy in the Team BRIT Aston Martin, the earlier gear selection problems seemingly fixed, and Ash Woodman was in no mood to hang around in the BPM SEAT dicing with Dave Benett’s Porsche.

And so it ended, after 27 laps, Class 2 Ferraris taking the overall podium, Wayne Marrs and Charlie Hollings’ FF Corse 488 Challenge winning by nearly 10 seconds over the similar SB Racing machine of Bailey/Schultz, in turn about half a lap ahead of the other FF Corse car of Masson and Wylie, Marrs’ solid drive winning him the Sunoco Driver of the Day award.

Such was the attrition, but nevertheless due to a stunning performance once again, we saw the Class 4 BMW GTR of Richard and Sam Neary in fourth place overall, thanks in no small measure to Sam’s ruthless ascendance from the back row in the early laps – once senses that the child is becoming father to the man here. There was a familiar story with our two Porsches in Class 3 – Mark Cunningham was the best of the rest behind the big-ticket cars in the first half of the race, with IAan Humphries in the Valluga machine behind, but it swapped around towards the end, with Adam Hatfield taking the class honours ahead of Peter Cunningham, these two sandwiching the remaining Class 2 finisher, Ben Dimmack and Steve Burgess in the RAW Motorsport Ginetta G55.

Behind the untouchable Nearys in Class 4, guest driver Rob Gilham eschewed the CTR Alfatune team’s laid-back reputation with a spirited final stint (after taking over the SEAT from Chris Bentley) that earned them second in class, ahead of take-no-prisoners Tim Docker’s VW Golf, both drivers posting an identical personal fastest lap of 2:17.031. Behind Docker, at last – AT LAST – Paul Calladine had a decent result, sharing the EDF-run Ginetta G50 with Graham Roberts, and with Roberts posting the second-fastest class time, it shows the potential is there. No accolades for lone driver Sam Alpass in the BMW M3 "Pearl" this time, though his solid drive in Race 1 did earn him the Britcar Driver of the Day award, and 16-year old Moh Ritson got to grips with the Tockwith Ginetta G50 started by W Series contender Sarah Moore, ahead of Guy Colclough’s SEAT, while Ash Woodman’s tenacity built on Martin Byford’s opening stint in the BPM SEAT, eventually coming home seven seconds ahead of the Bespoke Cars Porsche of Marcus Fothergill and Dave Benett.

Our three Class 5 contenders completed the finishers – not close together, but seemingly trouble-free runs from Chris Murphy’s BMW Z3, and the Honda Civics of Andrew Stewart and Arthur McMahon. Sadly, still running at the end, but not classified as finishers, were the Hart/Harris Saker, the Team BRIT Aston Martin, and the redoubtable George Agyeton in his BMW.