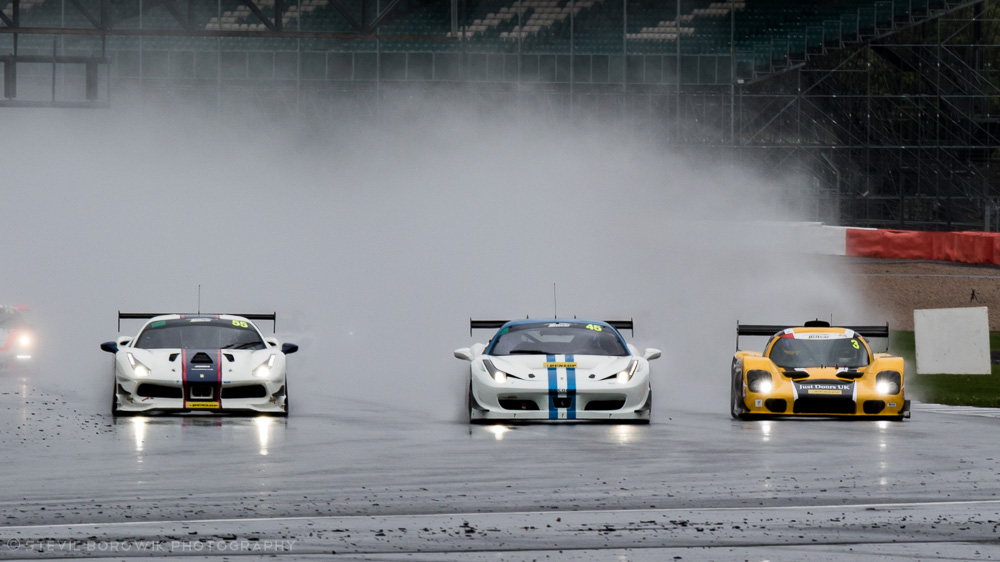 John Seale, up to now driving alone in Britcar, had been knocking at the door and showing all the signs of a class victory as his season progressed, and now, teamed with pro-driver Jamie Stanley (winner of three Sprint races on the bounce), he was able to take an overall victory in the JMH-run Class 2A Ferrari 488.

It wasn’t plain sailing for anybody – though sailing might be a rightful pun given the atrocious conditions. Heavy rain from daybreak had left the track awash, and barely seven minutes of the planned 20-minute Free Practice session had elapsed before the red flags were thrown, the Michael Igoe/Adam Wilcox Porsche 991 Cup and Rob Baker’s Smart 4Four having aquaplaned into the barriers, leaving both cars heavily damaged and Baker sustaining some broken ribs. With the pouring rain persisting, the normal qualifying format was abandoned, and each driver in each car would perform three mandatory laps behind the Safety Car, the grid selected by firstly, class, then championship positions within the class, leading to an interesting jumble.

A shambolic start – front row sitters David Mason (Ferrari 458) and Jonny MacGregor (Taranis) were initially on track ahead of the Pace Car – was compounded by misinformation and confusion regarding the lights-out procedure, which saw pole-man Mason follow the Pace Car into the pit lane while the rest of pack – 27 cars – took the rolling start. Three abreast and a cloud of spray into Abbey – two white Ferraris and a yellow Taranis – but it was Fulvio Mussi’s ff Corse 458 that took the lead, followed by MacGregor’s Taranis, and Seale’s 488. Mason, now into the race, was stone last, and in the gruesome conditions was going to make little progress, so an early stop was made for pro-driver Ross Wylie to take over and chase atonement. The two Butler Ginetta G55s of Lee Frost and Lucky Khera were capitalising on their high-end starting positions, and scything through the spray from the back were Richard Neary’s BMW M3 and Joey Foster in Chris Headlam’s Lotus Exige. In Class 3, Tom Barley’s Ginetta G55 led Ross McEwen, who had got the jump on team-mate Mike McCollum’s KTM X-Bow, and a cautious Nick Scott-Dickeson in the other #285 Ginetta, while looking particularly racy in Class 4 was Chris Bentley, taking the fight to the Ginettas in his SEAT Leon. 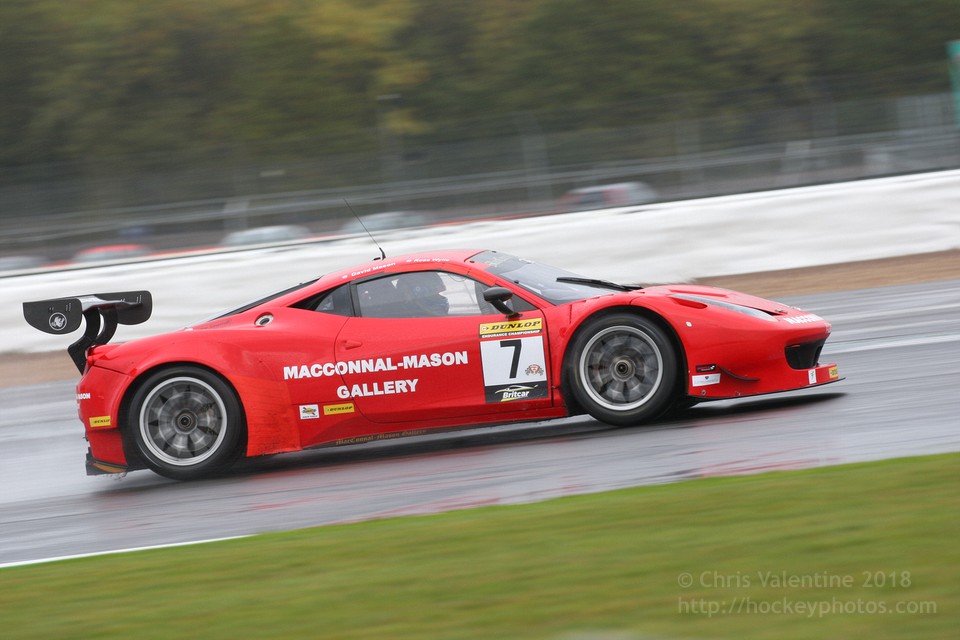 The early pit stop for the Mason/Wylie Ferrari meant that it was three laps down on the leaders, and, whilst Wylie was cutting through the field with impunity, little real headway could be achieved until the leaders made their mandatory stops. As it was, leader Mussi held out as one of the last to stop, handing over the ff Corse Ferrari 458 to absolute beginner Ronnie Garrick, whose racing debut was sadly short-lived. John Seale, after passing the reins of his 488 to Jamie Stanley, had commented that the standing water at the end of the Hangar Straight and Pit Straight was particularly tricky, and first-timer Garrick proved the point, hitting the wall going into Abbey, and sadly retiring the erstwhile leading car with rear-end damage. This marked the start of several incidents at the same place; Alex Day, tackling the race alone in the ex-Rob Austin BTCC Audi A4, was caught out in similar fashion, retiring with damage, and Chris Murphy’s Aston Martin got rear-end assistance from Ollie Willmott, who had taken over the Astra from Darelle Wilson. The Aston joined the other retirees in the Abbey "dead" car park, while the Astra limped back to the pits with front-end damage.

Meanwhile, Wylie carried on, heroic and seemingly undeterred by the atrocious conditions, and, now on the same lap as leader Stanley, was mounting a serious challenge. Alas time ran out, and as the flag fell, just four seconds separated the winning 488 and the 458 runner-up, with Ben Sharich bringing home the Taranis started by Jonny MacGregor in P3, a lap down and the first of the Endurance contingent. 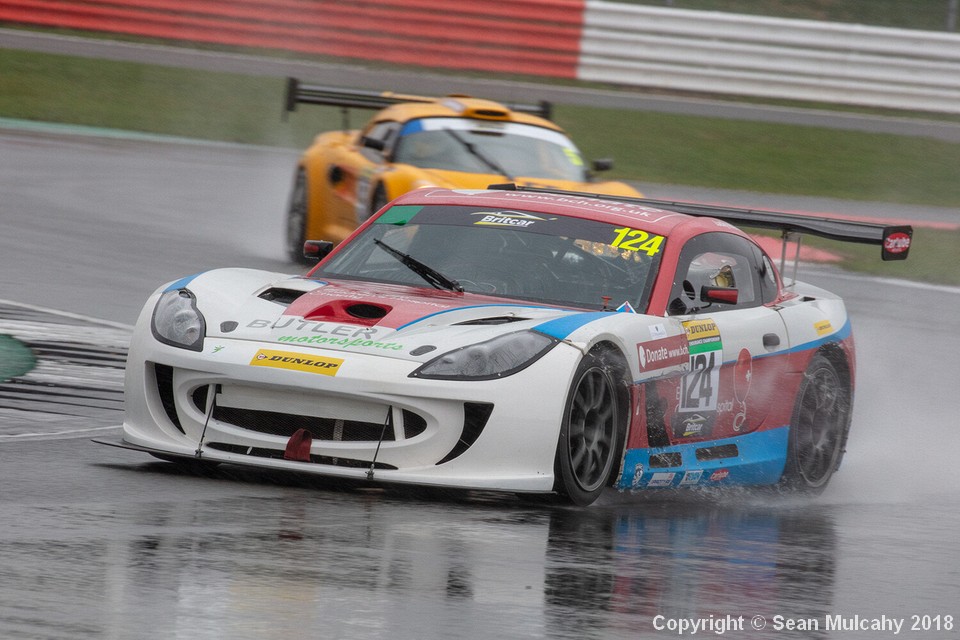 The Butler Motorsport Ginetta G55s were impressive, if occasionally pit-bound, and Lee Frost’s third and Lucky Khera’s fifth place in the Sprint category were fair reflections of their performance, while sadly the team’s BMW, driven well by Piers Reid, retired two laps from the end. Sam Neary capitalised on dad Richard’s early stunning stint in the ABBA Commercials BMW M3, finishing fourth, ahead of a raft of Class 4 runners: Guy Colclough and Max Coates took class honours in the SEAT Cupra, ahead of the Tockwith Ginetta G50 of Ed Moore and Marmaduke Hall, and the Jon Watt/Kristian Prosser BMW M3, then John Clonis, who had taken over from Chris Bentley’s impressive run in the SEAT, and lone-driver Tim Docker’s VW Golf. Splitting these was the stunning Class 3 McLaren 570 of Matt Cherrington and Stuart Willson, run by Track Focused. The two Porsche 997 GT3s in the race were well up at the start, but the rear-engined machines would have been challenged to lay their power down, hence Colin Willmott/Adrian Linggi and Dave Benett/Marcus Fothergill finished further down the order than you might have expected, and Andy Napier – disappointed by the early demise of Class 5 running-mate Rob Baker – took no chances in his Lotus Elise. Mike Moss, despite soliciting some expert advice on handling from Calum Lockie during testing, was unable to fulfil the potential of his unique BMW 1M due to persistent electrical glitches.

In the Endurance category, Mike McCollum and Sean Cooper bagged second place, taking the valuable Class 3 win too, in the Track Focused KTM X-Bow, ahead of Chris Headlam, who carried on Joey Foster’s great early stint in the Orbital Sound Lotus Exige, finishing ahead of title-chasers Simon Rudd and Tom Barley’s Ginetta G55, who got the better of the Ross and Sandy McEwen KTM in the second half of the race, with the #285 Team Hard Ginetta G55 next up, featuring the disparate experience of Sam Randon and relative novice Nick Scott-Dickeson. In Class 4, Sarah Moore and Matt Greenwood in the Tockwith G50 had a solid run to second, and the first points-paying position, whilst Canadian Fareed Ali held his Cayman steady, conscious of needing it in good condition for racing at another circuit the next day.