Silverstone Race 2: A Win At Last For Mason and Wylie 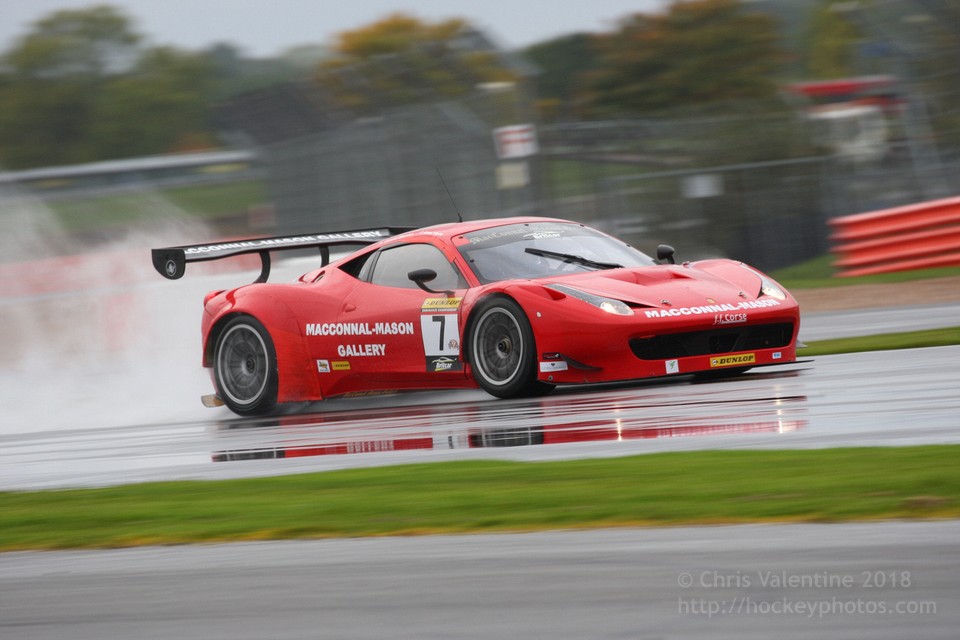 David Mason gave it everything in wet conditions to capitalise on Ross Wylie’s opening stint, to claim the duo’s first overall win in the FF Corse Ferrari 458 GT3.

This would be a foreshortened race for the Endurance contingent, the adverse weather and potential timetabling issues determining that they would run only for the same planned 50 minutes as the Sprint racers. Not taking part would be the Race 1 winner, a broken brake calliper discovered post-race putting paid to any further involvement from John Seale and Jamie Stanley’s Ferrari 488. Also sitting it out were Lee Frost’s Ginetta, The Wilson/Willmott Astra, and the Garrick/Mussi Ferrari 458, whilst the teams did sterling work to get the damage fixed on Chris Murphy’s Aston Martin and Alex Day’s Audi A4.

A clean start in the wet conditions this time, with Ross Wylie taking an immediate lead over Jonny MacGregor’s Taranis, then Neary’s BMW, the two KTMs, a very fast-starting Colin Willmott, and likewise Marmaduke Hall’s Ginetta G50. Lucky Khera’s early race was marred by a slow lap – a spin maybe – which dropped him down the order, only to be repeated a little later as he was clawing his way back into contention, but stablemate Piers Reid was up into the top 10 in his BMW M3 and would maintain his progress throughout the race, while a pit stop for Chris Headlam dropped the Lotus Exige to the tail of the field. 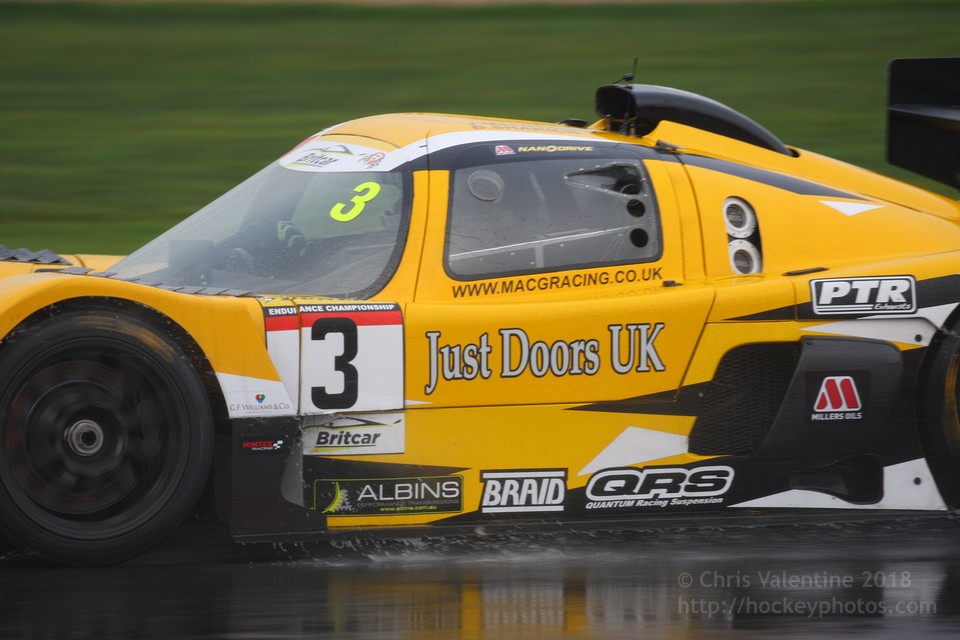 Ross McEwen was on a roll this weekend (which would earn him Britcar Driver of the Day), the better of the two Track Focused KTMs at this stage, and worrying Richard Neary’s BMW for third place. Meanwhile Alex Day was in for some giant-killing, cutting through from the back of the field in the Audi and taking 13th place from Stuart Willson’s McLaren. Marmaduke Hall’s great start came to an end 15 laps in, the engine in the Tockwith Ginetta G50 cutting out on the circuit – the never-say-die Nigel Moore hurried round to try to get the car started, but to no avail.

When the mandatory pit stops were taking place, Ross McEwen left it late, placing the KTM third on the road before handing over to dad Sandy; Alex Day, atoning for his DNF in Race 1, was running fourth before making his stop.

David Mason inherited a healthy lead from Ross Wylie after the mandatory pit stop, but would now have to stave off the advances of Ben Sharich, who had relieved Jonny MacGregor in the Taranis. The gap, originally three-quarters of a minute, was coming down by about five seconds every lap, and with 15 minutes left to run, a win for the Taranis looked inevitable. But Mason responded – responded like he never had before, revelling in the wet conditions, and whilst Sharich was still bringing the gap down, it was now only one or two seconds a lap and by the time the flag fell, Mason was still 11 seconds ahead – additionally landing himself Sunoco Driver of the Day for his performance. Once again, the MacG Racing Taranis ran fast and faultlessly, a testament to Jonny MacGregor’s engineering and driving skills, while professional scheduler Ben Sharich kept it on schedule for the Endurance category win. 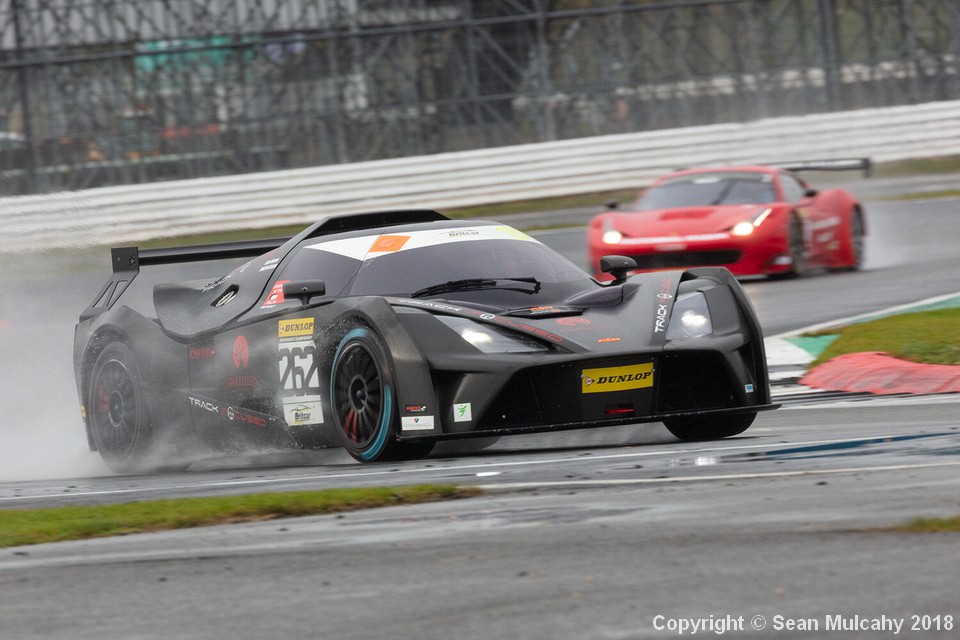 Behind these, Sean Cooper had taken team mate Mike McCollum to be the better of the KTMs, finishing third overall and taking the Class 3 victory, and the KTMs were separated by two Class 4 Invitation BMWs – Richard and Sam Neary were fourth overall, and an excellent fifth was lone driver Piers Reid in the Butler Motorsport M3, a sensational performance from the series newcomer.

While Alex Day took a late penalty for a pit stop infringement – rather spoiling an excellent race for him and pushing him back down to an unlucky 13th place – there was a fierce fight going on seventh place, and, importantly, the Class 4 championship points haul. Class 3 runner Tom Barley’s Ginetta G55 had been harried by Jon Watt’s BMW M3 for a while and as the clock ticked down, their squabbling had drawn them up to Max Coates’ SEAT. It was all change just two laps from the finish, Watt seizing the lead of the group in a move that saw Coates placed at the back of the triumvirate, and so they finished Watt (30 points, thank you), Barley, and Coates. Just four seconds behind this group was John Clonis, having taken over the SEAT of Chris Bentley, and bagging some valuable points for championship contention in what started out as a suck-it-and-see season.

Lucky Khera should have been in front of all this lot, but another a-typically slow lap in the Ginetta G55 (another spin maybe?) saw him come home 11th overall, though he did get his hands on the Class 2A winner’s trophy. 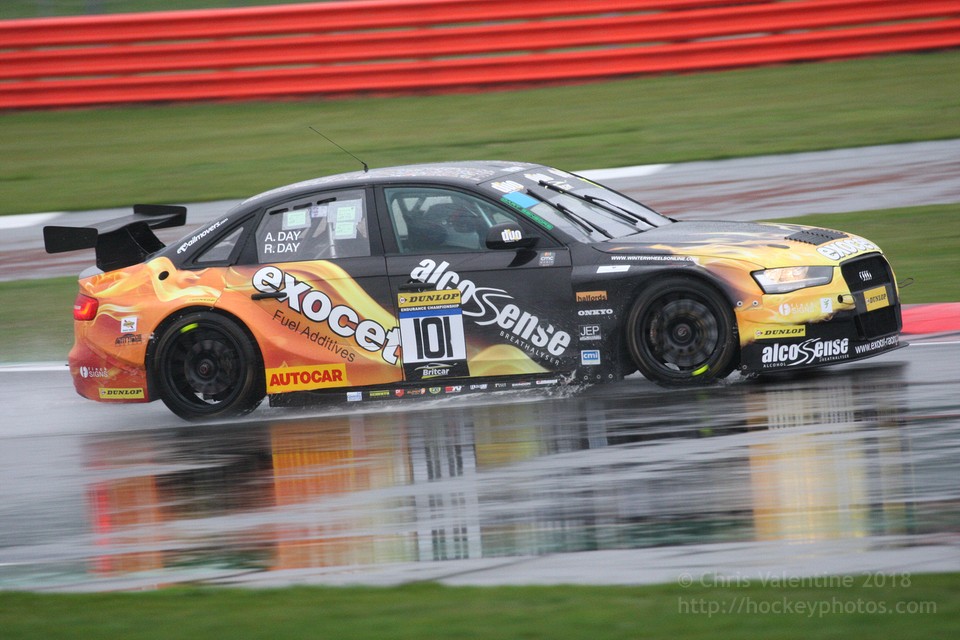 Tim Docker drove an understated race to 12th place in his VW Golf, and Matt Cherrington/Stuart Willson took no chances in their beautiful McLaren 570, while good starts in the early stages didn’t materialise into top-end finishes for the Colin Willmott/Adrian Linggi Porsche 997 and the Ginetta G55 of Sam Randon/Nick Scott-Dickeson. With little to prove in the hazardous conditions, Sarah Moore/Matt Greenwood (Ginetta G50), Chris Murphy (Aston Martin Vantage), Fareed Ali (Cayman) and Andy Napier (Lotus Elise) did what was necessary to finish, while Joey Foster’s Exige could barely make up time after the early unplanned pit stop in Chris Headlam’s stint, while the Marcus Forthergill/ Dave Benett Porsche 997 cruelly expired five laps from the end.

We go into the final rounds at Brands Hatch with some class titles up for grabs, and in Class 3 Endurance and Class 4 Sprint, 63 points are up for grabs at the final event. It’s all to play for!