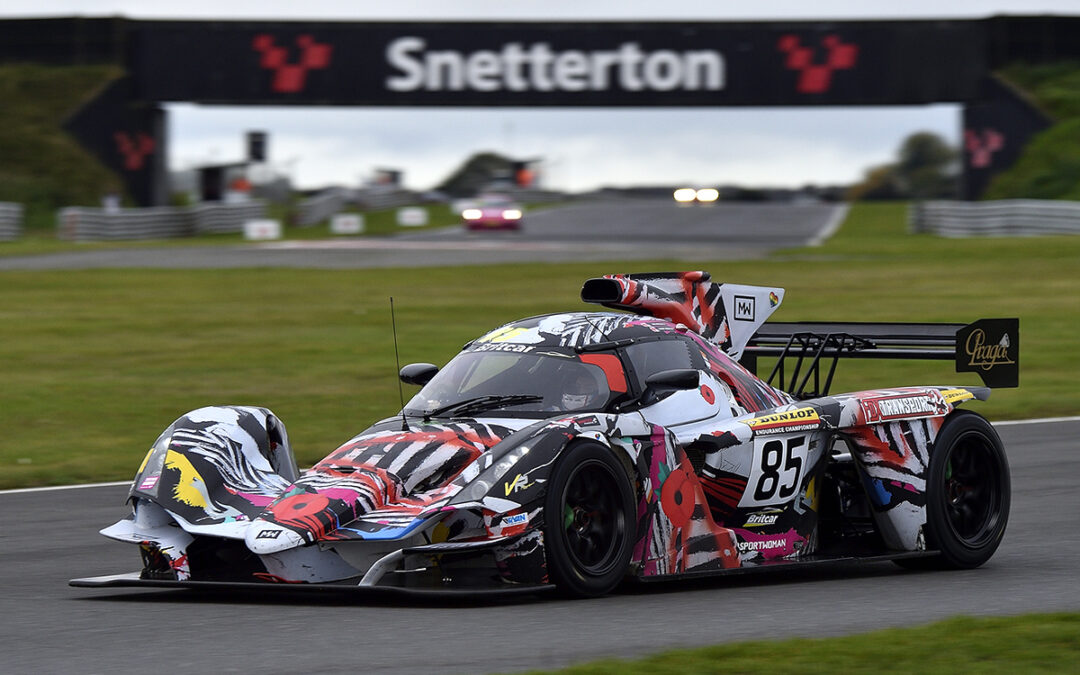 Danny Harrison and Jem Hepworth, in the VR Motorsport Praga R1T "art car" kept their title hopes alive by posting the win in the first Britcar Endurance race, though it was a hard-fought victory, as lone driver Jonny MacGregor dominated much of the race in the unique MacG Racing Taranis.

VR Motorsport had locked out the front row of the grid in qualifying, with the blue Fabby/Townsend R1T claiming pole just 0.653 ahead of the similar Harrison/Hepworth machine, though it was Paul Bailey’s Ferrari 488, from the second row, that got the jump at the rolling start, courageously powering down the inside through the first corner and taking the lead, ahead of main Class 2 rival Ben Dimmack’s Radical RXC. The Taranis was down to seventh on the opening lap, trailing the fast-starting Valluga Caymans of Nicole Drought and Lars Dahlmann, but was up to sixth next time round, then held fourth behind Townsend’s Praga. By this point, Dimmack’s Radical had begun to trouble the leading Ferrari, seizing the top spot on lap four, but this was to be short-lived, as the Taranis, now on a mission, took third place from Jem Hepworth’s Praga across the line, then Bailey’s Ferrari through Riches. Taking the lead was now a foregone conclusion, and this was achieved next time round, Dimmack conceding the place on the run past the pits. Once clear, MacGregor began punching-in sub-two minute laps, and by the time Dimmack brought the Radical in for the mandatory pit-stop, as soon as the window opened, the Taranis was the best part of half a minute down the road. Meanwhile, Warren McKinlay had been carving though the pack in the naturally-aspirated Praga, from the back of the grid after qualifying issues, while Nicole Drought, after a stunning start, had dropped down, as had Ash Woodman in the SEAT TCR. These were the first to take their mandatory stops, along with Dave Benett’s Porsche. Some significant front-runners were next to stop; the aforementioned Radical, Bailey’s Ferrari, and Jem Hepworh’s Praga. The leading Taranis left it late though, by which time Danny Harrison, having taken over from Jem Hepworth, was mounting his usual meteoric challenge, up to second place just seven laps after the pit stop, he was taking four seconds a lap out of MacGregor’s lead, and with less than a quarter of the 60-minute race left, took the lead, eventually finishing half a minute ahead of McGregor at the flag. Garry Townsend had kept the #84 Praga well placed during his opening stint, and Jack Fabby’s claw-back from the pit stop was as impressive as stable-mate Harrison’s, taking third place 10 minutes from the end from Ross Wylie, who had taken over Bailey’s Ferrari.

This was a crucial weekend for reigning champion Bailey – to stay in the hunt for the Class 3 and Overall titles, a class win was imperative. That atypical storming start by Bailey helped the cause, though he had to give best to the Radical’s superior roadholding, but it was the pit stops that won it for the Ferrari, the SB Race Engineering dwell time was some 14 seconds quicker than RAW squad, and from thereon Wylie was leaving nothing uncovered, posting a fastest class lap as Steve Burgess, now in the Radical, began to threaten, 28 seconds was the gap at the flag. Martyn Compton capitalized on McKinlay’s earlier carve-through in the camouflage-liveried Praga R1, coming home third in Class 2, and seventh overall, while the lone Class 3 runner, the Dave Benett/Marcus Fothergill Porsche 991, had the class title in their hands just by completing the race, so played it cool with an overall 13th place finish. 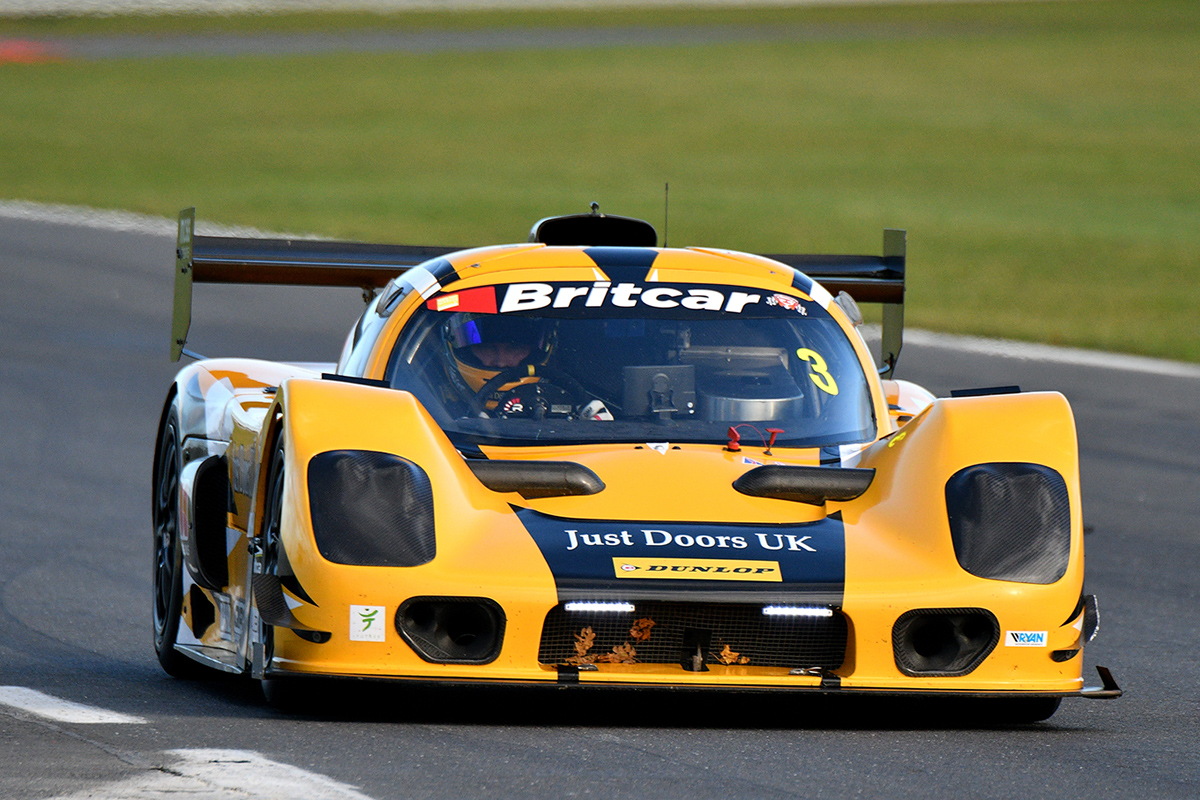 Jonny MacGregor drove the mighty Taranis solo for the final round


Sean Doyle posted an amazing recovery in the Valluga Porsche Cayman 718 started by Nicole Drought. Re-joining in 12th place after the early pit stop, he crept through the class order to sixth place overall 20 minutes from the end, and the Class 4 victory, ahead of Valluga team mate Charlie Hollings in the Invitation-entry Cayman started by Lars Dahlmann, another stunning drive, the two pro-drivers posting almost identical lap times. Third in Class 4 was another Invitation entry, the Maximum Motorsport SEAT TCR of Tom Hibbett and Bruce Winfield, amazingly, for a while during Winfield’s opening stint, the fastest car on track next to MagGregor’s Taranis. Claiming the points for second place in class was the Reflex Racing Ligier JS3-R of father and son pairing of Mark and Luke Davenport. Luke was one of two Class 4 drivers to run in second place during the pit-stop period (Bobby Trundley was the other one), and the podium for Class 3 points-scorers was completed by Peter Erceg in his PB Racing Cayman 981 after a solid drive, and Bobby Trundley, in the Team BRIT Aston Martin Vantage put in his usual stunning opening stint, leaving Britcar first-timer Charles Graham to finish 12th overall and pick up the class fourth-placed placed points, while Martin Byford, stymied by enduring a stop/go penalty for a pit stop infringement in the EDF SEAT started by Ash Woodman, finished an atypical fifth in class.

The Team Hard Porsche 911, running as a Class 3 Invitation entry, suffered an early pit stop during Eric Boulton’s opening stint, putting Jamie Martin on the back foot after the driver switch; they were the last classified finisher, while sadly the SEAT Cupra of Jonathan Beeson/George Heler, and the Newbarn Racing Jaguar F-Type of Callum and Adam Thompson both were classified as DNFs.