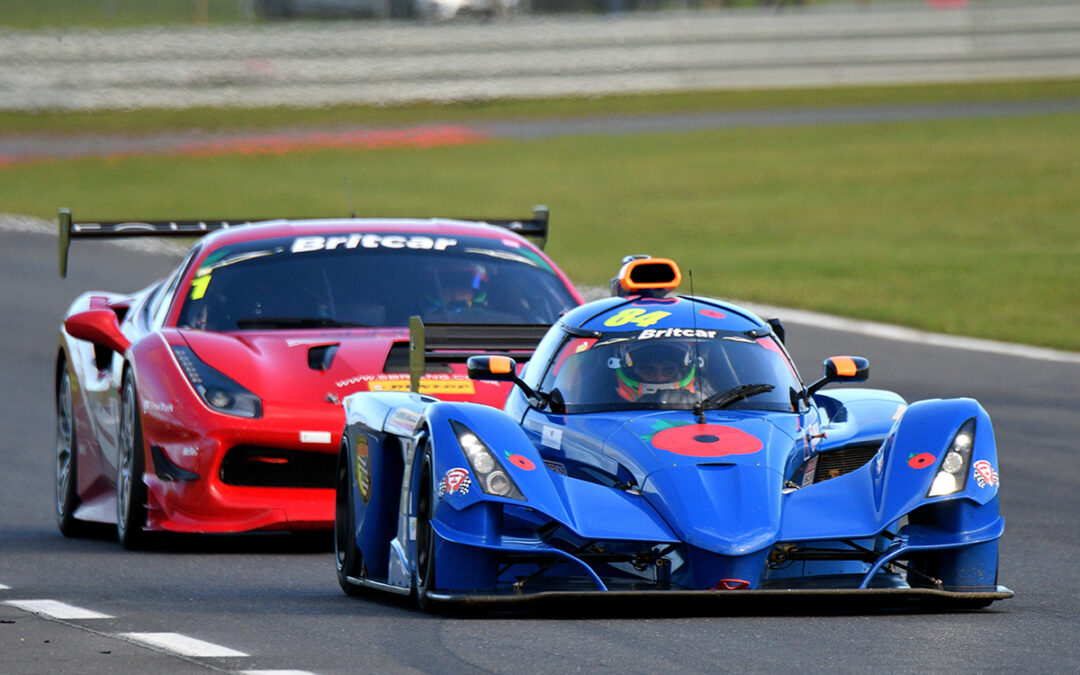 Jack Fabby and Garry Townsend took the win in the rain-blighted season finale, their Praga R1T finishing a quarter of a minute ahead of team mates Danny Harrison and Jem Hepworth, who claimed the Britcar Endurance Championship title.

It was Jonny McGregor who, expectedly, after his Race 1 performance, took an immediate lead at the rolling start, but threw it away with a spin as he came through Murrays for the first time. Such was the lead of the Taranis after just one lap though, he was able to rejoin still in first place, but conceded to Jem Hepworth’s Praga and Steve Burgess’s Radical while he re-adjusted to the conditions. Soon back up to second place, the Taranis trailed the Radical by around five seconds, and the #85 Praga dropped back in the increasingly damp conditions, with Paul Bailey’s Ferrari, on a mission once more, assuming third place, and Townsend’s Praga taking a spin. Spits of rain intensified , so much so that before long, a call for wet tyres would be inevitable, though some were obviously considering hanging out for the pit window to open. Just before that point, a cryptic "pit lane open" message appeared on the timing screen, causing a number of runners to scramble into the pits, while the leaders – Burgess, MacGregor and Bailey – waited for one more lap to the official pit window opening. Jumping into the lead, for one lap only, was Bruce Winfield’s SEAT, though he too pitted next time round. 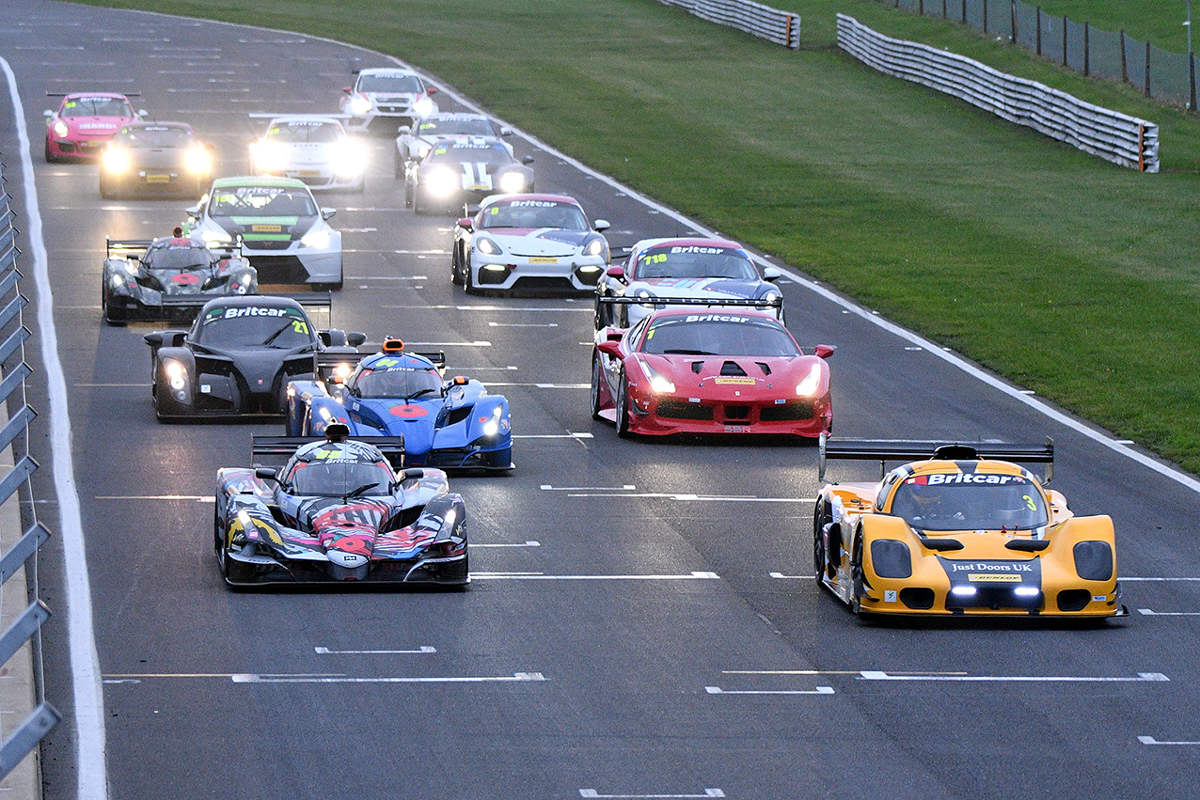 Once all the stops had been made, Ben Dimmack, now in the Radical, retained first place, with lone driver MacGregor still second, though there was now half a lap distance between them. A haze had developed coming from the rear of the Taranis, and the officials called the yellow machine in for investigation, with Jonny MacGregor later revealing:" The scrutineers wouldn’t let us out again – we identified a slight oil leak from the side of the block at Silverstone, and tightened the bolts, but couldn’t get to two bolts without dismantling a lot of the car; we thought we’d wait until the end of the season to sort it, but…"

The rain shower was short-lived, and with conditions improving, the Pragas were once more coming into their own. Jack Fabby took the lead from Dimmack six laps from the end, and Danny Harrison followed suit two laps later, the two VR Motorsport machines separated by 15 seconds at the flag. Dimmack’s third place, and the Class 2 victory, was now in doubt too; though nearly a minute behind, Ross Wylie, in the Ferrari started by Bailey, was clawing great chunks out of the advantage – 49 seconds, 35 seconds, 21 seconds as it came down lap by lap, till it was just eight seconds on the penultimate lap, and on the final tour, the Radical had no answer for the Ferrari, which bagged third overall and the Class 2 win by a five second margin. A second pit stop, a good call to go back to slicks in the improving conditions, had been the answer, and had enhanced their title aspirations.

Fifth overall, the first Class 4 car home, was Charlie Hollings in the Invitation-entry Valluga Cayman, started by Lars Dahmann, which had been well-placed throughout, finishing ahead of the Martyn Compton/ Warren McKinlay Praga R1, third in Class 2, and which had been taking six seconds a lap out of the Team Hard Porsche 911 of Eric Boulton and Jamie Martin towards the end, McKinlay taking sixth place from Martin on the very last lap. 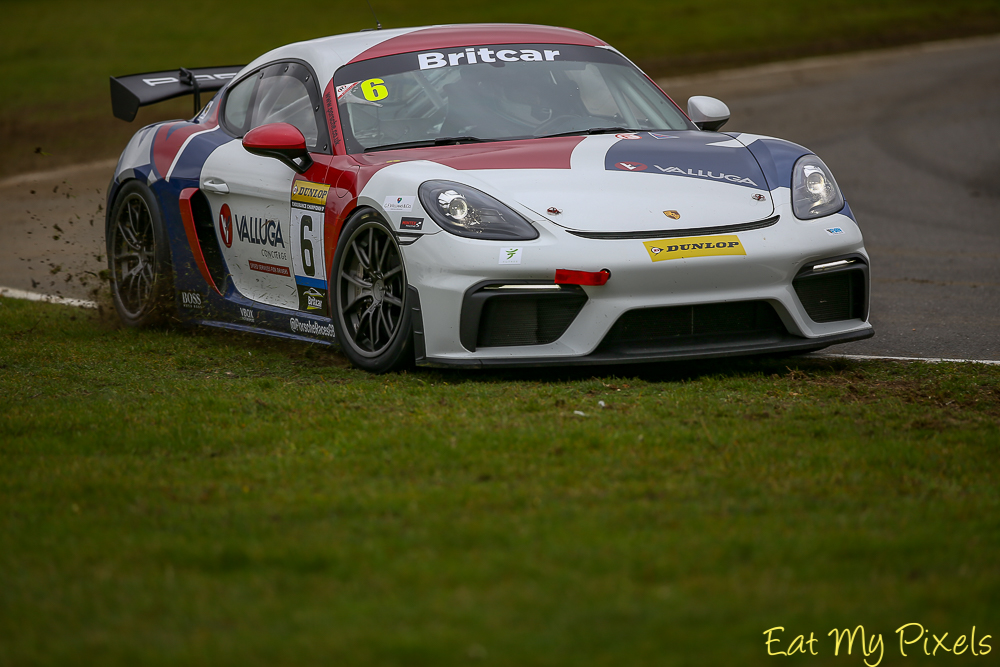 Nicole Drought made an early unplanned pit stop in the Valluga Cayman 718, dropping a lap, but Sean Doyle recovered when track conditions improved as the race came to a close – he trailed team mate Hollings this time, but being the first registered Class 4 runner home, claimed the full class points, bagging the Class championship runner-up position in the process, a great result for the Irish duo, in what was Nicole’s first foray onto unfamiliar English circuits. The Maximum Motorsport SEAT TCR of Tom Hibbett and Bruce Winfield was an unexpected star turn, Winfield’s opening stint being particularly impressive; third in Class 4 was their result, though, being an Invitation entry, the second and third place class points were taken by the Ligier of Luke and Mark Davenport, enough to secure the class title, and the Paul Sheard-entered SEAT TCR of Jonathan Beeson and George Heler, these two being split by line Class 3 points-scorer Dave Benett and Marcus Fothergill in the Bespoke Cars Porsche 991; with the class title sewn-up, they had nothing to prove, though Fothergill was making severe inroads into Mark Davenport’s advantage for overall position in the closing stages.

Peter Erceg’s Porsche Cayman, and the Team BRIT Aston Martin Vantage of Bobby Trundley/Charles Graham were next up, these two cars more or less holding their relative positions throughout the race, and two cars that started from the pit lane could do little more than swop positions – having had a diff change in just 45 minutes, the EDF SEAT joined the race a lap down, and Martin Byford and Ash Woodman performed as well as ever, taking the Newbarn Racing Jaguar F-Type of Callum and Adam Thompson when the weather worsened.