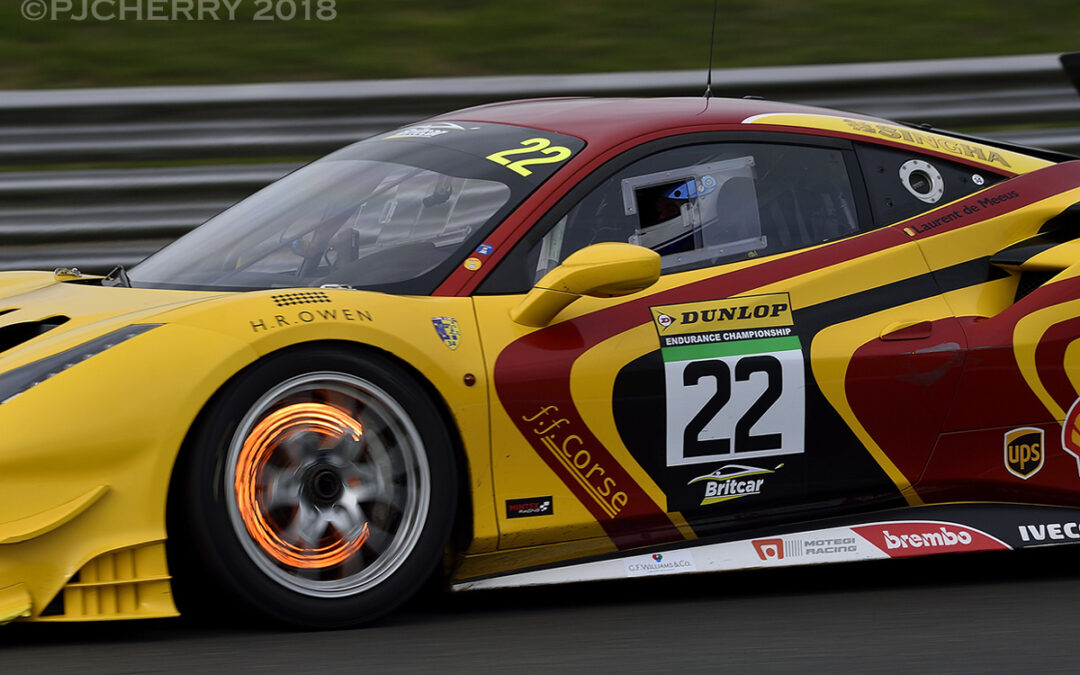 To be honest, barring incidents, the overall result was never in doubt to the hardened Britcar armchair analyst; as ever, hotshoe Ross Wylie bagged pole in the FF Corse Ferrari 458 GT3 he shares with owner David Mason, half a second to the good of stablemate Stanley’s best effort in the Class 2 488, and streaked off into the lead, building an advantage of around three-quarters of a minute over first-stinter De Meeus’s 488. The Belgian finance guru pitted three laps earlier than Wylie – does the undercut work in endurance racing? – and once Mason was installed in the leading 458, and the race re-settled, it took Stanley only three laps to take first position, posting the race’s fastest lap as he made sure of his assault, then settling for a run to the flag, after 25 laps in the 50-minute race.

Standard stuff, you might reckon, but behind this leading pair was a race of heartache, intrigue, and giant-killing.

Let’s deal with the heartache first, and start with Peter and Mark Cunningham; the father and son duo were having their first event together this season, after Peter’s enforced solo effort at Donington went pear-shaped with trouble for their Porsche 997 Cup. Mark, nursing the late-stage recovery of hip surgery, was straight back into his 2017 groove, proving the best-of-the-rest with third place on the grid, but a niggling oil leak determined for them that discretion was the better part of valour, and that withdrawing would eliminate the risk of fire, accident or a lunched engine. Then there was the #285 Team HARD Ginetta G55 of Sam Randon and Angus Dudley, sidelined with driveshaft failure at the start, and then the pair of Track Focused KTM X-Bows, who had, as you will see as you read on, a mare of a race.

Mike McCollum’s X-Bow was straight into the pits at the end of the pace lap, a single cold tyre having caught him out. New rubber, some bodywork re-configuring, and he was on his way, but from a last position from which he, and second-stinter Sean Cooper, would barely recover. Team mate Sandy McEwen was in trouble too, pitting at the end of the first racing lap. Son Ross took over straight away, but his drive was blighted by gearbox gremlins, and the pair finished well down the order. 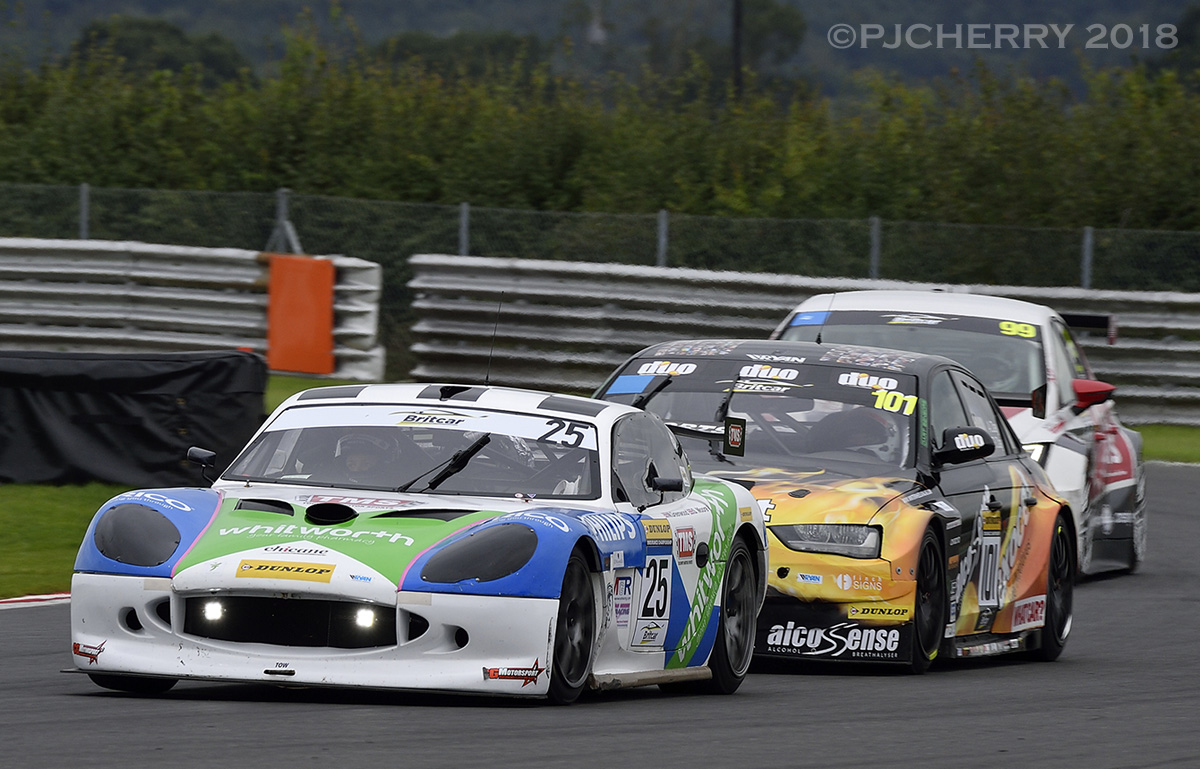 There was some good news though – it was a clean getaway as the red lights went out, and behind the leading Ferraris, Colin Willmott’s more powerful Porsche got the jump on Kristian Prosser’s BMW M3, and a fast-starting Alex Day had the Audi A4 "Sherman" well up the order. This would be short-lived, though, for others that faltered slightly at the start were getting into their stride; Sarah Moore’s Ginetta G50, then Clio Cup frontrunner and BTCC aspirant Max Coates, making his Britcar debut in Guy Colclough’s SEAT passed as well. Coates was showing his true mettle, taking Tom Barley’s Ginetta G55 and mounting a serious pursuit of Prosser’s BMW, holding fourth place, and the Class 4 lead magnificently. Other Class 4 action saw Tim Docker’s VW Golf chasing Chris Bentley’s similarly-specced SEAT, though several instances of light contact saw Bentley pit for repairs. Also pitting early was Mal Sanford in the EDF Aston Martin, the drying conditions after a short pre-race shower proving slick tyres would be better than the chosen wets.

The mandatory pit stops put paid to several pursuits on the road – Coates was up to second place before pitting – and once the race settled again, it was Guy Colclough’s SEAT and Jon Watt’s BMW behind the leading Ferraris, and disputing Class 4 honours. Watt’s outstanding performance saw him pass Colclough, who would have little answer to the group of Ginettas coming up behind.

As the clock ticked down, first Simon Rudd’s G55, the Matt Greenwood’s G50, passed the SEAT on the same lap, but the move by Ed Moore’s similar Tockwith G50 at Riches next time round didn’t come off as planned; there was a clash, which saw Colclough’s SEAT spinning into retirement, and the Ginetta carrying on minus its bonnet. And that wasn’t the end to the woes of Tockwith – Matt Greenwood just about made it to the flag with a loose front wheel hampering progress, maintaining his well-earned position.

So, a nice clean 25 laps in the 50-minutes for winners De Meeus and Stanley, who had a lap advantage over Mason and Wylie. Had the race gone on for one more lap, we could have seen the giant-killing performance of Class 4 runners Jon Watt and Kristian Prosser rewarded with second position, but third overall and the win in Sprint Class 4 for the Moss Motorsport / Woodrow BMW M3 was outstanding in any case. Teenager Ollie Willmott took over from dad Colin in their Porsche 997, taking fourth overall and the Class 2b victory, and making it a worthwhile trip for the Swiss-domiciled pair, while Team HARD’s Simon Rudd and Tom Barley were back to their winning ways, the first of the Endurance runners home, though only eight seconds ahead of the ailing Ginetta G50 of Sarah Moore and Matt Greenwood, who’s Endurance Class 4 win added to their points tally. Lone driver Tim Docker bagged second place in Sprint Class 4, ahead of the Reflex Racing Audi A4, started by son Alex Day and brought to the flag by dad Rob, while, despite that late race incident, the changes for the #15 Tockwith Ginetta G50 – elevated to the Endurance category, and with Marmaduke Hall starting the race instead of the time-honoured format of Ed Moore taking the opening stint – paid off with the teenage pair taking second in the Class E4. The delicious BMW M4 of Chris and Mika Brown endured some contact on its way to second in Endurance Class 3, ahead of the luckless pair of KTM X-Bows, while in Class 5, the ebullient Andy Napier took his Lotus Elise to victory ahead of the almost brakeless Smart 4/4 of Rob Baker and Lucas Nanetti. The SEAT of Chris Bentley and John Clonis was not classified, despite finishing the race after repairing damage, and a late-race issue for Mal Sanford’s Aston Martin caused a DNF to be posted.