Snetterton Race 2: Team Abba Again – The Winners Take it All 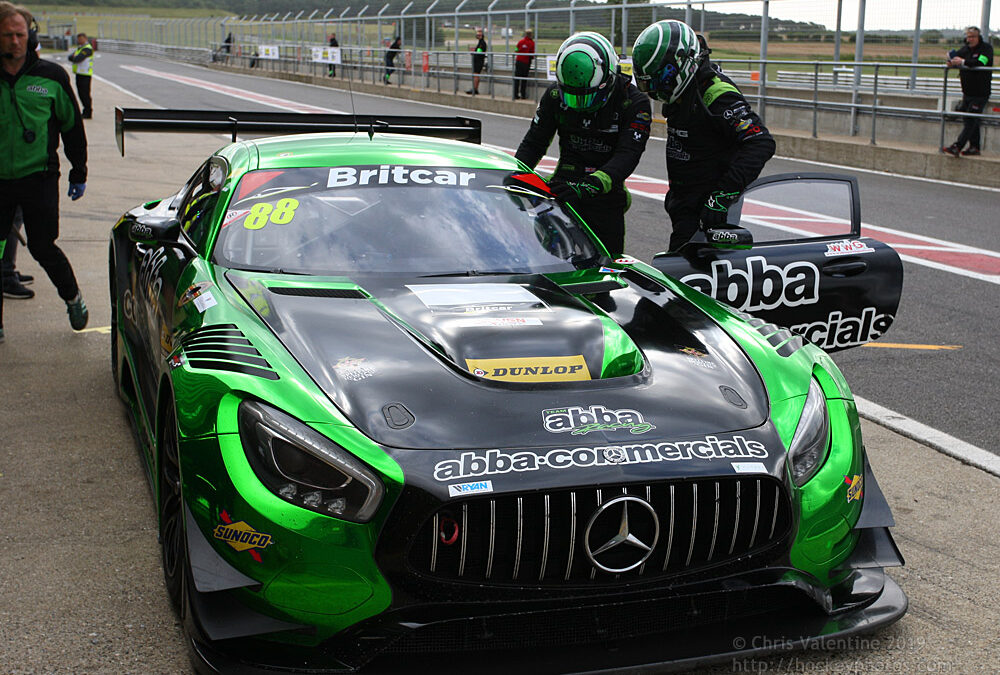 Richard and Sam Neary did it again, a clean sweep in the Mercedes GT3; pole, two wins, two fastest laps, the Sunoco Driver of the Day trophy for Sam for his record-setting achievement, and probably a trip to IKEA on Sunday for a new trophy cabinet. Being an Invitation entry, though, they weren’t scoring points, so behind them, it was business as usual for the registered entries.

Missing from the grid were the Tockwith Ginetta G50, and the VR Motorsport Praga, it’s fuel pump issues now deemed to warrant more investigation than first thought, and in a reverse of Race 1, with the Hart/Harris Saker now starting from the back, it was stablemate Paul Rose who challenged Sam Neary for the lead as the pack was let loose at the rolling start. Heavy, squally rain had blighted the formation lap, but it was over in less than a minute, and didn’t upset the start. Will Stacey’s G55 got the jump on Mark Cunningham’s Porsche, Paul Bailey’s Ferrari was trading places with Ben Sharich’s Taranis, and Emily Linscott had hauled the Hedgehog Securities Ginetta G55 up to ninth.

No luck for Chris Hart though, just three laps in the green Saker was pitbound to retirement with turbo wastegate failure, and rather spookily, the self-same issue would cause Paul Rose’s black Saker to retire too just a few laps later. There was some movement through the field – Paul Bailey, hedging a bet for any potential Safety Car period, was placing the Ferrari as best as possible, taking Steve Burgess’s Ginetta G55 for fifth, while Will Stacey was harrying the second-placed Saker of David Brise.

The mandatory pit stops came and went as expected – the amateur drivers pitting around 24 minutes in, the pro and faster drivers leaving it until 24 minutes to go, with the leading Mercedes splitting it straight down the middle, Sam Neary handing over to Richard dead-on the half hour mark. There were a few surprises though – lone driver Rob Baker pitting early in the Smart, Mike Price up to third in the Cayman, pitting late to hand over to pro driver Marcus Clutton, and Tim Docker, up to second overall exacting the lone-driver pit window status in the VW Golf.

Will Stacey had left the #101 Ginetta G50 in a good place for Sam Tomlinson to pick up on; leading during the pit stop period, and rejoining in second place, there was a Class 2 battle looming behind the Ginetta. Andy Schulz was capitalising on Bailey’s earlier work in the Ferrari, taking third overall, and importantly the Class 2 lead from Alan Purbrick’s Saker, then deposing Tomlinson for second overall. Behind them, a repeat of the Race1 Peter Cunningham /Ben Dimmack battle was starting again. This time they had an interloper – the VW Golf of Ru Clark, having taken over from dad Jeff, a lap down but as fast as the Porsche in front and the Ginetta behind; Cunningham couldn’t get away, and Dimmack couldn’t get past. Clark eventually unlapped himself from Cunningham and was away, by which time Dimmack now had not only a chase to pursue but a threat from behind. Marcus Clutton was going like the clappers in the Porsche Cayman started by Mike Price, and with six minutes left to run, took Dimmack’s G55, then in the closing minutes, Cunningham too.

There was late race drama for the MacG Racing Taranis, Jonny MacGregor bringing the car in with rear suspension failure, thought to be caused by the rear-ending in the first race.

Richard Neary cruised home to victory, the only Class 1 finisher, and just over half a lap ahead of Andy Schulz’s Ferrari, which bagged Class 2 honours, a lap ahead of Alan Purbrick’s Saker. Sam Tomlinson did a grand job in his first Britcar event, just 12 seconds adrift of the Saker at the flag, taking the Class 3 win, but, as an Invitation entry, not the points, which went to the heroic Peter Cunningham, who’s Porsche once again staved off Ben Dimmack’s Ginetta G55 again, just half a second separating them at the flag, while Perter Bassill held it steady in the Century-run G55 after Emily Linscott’s impressive opening stint, finishing ninth overall. The Class 3 results were interspersed with the Class 4 finishers. By dint of a stunning closing stint, Marcus Clutton took the class victory in the Forelle Estates Porsche Cayman a lap ahead of lone driver Tim Docker in the Maximum Motorsport VW Golf, while, despite having the legs of a Porsche and a Ginetta, Ru Clark’s Invitation-entry Golf was a minute behind Docker when the flag fell, with the Paul Calladine / Graham Roberts Ginetta G50 fourth.

No obvious issues for Rob Baker this time, the lone driver in the lone car in Class 5 runs at race pace nonetheless in the Smart ForFour, and is the worthy recipient of the class trophy.