Snetterton Trophy Race 2 – Oliver Smith: from the Guards Van to the Vanguard – and the Title

After a DNF in the very early stages of Race 1, Oliver Smith, in the JC Racing BMW E36, had a point to make, and cut through from the very back of the grid to win by around half a lap over Race 1 victor Richard Higgins. Smith had carved his way through half of the 20-car grid by the end of the first lap, then moved up progressively through to second place just seven laps in, taking the lead after the pit-stop period and keeping it easily to the flag, a supreme effort which earned him not only the win, but also the inaugural overall Britcar Trophy Championship title, though sadly for some, it would be a race where their championship aspirations frittered away.

Higgin’s Porsche led away from the rolling start, but it was Rob Smith’s Peugeot RCZ that took the lead during the first lap, with Jon Packer’s Smart following though, and Nick Beaumont’s Scirocco and Kelly Brabbin’s Toyota making up places too. An early pit visitor was Anthony Hutchins, his Boxster suffering engine problems which would cause a retirement after running faultlessly all season, a cruel blow to his chance for the title. Similarly, another title-chaser, the Vinna Sport Ginetta G40, which had raced without major issue through the season, would go no further than the pit-stop window, Adriano Mederios bringing the car in with terminal gearbox issues.

Jon Packer, in the Smart For4 assumed the lead during the pit window, pitting late in the sequence to hand-over to Rob Baker, and second-place Higgins left it till the window was just closing too, as did MacG’s Kelly Brabbin, in third place. Higgins only lost his second place for the lap that he pitted, but there was an amount of traffic between him and Oliver Smith in the leading BMW.

Rob Baker only just made it to third place; Tony Prendergast’s Scirocco had been bringing the gap to the Smart down lap-by-lap, but Baker responded, the gap being less than a second at the flag. Prendergast had recovered well from a pit-stop penalty, has had J.W.Bird team mate Matt Evans, these two being fourth and fifth, though the third car in the group, the Beaumont/Clynes VW, posted an early retirement. 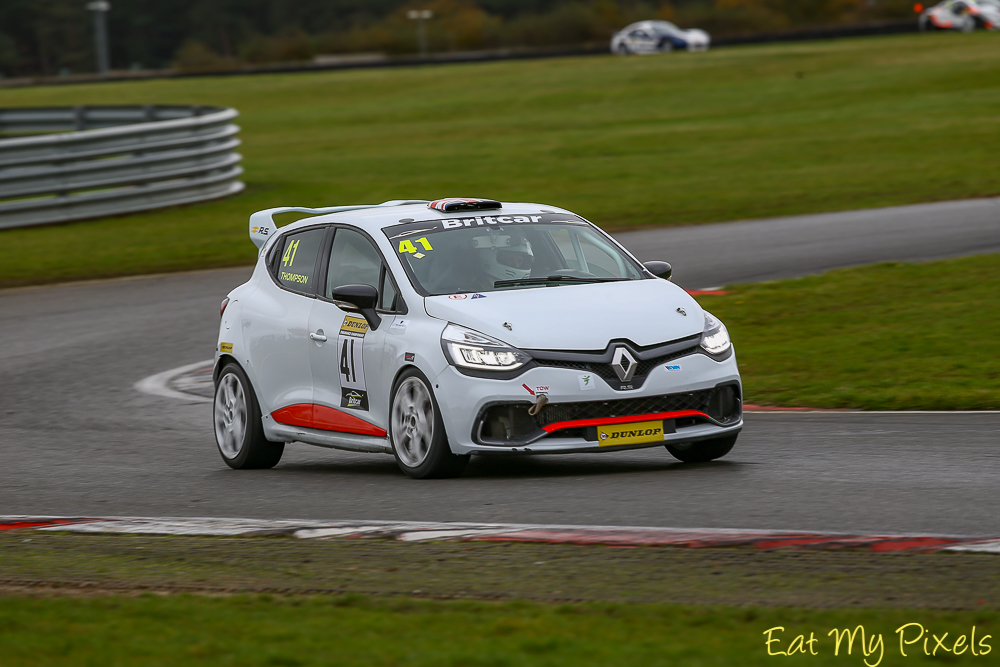 Steve and Aaron Thompson sealed the Clio Class title, sixth overall, while class rival Darren Geerearts excelled once again in the Gen4 Clio shared with Anton Spires, in eighth place, while splitting the Clios was the erstwhile leading Peugeot RCZ, Charlie Campbell having taken over from Rob Smith. Kelly Brabbin was the leading Class 7 finisher, Invitation entry or not, she won the class in her Toyota Celica – two weekends, three class wins, not bad for a lady that has spent most of the season driving the MacG Racing transporter. The Ramen Racing Ginetta G40 of Peter Spano and Charlie Hollings, third in Class 6, split the remainder of the Class 7 runners, who were headed by top points scorer Alistair Lindsay in his Golf, but Saxon stablemate Johnathan Barrett over-fulfilled his mid-season hope, his second place in the points-paying places handing him the Class 7 title. Ivor Mairs picked up the third-place points in the Paul Sheard Mazda MX5, while the Team BRIT BMW 116s had their party spoilt by an interloper; the #67 car of Matty Street/Andrew Tucker led the group, but, by dint of incurring a penalty due to a pit stop infringement, the Honda Civic of Steve and Edward Cook was racing amongst them, leading home lone driver Luke Pound, and the Nerys Pearce / Aaron Morgan #69 car.