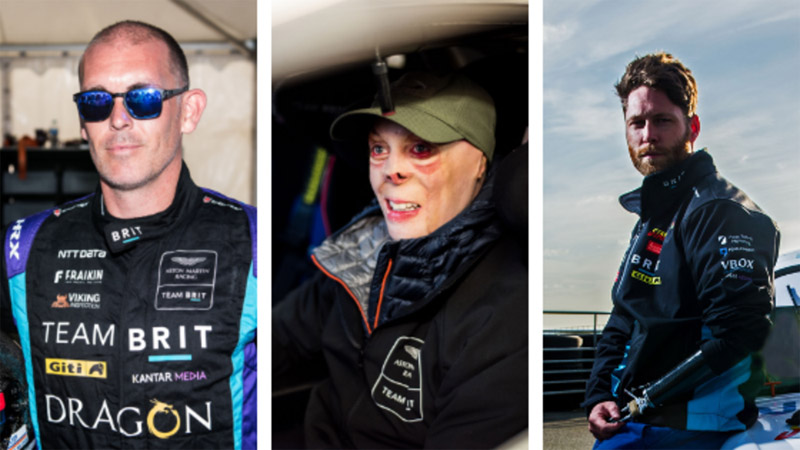 Team BRIT is announcing its driver line up ahead of its first race of the season in the Britcar Championship. The team has entered the iconic series, competing in an Aston Martin V8 Vantage GT4, with the championship kicking off on the 30th March at Silverstone.

Confirmed to drive for the team are military veterans Warren McKinlay, Martyn Compton and Jon-Allan Butterworth. Warren and Martyn are the most experienced drivers in the team, both starting their driving careers through KartForce, Team BRIT’s linked charity.

Warren is from Braintree in Essex and is a former member of the Royal Electrical and Mechanical Engineers. Warren was involved in a motorbike accident in May 2005 which left him with a broken back, pelvis and traumatic brain injury. He was diagnosed with Cotard’s Syndrome also known as ‘walking corpse syndrome’, as Warren believed he had died and was living in purgatory. He began racing with KartForce, and has been part of Team BRIT since its launch in 2015. Last year Warren competed in the Fun Cup but also raced the Aston Martin in the Aston Martin Le Mans Festival on the La Sarthe Circuit, held just prior to the annual endurance race, finishing 9th out of 24 teams.

Martyn Compton, from Battle in East Sussex, was part of Team BRIT’s original driver line up in 2015 which competed in Britcar. A former member of the Household Cavalry, he went on his first tour of Afghanistan in June 2006, when the patrol of tanks he was in was ambushed. His vehicle was blown up and he was shot at with rocket propelled grenades which blew the engine up and engulfed him in flames. He managed to crawl out whilst on fire but was shot twice. He suffered 3rd degree burns to 75% of his body and has undergone over 500 hours of operations and years of rehabilitation. After driving with Team BRIT in its early days, he returned to the team in 2018.

33-year-old Jon-Allan Butterworth MBE from Manchester joined the RAF in 2002 and served as a SAC(T) Weapons Technician. On 4 August 2007 he was involved in a rocket attack on Basra Air Station, Iraq. He was operated on by doctors in a battlefield hospital who carried out an above the elbow amputation of his left arm. He joined the Para-cycling Development Programme in 2009 and holds a number of track world records, including his recent victory in the HSBC National Track Championships in January 2019. He joined Team BRIT in April 2018, racing in the Fun Cup Championship.

Team BRIT Founder and CEO Dave Player said, "The guys are focused and ready ahead of their first Britcar race. Each of them has come a really long way in their driver development and confidence and we’re going to do all we can to offer some serious competition out on track.

"Britcar is the UK’s premier endurance series and the perfect next step for us as move towards our Le Mans goal."