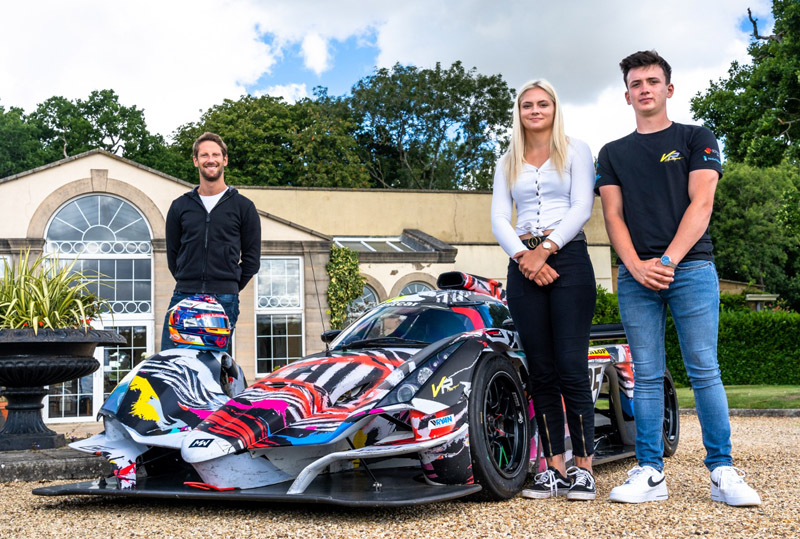 Teenage Praga R1T Evo drivers, Danny Harrison and Jem Hepworth, are featured in conversation with Haas F1 driver Romain Grosjean in a series of new films released by Praga prior to this weekend’s Britcar Endurance Silverstone round.

The dynamic duo, fresh from a devastating double-race winning performance at the 2020 Britcar Brands Hatch race weekend, had the privilege of meeting F1 star and Praga ambassador Grosjean during the 2020 British Grand Prix programme at Silverstone. The three racers discussed their origins in karting, the challenges and benefits of racing aerodynamic cars such as the R1, and tips to take on the UK’s legendary Formula 1 circuit.

The 6th and 7th races of the shortened Britcar Endurance season at Silverstone take place on Saturday 10th October. Harrison and Hepworth currently lie a close 2nd in Class 1 of the championship just 13 points behind fellow Praga drivers Jack Fabby and Garry Townsend, with all four looking to battle for the overall championship; the Pragas having won four of the five Britcar races this season, with the final round on 31st October at Snetterton.

Romain Grosjean said: "I really enjoyed meeting Danny and Jem. They are clearly very focused, talented and intelligent, so I am not surprised they have handled well the challenging move into an aero car like the R1. It was great chatting to them about their route into racing, and reminded me of the great days when I was on that journey. I’ll keep an eye on their results and wish them all the best in the future careers. We all seem to have an eye on Le Mans, so maybe we’ll be on the grid together there one day."

Danny Harrison said: "It was an incredible experience meeting Romain; he is such a genuinely nice person! Driving the Praga fast requires synergy, being at one with the car, which Romain described was also extremely important in a Formula 1 car. We shared common interests of being part of a team and getting the most out of both car and driver in the desire to win. Having won three of the four Praga wins in Britcar with Jem, I really want the Britcar title and, after having a chat with Romain and taking on board some of his top tips, it has really given me that extra push ready to take that top step at Silverstone!"

Jem Hepworth said: "I absolutely loved chatting with Romain as he shared stories of racing at Le Mans which is really inspiring as Le Mans is a major career goal for me. The most memorable part of our chat was when he answered my question about whether he had raced alongside any women, his face lit up as he spoke about racing a childhood friend and he was knowledgeable of other women racing drivers’ successes. He spoke about them with genuine admiration, respect and gave the impression of ‘racing is racing’ male or female which is encouraging to hear from a Formula One hero!"

Mark Harrison, Praga Cars UK Managing Director, said: "Given the pressures of Formula 1, and the additional restrictions currently imposed on racing, it was really kind of Romain to take time out to meet Jem and Danny. Not many young drivers in the UK will get the opportunity to sit and chat with one of the most famous F1 stars of their generation. I am sure they will remember the day for the rest of their careers and hopefully they will take a few tips and some inspiration that will see them succeed in this season’s Britcar and future racing."

Praga Cars UK Managing Director recently confirmed that a dedicated Praga category for the 2021 Britcar Endurance championship had been agreed with Britcar owner Claire Hedley, to be managed by Praga’s UK motorsport partner, VR Motorsport. A UK headquarters will soon be announced and a new R1 has also been confirmed that will take to the grid in 2021 with numerous upgrades. The all-carbon car, that has dominated the 2020 Britcar season to-date with four wins from five races, will feature upgrades to make it even safer, more adaptable, and with improved ownership benefits.