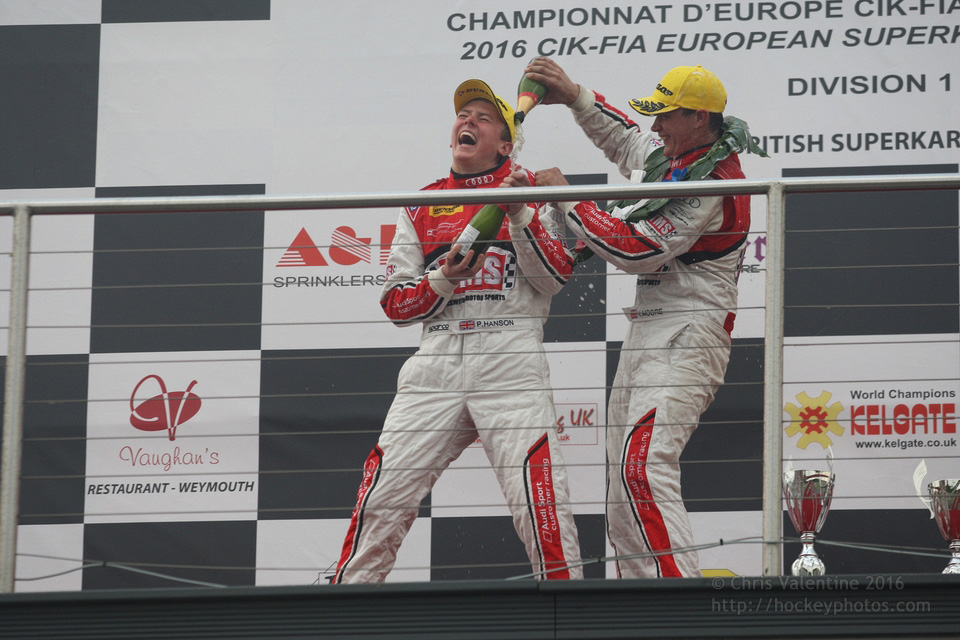 To be honest, barring a mechanical issue, this was never really in doubt; in terms of driver consistency and power, the Tockwith Motorsports Audi R8 LMS of Nigel Moore and 16-year old karting graduate Phil Hanson was a fair bet, though it wasn’t all plain sailing, as the Audi developed a thirst for Sunoco fuel that was under-estimated by the team, necessitating an irritating final pit stop.

The short early-morning free practice session was blighted by an oily track, with many electing to post a few cursory laps, though less cautious were the Audi crew, posting a 1:32.098 as the session came to an end, four seconds ahead of the Ing Sport BMW Z4. More was to come though, and in the lunchtime 30-minute qualifying session, it was the Audi all the way, confirming pole at 1:29.185 on the very last lap as the flag fell. Calum Lockie, though, was taking no prisoners; the FF Corse Ferrari 458 he shares with David Mason was chomping away at the pole time throughout the session, but never quite made it, ending up just shy of half a second adrift, though over three seconds ahead of a less-than-satisfied Nick Holden and Andrew McKenna in their Renault RS-01. FF Corse stablemates headed Class 2, with Leyton Clarke returning to a UK track after six years of Antipodean V8 racing to bag class pole in the Ferrari 458 Challenge shared with Simon Atkinson, ahead of the similar machine of father-and-son duo Mike and Anthony Wilds.

Class 3 is probably the most competitive in the championship at this point, and the Century and Whitebridge teams resumed the rivalry evident in previous rounds, with the Ginetta G55 of Jacob Mathiassen and Steve Fresle heading the Chris Murphy/Jody Fannin Aston Martin Vantage by just over a tenth of a second. The BMW M3 of Mike Moss, Tom Howard and guest driver Darren Nelson claimed Class 4 pole, and in Class 5, it was the Synchro Honda Civic of Alyn James/Dan Wheeler than bagged the best grid slot. Atypically out of place were Fabio Randaccio/Nick Randall, who’s Lotus Europa continued its litany of minor niggles, an alternator issue followed by an oil leak stymieing them this time, and the Glen Finn/Richard Burrows Ginetta G50, needing a new diff, and enduring brake pad issues. Sadly not making it into the race was the Porsche Boxster of Toronto ocular surgeon Fareed Ali and Britcar’s very own Chris Valentine; a mercy dash by the Newbridge team to collect and fit a new radiator was followed by an oil breather fracture when Ali attempted to qualify out-of-session, and their day came to a smoky and smelly end.

If the #1 FF Corse Ferrari had a chance in this race, Lockie needed a good start and be off like a robber’s dog ahead of the pack, and, indeed he made some headway in the blast up to Redgate as the red lights went out, jinking to cover his line as they braked for the corner, but Moore sneaked the Audi down the inside, and pulled into a lead through Hollywood and down the Craner Curves. It wasn’t a lead that Lockie was keen to let him have though – a gap of around six seconds was reduced by half once the pair got into a rhythm, but Moore responded, trading fastest laps with Lockie, to consolidate his lead.

There were mixed fortunes further down the field – Ian Lawson pitted the Ing Sport BMW Z4 on lap 4 with a gearbox issue, and was despatched back out on track five laps later, while Jacob Mathiassen had started the Century Motorsport Ginetta G55, and was now harrying old adversary Jody Fannin for the Class 3 lead, while just behind them Fabio Randaccio’s Lotus and Jono Brown’s Chevron were disputing the final class podium spot. Both of these cars would have issues pretty soon though – a slipping clutch in the Chevron caused an early pit stop and the diagnosis that it was problem that would just have to be endured, while the Lotus would be pitting regularly with a fuel pump issue; “The pump in one of the tanks has failed, and we have the fuel but can’t get it- our only solution is to fill the tank with the good pump the old-fashioned way by churns in the garage; we’ll have to ask the officials if we can do that” explained Fabio Randaccio.

A really slow lap by Lockie was cause for concern, around 50 seconds being lost, then again next time round, the red Ferrari visibly slowing on the rise through Schwantz up to McLeans before re-booting on the straight through to Coppice, and with barely 40 minutes on the clock, Lockie was in for a somewhat earlier stop than expected, handing over to David Mason, who encountered the same problem on his out lap, bringing the car straight back into the garage. “It keeps cutting into limp-home mode, it happened three times” rued Lockie.

The top four, minus the #1 Ferrari, had stabilised, with Moore now a long way down the road, and Leighton Clarke’s Class 2 Ferrari ahead of Anthony Wild’s similar car, and Nick Holden’s Renault, with the battling Fannin and Mathiassen next up, and disputing Class 3 honours. This was about to shake up though; with 50 minutes of the race gone, the gas guzzlers began to pit, and it was the leader first up, with Phil Hanson jumping aboard the Audi after refuelling. Leyton Clarke was next, just one lap later, so never really claiming the lead in the dark blue Ferrari. Simon Atkinson took over, and once the FF Corse pit apron was cleared and re-set, Anthony Wilds, who had inherited the lead for a couple of laps, was in, giving the yellow Ferrari over to dad Mike.

So, as the first hour ticked over, Nick Holden’s Renault RS-01 led, with an economy forced by lack of pace due to a malfunctioning transmission. He would pit after 75 minutes running, just as the Safety Car was deployed, meaning that only 25 litres of Sunoco could be dispensed before Andrew McKenna took over. The Safety Car was deployed after a lap or so of pontification, as David Mason’s Ferrari, which had just returned to the race, had come to a halt on the GP loop towards the Melbourne Hairpin. This caused a flurry of bonus refuelling stops for the heavy hitters, with the Audi and both remaining FF Corse Ferraris exploiting the situation, and the Renault diving in again to replenish, with Nick Holden admitting he was caught out by the indecisiveness of the Safety Car release; “We thought it wasn’t going out, that’s why we pitted when we did” he told celebrity guest pitlane commentator Rob Hedley, who would later reveal in an unaware open-mic situation that he was dying for a pee! Strangely, the Class 5-leading Synchro Honda stopped at this point too, but Dan Wheeler stayed in the car whilst the drink bottle was exchanged, and after Alyn James did some fumbling with a lap-top on the roof of the vehicle, it was despatched back on track. It would pit for real just a short while later for James to take over.

So, once the Safety Car had let the pack go again, Phil Hanson’s Audi led McKenna’s struggling Renault by the best part of a minute, but as the clock ticked into the final hour, it was the FF Corse Ferraris that held the podium places, with Simon Atkinson half a minute adrift of the Audi, and Mike Wilds a further lap down.

Aside from the scheduled pit stops, there we a number of irregular in-and-outs going on. The Porscheshop 997 made several visits, the Hoffmans of Henley Lotus Europa continued its run of maladies, and the Glen Finn/Richard Burrows Ginetta G50 began a series of woes in the second half of the race, an overheating diff necessitating the un-attractive removal of vast amounts of ducting.

The battle for Class 3 honours had turned tables – Stephen Fresle now led in the Century Ginetta G55, running around a second-and-a-half quicker a lap than Chris Murphy’s Aston Martin Vantage.

What was expected to be the final pit-stop for the front runners took place as the final 45 minutes crept up, and the Class 1 and 2 cars now had their fastest drivers back behind the wheel; Moore in the Audi, Leyton Clarke and Anthony Wilds in the Ferraris, and Nick Holden in the Renault, sounding rough as the engine hit the limiter whilst snapping from third to fifth gear. Moore now showboated his final stint trademark – a succession of fastest laps to stamp his authority before cruising to the flag, but this took its toll on the Audi’s economy, and a final splash of fuel was administered just before the final 15 minutes cut in. Clarke pitted the #44 Ferrari too, with just three minutes of the race left, obviously now running on fumes, and Anthony Wilds came in behind, causing a log-jam on the FF Corse pit apron; but this wasn’t for fuel – Mike Wilds jumped aboard for what would be one final racing lap, and Anthony Wilds explained; “it was the 40% minimum driving time, dad was two minutes short”.

It was a very convincing win after a tidy 110 laps for the Tockwith Audi, Phil Hanson’s solid middle stint earning the talented teenager the Sunoco Driver of the Day award, while Leyton Clarke’s Class 2 victory with Simon Atkinson in the #44 Ferrari marked a successful return to UK Racing after six years away racing in Australia and New Zealand. The Wild’s Ferrari was a safe third overall, ahead of Class 1 runner-up, the Holden/McKenna Renault. “We had a new gear cluster, but that broke. We got mugged at the start with gearbox problems, and the car was so frustrating to drive” said a disappointed Nick Holden.

Completing the Class 1 podium was the Ing Sport BMW Z4 of Ian Lawson, Kevin Clarke and Ryan Lyndsay. Lawson started the race from the pit lane, and then pitted early during his opening stint with a gearbox issue, losing five laps, but the car ran faultlessly thereafter, the lap times identifying that this could have managed a top three overall finish, and the bottom step of Class 2 was taken by Darelle Wilson and Ian Heward, the Midlanders still trying to get the best out of their special Porsche 911RSR; “It ran well, we just need to get more power” rued Wilson.

The Class 3 lead battle between young chargers Jody Fannin and Jacob Mathiassen was the highlight of the first hour, but was broken-up by pit stops and the Safety Car period. Stephen Fresle’s Ginetta had the legs of quad bike champion Chris Murphy’s Aston Martin in the middle section of the race, despite a grassy moment, consolidating the Century Ginetta’s second class win of the season, the rivals finishing a lap apart; “Jody wore the tyres out battling with Jacob in the first stint” joked Chris Murphy. Third in class, after struggling with a race-long clutch issue in the Tracktorque Chevron, were Mini Challenge regular Jono Brown and Fun Cup exponent Graham Roberts.

Class 4 winners Moss Motorsport endured multiple tyre issues on the BMW M3 on the way to their victory; Tom Howard pitted very early for a rear change, and while Mike Moss’s middle stint was seemingly uneventful, guest driver Darren Nelson suffered a front puncture in the final 15 minutes of the race. Runners-up Glenn Finn and Richard Burrows had their own problems too in the newly-acquired Ginetta G50; “It’s good to get to the end. We now need to spend a bit of money, build up more spares” said Finn, boss of the small but serious team.

The fast sweeps and unforgiving abrasive surface of Thruxton are the next stop on the calendar – an exercise in power, bravery and tyre management.