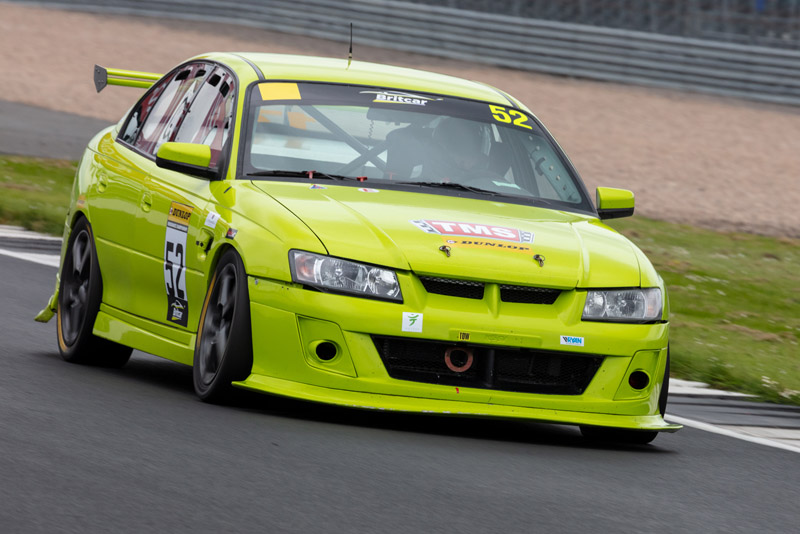 Tockwith Motorsport’s Lucas Nannetti enjoyed back-to-back podium finishes at Silverstone, as he and team-mate, Rob Baker, battled changing conditions during the second-round of the Britcar Dunlop Endurance Championship. The pair competed in a Holden Chevrolet V8 after TMS elected to swap cars before the sprint races, and, considering Lucas, 16, had never driven a left-hand car, he adapted quickly and his lap times improved throughout the practice session to be competitive with his and Rob’s class rivals.

After qualifying, Lucas was optimistic for a good race and was thrilled to be racing at one of the most historic race circuits in the world: "I am delighted to be driving the Holden, especially at my favourite track, Silverstone. I love the sweeping curves and fast straights, which gives the track a great flow. I am very confident in both the car and our performance; the brakes and handling on the V8 are superb, which allow me to brake really late before hitting the throttle when coming out of the corners."

In race one, which stayed dry despite the threat of rain, Rob completed the first half of the race, working his way up into second-place in class. Thanks to the swift work from the TMS pit crew, Lucas was able to jump into the car and maintain position as he exited the pitlane. He demonstrated his smooth driving style, helped by the excellent handing and torque of the V8, by controlling the pace and maintaining his position, taking the chequered flag in second-position in class.

During race two, the team decided to stick to the same strategy as the previous sprint race: Rob raced off the line, starting from second-position in class; however, engineers needed to rethink the strategy, as torrential rain fell and resulted in a safety car being deployed.

TMS took full advantage and pitted Rob. Lucas jumped into the car while the team switched from dry to wet tyres and, crucially, exited the pit-lane on the same lap behind the safety car. Skilfully, Lucas guided the car safely across the line, finishing 10th overall and third in class for the sprint category – meaning two podium trophies from the weekend.

An overjoyed Lucas said: "I am thrilled to have two trophies from this weekend. I had high expectations for myself, so I am very pleased to have met my personal targets. I would like to say a huge thank you to both Rob Baker and TMS for all their hard work leading up to and throughout the weekend. I would also like to thank my sponsor, BBVR, for its continued support."