Trophy Race 1 Report: BMW vs Ginetta For The Overall Win 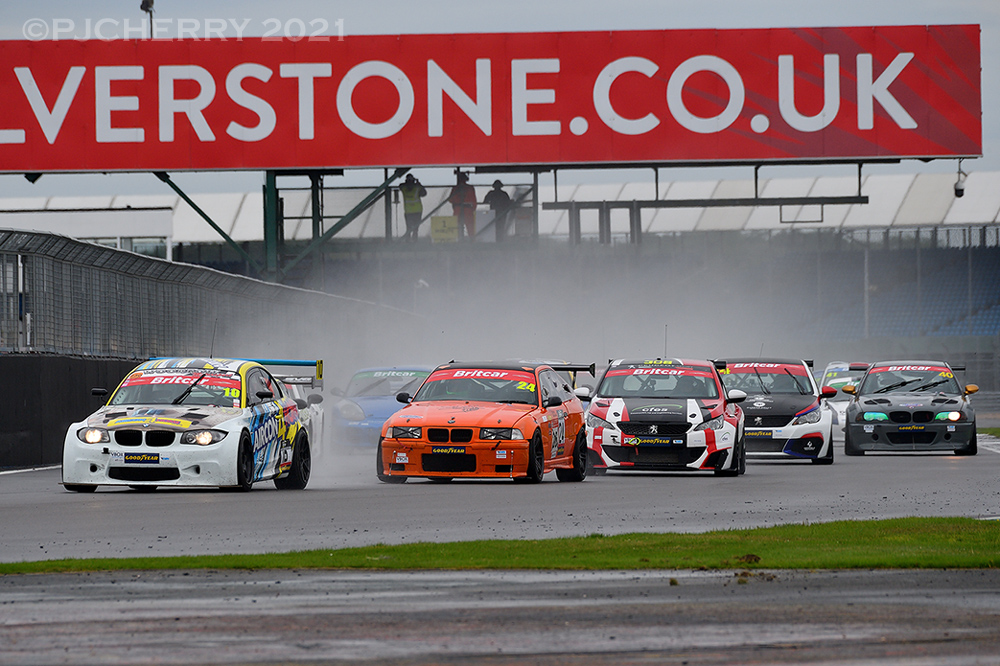 The overall win has always been about BMW and Ginetta this season, and this time, on Silverstone’s short, tight National configuration, it was the Woodrow BMW 1-series of Simon Baker and Kevin Clarke that took the win, half a lap ahead of the peripatetic Lucky Khera, who had borrowed an M3 from Bryan Bransom to race as an Invitation entry, with the two Ginetta G56As of Mark Lee and Axel Van Nederveen in third and fourth places.

The conditions were damp enough for most runners to elect to start on the wet version of the Direzza tyre, and it was Simon Baker who led away at the rolling start, and by the end of the short first lap, he held a lead of nearly three seconds over Steve Rothery’s Peugeot 308, Lucky Khera’s BMW M3 and Mark Lee’s Ginetta, while sadly retiring after just one lap was the MacG Racing Mazda RX8 of Jonny McGregor.

Khera slipped back, with Lee now pestering Rothery for second place, bringing Van Nederveen with him, and Andy Tucker was making ground in the Team BRIT BM240i, as was Dave May in the Jamsport Nissan 350Z. The early stages of the race saw skirmishes and overtaking throughout the mid-field – "just too much going on to mention" said commentator Ian Titchmarsh – but Paul Plant’s Alfa Giulietta led Class 3, while Aaron Thompson had wrested the Clio class lead from Brad Thurston, and was moving up the overall order. By now, Lee and Van Nederveen had passed Rothery, and rapidly gained on leader Baker, the BMW and the two Ginettas lapping with barely over a second covering the three of them, and by lap 18, Van Nederveen had seen enough, taking Lee, then seizing the lead from Baker two laps later. 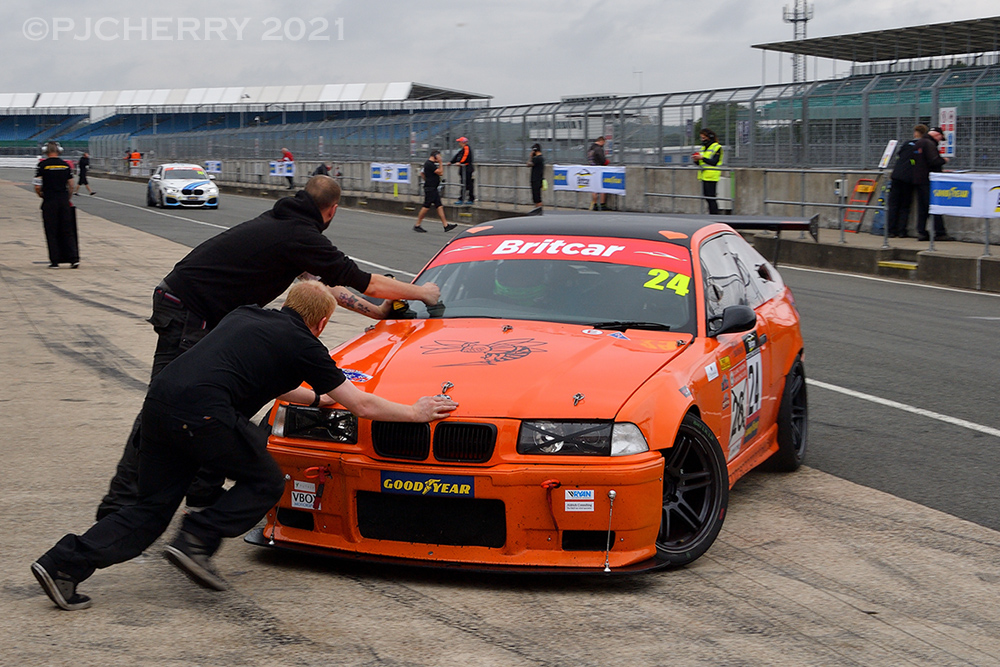 Terry Stephens’ Peugeot 308 ended its race in the gravel – "I put my foot down too much" he rued – and Darren Geeraerts put his retirement in his damaged Clio down to exuberant interpretation of his coaching instructions. Baker’s pace had slowed a little, and once the pit window opened, he was one of the first to take the opportunity to come in, handing over to Kevin Clarke, and stating "That was really intense, it was good to see the pit window opening, the wets were going off for those last few laps". Staying out, though, were the two leading Ginettas, Van Nederveen now encountering slightly less traffic which enabled him to add to his series of fastest laps, and Lee attracting the attention of the men in serious trousers, who awarded him a five-second penalty for exceeding track limits.

A two-minute pit stop is the best part of two laps on the Silverstone National configuration, and some may have been stymied by changing tyres on five-stud fixings, and once the field settled again, Kevin Clarke led in the Woodrow BMW 1 series, with Lucky Khera back in contention in the borrowed orange M3. Clarke upped the ante to consolidate his lead, punching in a couple of 1:01 laps when traffic allowed, and as the race drew to a close, found himself between the Ginettas of Lee and Van Nederveen, who were disputing the final podium spot a lap down on the leader. With Khera now not likely to be a threat, Clarke hung back from lapping Lee, but this did no favours for the Dutch finance guru in the white Ginetta, who now faced difficulty in mounting a challenge to Lee. When the flag fell, Clarke took the win, nearly 40 seconds ahead of Lucky Khera, but Lee, just ahead of the winner on the road, had to do another lap to take the flag, while for Van Nederveen, by dint of being just behind Clarke on the road, so a lap down, his race was now run, being placed fourth overall. "I knew Mark would be hard to pass, so I held back, asking the team to let me know if Lucky was getting close, then I’d do something about it" said Kevin after the race.

Behind the top four Class 1 runners, Jas Sapra moved up the order in his BMW M3 started by Bryan Bransom, and Steve Rothery was next up in the Peugeot 308, while an impressive opening stint by Andy Tucker in the Team BRIT BMW 240i was thwarted by technical issues, not allowing experienced GT pro-driver James Birch to show his mettle later in the race. 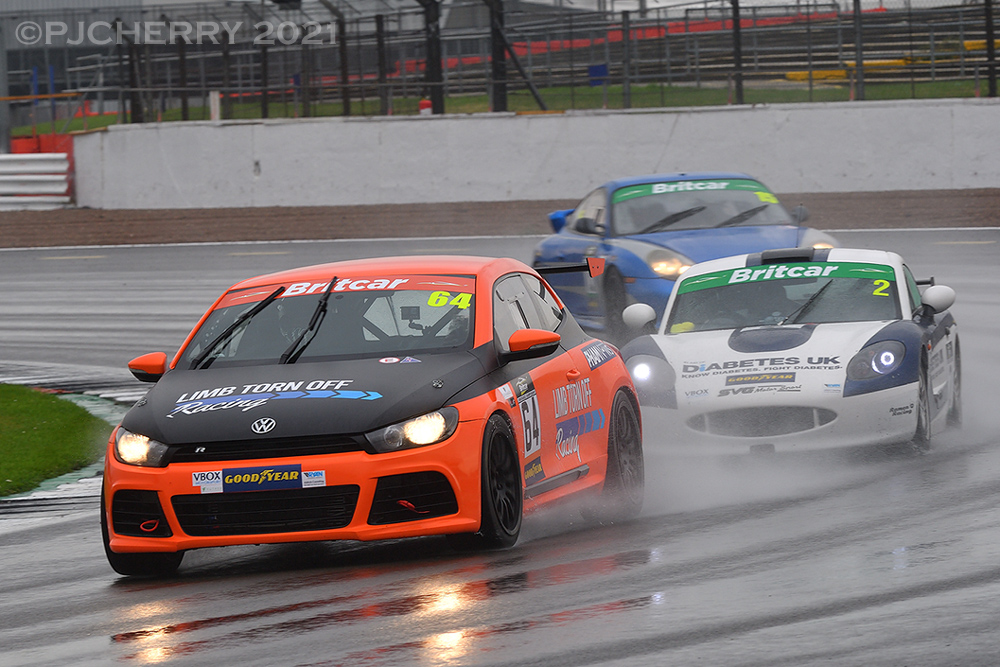 Class 2 went to the Ramen Racing Ginetta G40 of Peter Spano and Andrew Bentley; they had always been in the hunt, and the timesheet showed a 0.032 second gap to the Jamsport Nissan 350Z of Dave May and Mark Skeets, though a five-second penalty for the Nissan reveals the true extent of the gap, while the Invitation entry VW Golf of VW Cup refugee Ollie Turner took third in class, the points went to regular contender Richard Higgins in the County Classics Porsche 996, who finished ahead of the endurance-spec Renault Clio of Ryan Firth and Andy Mollison, impressive as always but foiled by an electrical glitch. The last Class 2 runner was Paul Goodlad, the amputee having his first-ever race in a JW Bird-run VW Scirocco converted to hand controls; he impressively recovered from an early-race spin and acquitted himself well in the tricky conditions.

Class 3 victor Arthur McMahon achieved the win in his Honda Civic despite accruing 15-seconds worth of penalties for track limit infringements, beating brother Barry’s Alfa Giulietta, which was started by Paul Plant, with third place going to the Golf of Mark Jones and long-time racer Robert Taylor, who incidentally can boast the title of Tropical Endurance Class Champion 2009, a Florida-based US series. They finished just 0.691 of their TSR team mates, newcomer Fynn Jones and the ebullient Tony Rodgers in a similar machine, Rodgers putting in some fast laps In his stint and being labelled as one to watch by the Class 3 contingent. Next up was the Team BRIT BMW 118 of Luke Pound and relative novice Christiean Dart, ahead of previous front-runners Steve Griffiths and Jamie Vinnall-Meyer getting to grips with revised power/weight ratios in the Reflex Racing Ginetta G20. Charlotte Birch enjoyed some close racing in the early stages, but finished seventh in class in her Vinna Sport Ginetta G40, with the Invitation entry Golf of Simon McCormick/Kerie O’Donnell next, heading the Honda Civic of Edward and Steve Cook.

Despite attracting their usual penalty, Aaron and Steve Thompson took the Clio victory, ahead of lone-driver James Black, who as always moved up the order as the race progressed, with the Motus One example of Brad Thurston and Matt Cherrington third.