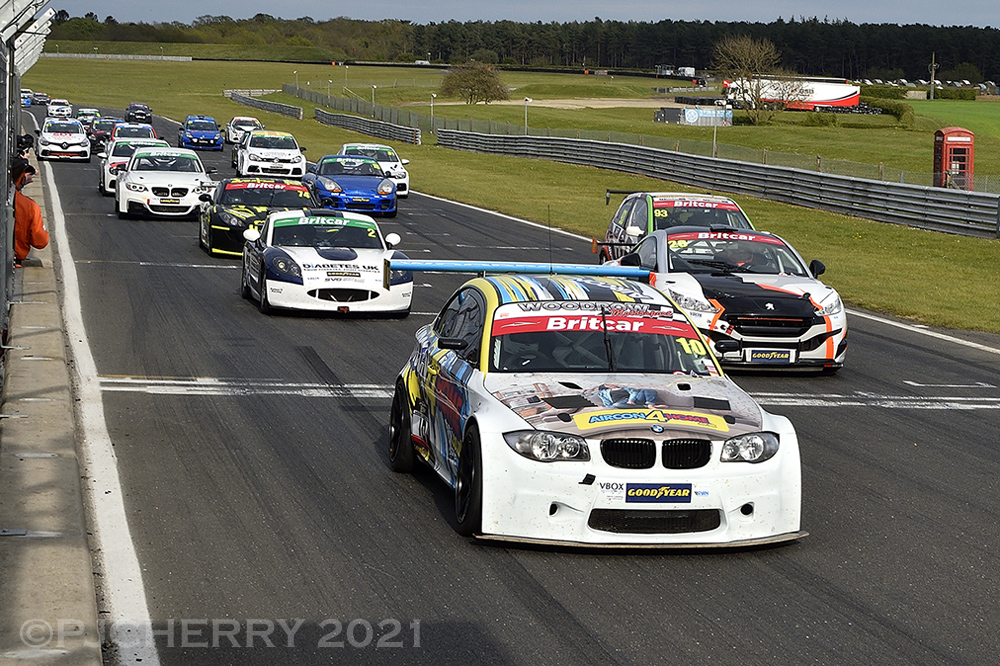 It was Simon Baker and Ollie Reuben again taking the win in the Woodrow Motorsport BMW 1M in Race 2 at Snetterton, and this time it was an even closer finish, with Mark Lee’s Ginetta G56A poised to snatch victory.

With Jas Sapra’s BMW missing from the front row of the grid, Rob Smith made the most of the gap ahead of him at the rolling start, though Kester Cook slotted his Fiesta ahead of the Peugeot into the first corner, while Ollie Reuben’s BMW got away into the lead. Cook and Smith traded places all round the opening lap, with Lee’s Ginetta latching on to the back of the squabble, and Matty Street? Well – 19 places made up on that first lap in the Team BRIT BMW!

James Colburn and Aaron Thompson resumed their skirmish for Clio honours, and Luke Pound nosed his BMW 118 into a Class 2 battle between Del Holden’s Ginetta and Richard Bernard’s Boxster. Lee passed the Kester Fiesta, in which Cook was managing his brake issues, and was soon challenging Smith’s Peugeot for second place. It took the best part of 15 minutes for the Ginetta to pass the Peugeot, by which time the pit window had opened for the Class 2 runners – and then the Peugeot got the place back.
Ivor Mairs recovered from a spin in his Mazda, though a tangle at Nelson between Anthony Hutchins’ Boxster and the Scirocco of Paul Dehadray saw both sidelined, which wasn’t good news for the Amigo and JW Bird teams, with Richard Bernard’s Boxster and Tony Prendergast’s Scirocco already having retired.

Matty Street, after his storming start in the Team BRIT BMW 240i, had been unable to break into the front-running group, but by dint of leaving his pit stop to seconds before the latch came down on the window, inherited the lead.

Once the field settled after all stops had been taken, Simon Baker, now in the Woodrow BMW 1M, was a quarter of a minute ahead of lone-driver Lee in the Ginetta, and after a few laps at full chat, seemingly eased off, giving Lee a sniff of victory as he upped his pace to respond. Taking out around four seconds a lap, the pair came round Coram for the final time nose to tail, and the Ginetta cleanly took the tight inside line at Murrays just sneaking ahead, but Baker laid the power down on the run to the flag, and the BMW beat the Ginetta by just 0.341 seconds, one of Britcar’s closest finishes. In the post-race interviews Simon Baker confessed "I was taking it easy, I didn’t realise, then I looked in my mirror…", while Mark Lee’s thoughts were, "OK, let’s see what we can do". 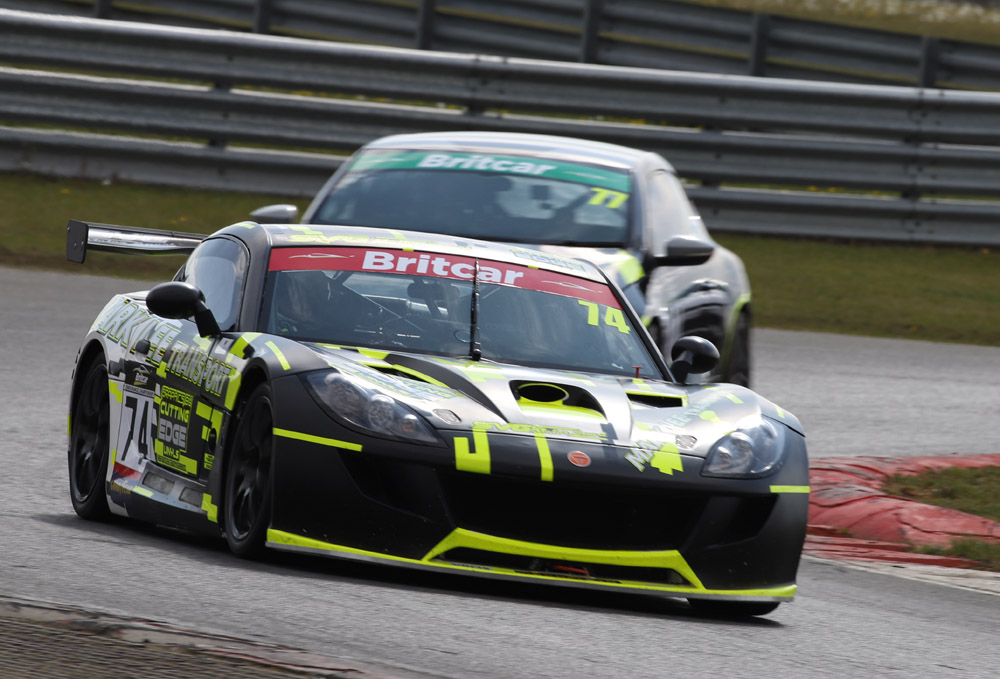 Close – but no cigar for Mark Lee’s Ginetta

Kester Cook was a fine third, despite having to manage concerns in his Fiesta, "no brakes all day, foot to the floor, no dash info…" being just a few of his litany of issues. Charlie Campbell was fourth in his Peugeot started by Rob Smith, a tangle with the Woodard Mini delaying him in the closing stages, and Andy Tucker brought the Team BRIT BMW 240i home fifth in Class 1. Class 2 went to Richard Evans in the white BMW 240i, just five seconds ahead of Richard Higgins’ Porsche, these two posting fairly equal lap times, with third taken by the Ramen Racing Ginetta G40, in which amateur driver Peter Spano held steady in his opening stint, letting pro-driver Andrew Bentley loose towards the end, bagging the fastest lap in the class. Steven Chandler and Joel Wren finished just off the podium in their Golf, and it was a really close finish for fifth, with the Boxster of Andrew Porter stealing the place from Andy Mollison’s Clio on the penultimate lap, just half a second separating them at the flag (Ryan Firth had actually challenged Richard Evans’ BMW for the class lead in his opening stint in the Clio). Matt Evans was the top JW Bird Scirocco this time, and the Woodard family had an improved result in the their Mini, eighth in class, while there wee the usual solid performances from Leigh Smart/Kevin Hancock in the Jemco Boxster, and Stuart Gibbons/Del Holden in the Reflex Ginetta GT5.

Steve Griffiths and Jamie Vinall-Meyer continued their run of Class 3 wins in the Reflex Ginetta G20, with, as Race 1, the Honda Civic of Steve and Edward Cook, and Derek McMahon Racing stablemate Barry McMahon in his Alfa Giulietta completing the class podium. Luke Pound had another fine solo drive in the Team BRIT BMW 118, finishing fourth ahead of Ivor Mairs’ Mazda MX5, while the Jones/Taylor Golf sadly posted an early retirement.

Race returnee Sarah Franklin maintained the lead achieved by James Colburn in the Clio class, but the win was taken again by Steve and Aaron Thompson, with the newly oil-capped Anton Spires/Darren Geerearts Gen 4 ahead of the Gen 3 version of Richard Colburn and James Black.