Trophy Race 2 Report: Baker and Clarke Win, and a Penalty Shoot-Out For Positions 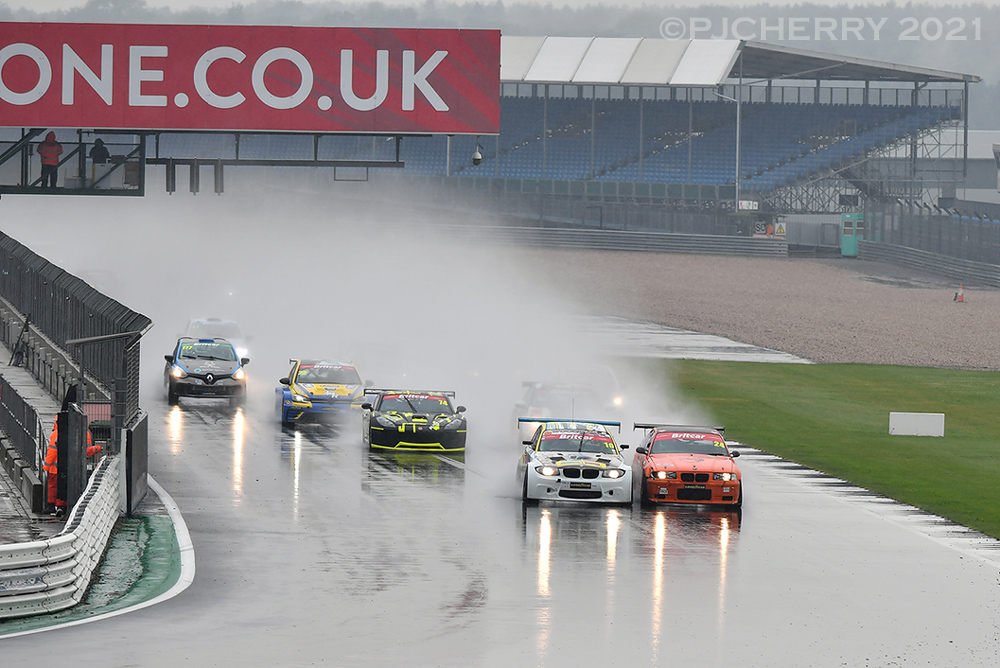 Rain of biblical proportions had caused a long gap in mid-afternoon racing, so the Trophy contingent took to the track in slightly improved, but still soaking conditions, for a race that was truncated to just 35 minutes, to beat the 6pm curfew, and it was once again the Baker/Clarke BMW 1-series that took the win. With some runners missing – the Ginetta G56A of Axel Van Nederveen, and the G40 of Charlotte Birch (which had electrical issues), and some pitting after the pace lap with misted screens, Kevin Clarke, starting the 1-series, and Lucky Khera in his borrowed M3, led the pack away in a swirl of spray. For three laps, Clarke held just a tenuous lead, then Khera drew alongside coming out of Luffield, and they were together, with just a respectful gnat’s whisker between their door mirrors, through Woodcote and along the whole length of the pit straight, with Khera just nosing ahead as they went through Copse (giving certain F1 drivers a masterclass on how it can be done). Behind them, Mark Lees was cautious in the Ginetta G56A, dropping behind the Peugeots of Steve Rothery and Terry Stephens, while Ollie Turner, in the Invitation entry Golf, was a sensational third, and an impressive Ryan Firth a seventh in the endurance-spec Clio.

Lucky’s luck ran out on lap 9 – holding just a lead of around half a second over Clarke, his first two sector times on that lap indicated he was making a move to get away, but the orange BMW careered into the gravel at Brooklands, beaching the car and calling for the intervention of the Safety Car. The recovery was a long process, and with a shortened race, it wasn’t long before the pit window opened, a little earlier in the race than usual, and most dived in on two successive laps, leaving stop-outs Stephens, Firth, Jamie Vinnall-Meyer’s Ginetta G20, Tony Rodgers’ Golf and Simon McCormick’s similar machine to head the field for a short spell. 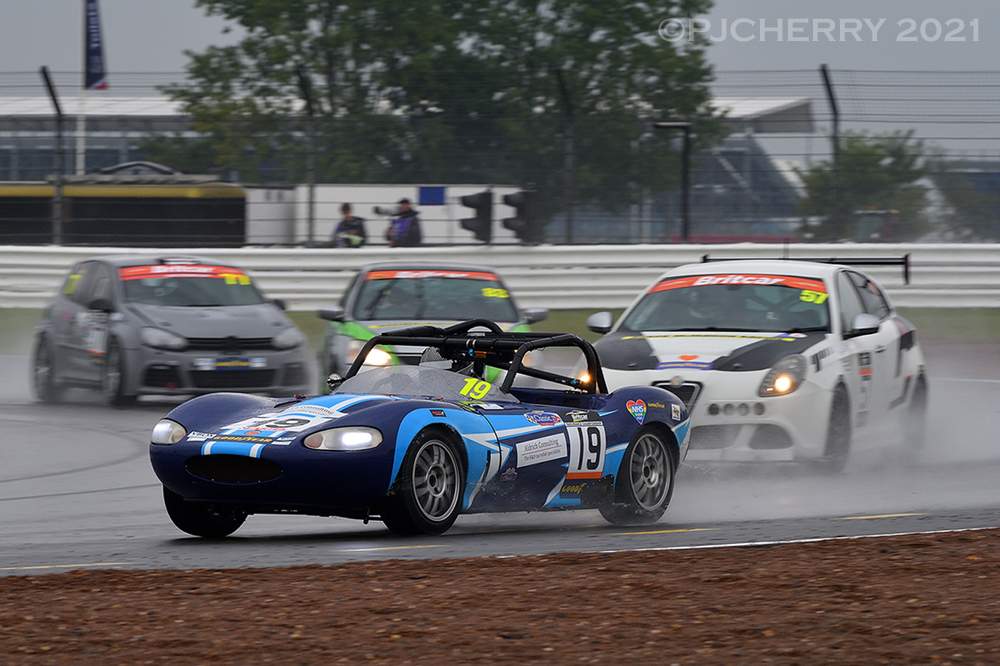 There were just nine minutes left to run once the caution was eventually lifted, and with no indication that the pit window had closed just yet, in was non-stopper Tony Rodgers in first place, followed by Andy Tucker, who had taken over the Team BRIT BMW240i from James Birch, Rothery’s Peugeot, the incredible Andrew Bentley, who had relieved Peter Spano in the Ramen Ginetta G40, Lee’s Ginetta, and Simon Baker, now in the Woodrow 1-series. It was a mixed-up, jumbled-up order, with Baker and Lee cutting through to the front, and once Rodgers pitted from the lead, to hand the Golf to Fynn Jones for a handful of laps, Baker came out in the lead, and took the win. On the road, Lee was second, and Andy Tucker third, the best result for Team BRIT so far, and justification for the hard working team for fitting parts that had been Ubered over from Heathrow during the break between races. It wasn’t to be though – the officials had issued drive-through penalties to six cars with just four minutes of the race left; some took them, some didn’t, but further post-race penalties were issued to five cars, altering the complexion of the result.

Terry Stephens was elevated to second place (he’d been fourth on the road in his Peugeot 308), and now third was Class 2 victor Richard Higgins in the County Classics Porsche 996, and fourth overall (with no penalties this time) were the jubilant father-and-son pairing of Steve and Aaron Thompson, also taking the Clio Class win, though only less than a second ahead of class-mate James Black, the youngster performing his usual late charge to the flag. Steve Rothery was placed sixth overall, completing the Class 1 podium, and just squeezing out the penalised Mark Lee, with the luckless Team BRIT BMW 240i of Andy Tucker and James Birch placed 10th overall, and the BMW M3 of Jas Sapra and Bryan Bransom never really recovering from a first-lap pit stop.

Class 2 runner-up was the Invitation entry Golf of Ollie Turner, while, despite technical issues again, the Preptech endurance spec-Clio of Ryan Firth and Andy Mollison took the second-place points, ahead of the Peter Spano/Andrew Bentley Ginetta G40, Paul Goodlad completing his debut weekend with an impressive performance in the Invitation-entry VW Scirocco, and the Nissan 350Z of Dave May and Mark Skeets, another who took a first-lap pit stop for screen-clearing. 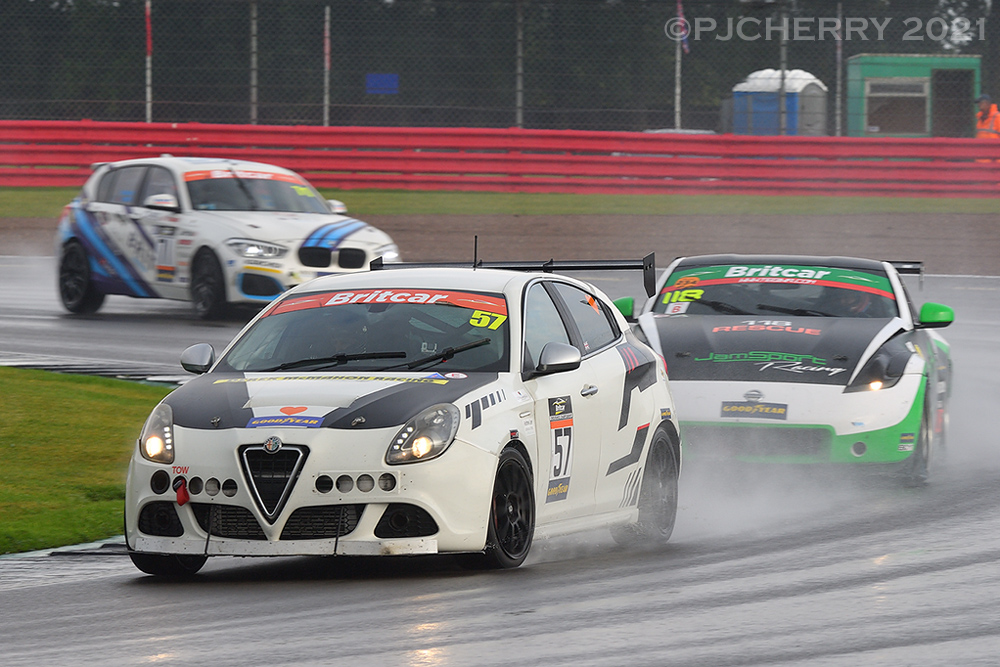 Class 3 saw success for the Alfa Giulia of Barry McMahon and Paul Plant, a sensational performance from the back of the grid, which earned Barry the Driver of the Day award, while stablemates Steve and Edward Cook had a much better race in the tricky conditions, bringing their Honda Civic home second, and, despite a heavy post-race penalty, third place went to the TSR Golf of Tony Rodgers and Fynn Jones, mainly by dint of the more experienced Rodgers playing the pit window to the maximum and capitalising on a long stint. Fynn’s dad, Mark Jones, shared another TSR Golf with veteran racer Robert Taylor, in fourth place, ahead of Arthur McMahon’s Civic, the Team BRIT BMW 118 of Luke Pound and Christaen Dart and the penalised – and with the front panel rearing up after accident damage – Ginetta G20 of Steve Griffiths and Jamie Vinall-Meyer, while the similarly-penalised Invitation-entry Golf of Simon McCormick and Kerie O’Donnell completed the class finishers.

Behind the close-fought battle for the Clio lead, the Motus One car of Brad Thurston and Matt Cherrington was third in the class, in front of lone-driver Darren Geeraerts, who showed no fear, lifting wheels in the soaking wet conditions.