Trophy Race 2 Report: The Winners Take It All – Again

OK, same overall and class winners as Race 1, but a different story for those behind. Simon Baker and Kevin Clarke took the spoils again, and this time it was Clarke taking the start in the Woodrow BMW 1-Series, with Lucky Khera’s E46 falling in behind, and Mark Lee’s Ginetta G56 third, these three pulling an early gap to Matty Street’s BMW M240i and Tony Prendergasts’s Scirocco, both of which were quickly deposed by the on-the-move Kester Cook in his Fiesta.

Rob Baker was an early pit visitor, retiring the Smart ForFour with overheating issues six laps in, and Richard Higgins was worrying the Class 1 cars in his Class 2 Porsche 996, trading places with Prendergast’s Scirocco and slipping in behind Andie Stokoe’s BMW. The leading three we fairly spread-out by the time the pit window opened – Clarke had a seven-second lead over Khera, with Lee a further 15 seconds back, and they let the majority of the field take the stops while they stayed out until the window was o the cusp of closing, leaving only lone-driver Higgins to inherit the lead for a few laps.

The Team BRIT M240i endured an extended pit stop before Andy Tucker replaced Matty Street, and there was an inordinate amount of brake smoke from the Khera BMW, which didn’t unduly worry the Simon Green team, sending Jas Sapra on his way. The top three remained the same as before the stops, with Simon Baker now in the leading Woodrow car, eking out a steady advantage over Sapra, with lone-driver Lee maintaining third in the Ginetta, and that’s how it stayed until the flag, with veteran racer Kevin Clarke, who more than often builds his own race cars, extoling the virtues of the race-winning BMW 1-Series.: "Woodrow have built a great car – I’ve driven a few cars in this Championship, and this the best car I’ve ever driven". 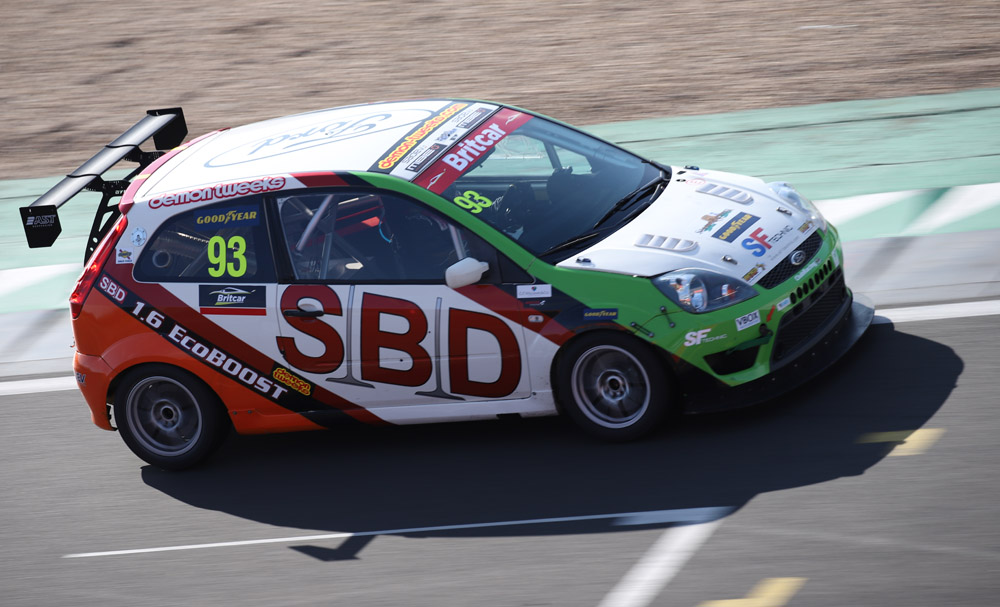 Kester Cook, in the rather special "Kester Fiesta", was a valiant fourth, with the Kan-Yan BMW of Andie Stokoe and David McDonald fifth, and Tony Prendergast was sixth on the road, but was awarded a penalty for a pit-stop infringement, dropping him down the order; he did, though, retain his Class 1 position, ahead of JW Bird team mates Kieran Griffin and Paul Dehadray in their Sciroccos, while that pit stop issue for the Team BRIT M240i dropped the Street/Tucker pairing out of contention.
In Class 2, the win went again to Richard Higgins after an impeccable drive in the County Classics Porsche 996, though this time, Andrew Bentley was closer in the Ramen Racing Ginetta G40 started by Peter Spano. Daniel Crossley, in his Scirocco, secured the final Class podium spot, ahead of the endurance-spec Clio of Andy Mollison/Ryan Firth, and in a close-packed midfield, the Ferrari 355 of Chris Goddard/Richard Dougal had just three seconds over the Ginetta G40 of lone-driving youngster Charlotte Birch at the flag. Daniel and Sean Woodard made progress in their Mini Challenge, and it was a better race for Richard Bernard in the Amigo Porsche Boxster after issues forced an early end to the first race, while the little BMW Z4 of Chris Murphy/Roland Hopkins was ninth, followed by the similar JC Racing machine of Oliver Smith and Clinton Ewen, who squandered a potential eighth place with a pit-stop penalty. Steven Chandler and Glenn Stokes had a steady run in the Golf, erstwhile front-runner Alastair Lindsay was getting to grips with his newly-acquired SEAT Leon, Stuart Gibbons and team boss Del Holden piloted the Reflex Racing Ginetta GT5 to 13th place, and the Jemco pairing of Leigh Smart and Kevin Hancock stopped after 35 minutes in their Boxster.

In Class 3 it was, again, the Reflex-run Ginetta G20 of Steve Griffiths and Jamie Vinall-Meyer on the top step of the podium, with the Golf of Mark Jones/Robert Taylor second and reigning class champions Steve and Edward Cook third in their Honda Civic. Luke Pound went it alone again in the Team BRIT BMW 118, finishing fourth, and Barry McMahon’s Alfa Giulietta is still a self-acknowledged development project, while the Mazda MX5 Invitation entry of Ivor Mairs was classified 30th after collecting a pit-stop time penalty.

It was a familiar story in the Clio class – Anton Spires made the early running in the Spires Motorsport Gen 4, ahead of Ben Colburn, but it was all down to the second stint, when James Colburn got past Darren Geerearts to claim the win. Westbourne team boss Richard Colburn shared the third place Gen 3 with junior graduate James Black, and Jay Morton/Miles Lacey took their Motus One/Praga-backed Gen 4 to fourth, while sadly father and son duo Steve and Aaron Thompson were forced to retire with an alternator belt failure.

This had been an exemplary race, no Safety Cars, and just three competitors out of the 35 starters not taking the flag.