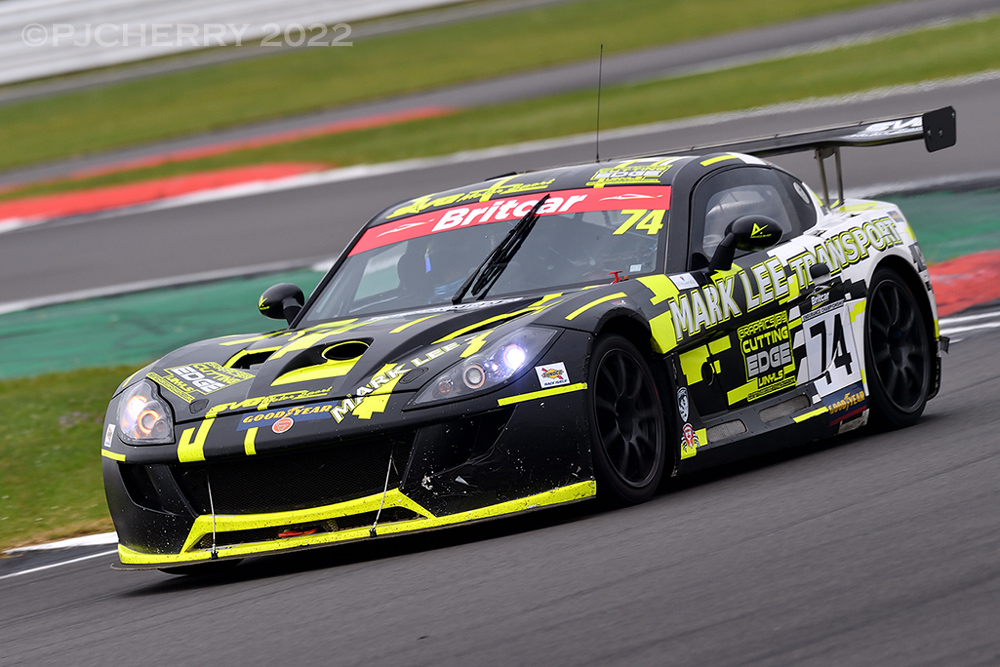 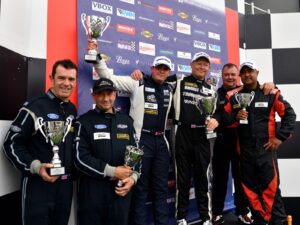 Mark Lee and Owen Hizzey took a fairly comfortable win in Race 2, their Ginetta G56 benefitting in some way through having a slightly less pit-stop success penalty than second-place Bryan Bransom and Jas Sapra’s BMW E46.

And those success penalties did alter the complexion of this race somewhat, as did an early, but short, Safety Car intervention.

Bransom led away from the rolling start, and at the end of the first lap had a three-second lead. Ian Astley was quick away too, and the Metamark-liveried Ginetta was soon past both the similar cars of Van Nederveen and Lee, into second place. Van Nederveen tried to cash-in on Astley’s move, but Lee was having none of it, and behind these David Gooding was fourth in the Geoff Steel-run BMW E36, opening up a gap back to James Whitley in Team BRIT’s BMW 240i , who had Josh Tomlinson in the MacG Mazda on his tail. A clash between the Clio of Richard Ashmole and Mark Warren’s G40 brought out the Safety Car for just three laps, and once the caution was lifted, the top four resumed line astern, and Whitley got the jump on Gooding at the restart,  and Van Nederveen had a spin which put him down the order.

The heavy-hitters pitted within a few laps of each other when the window opened, and this is where the success penalties came into play. Ian Astley’s stunning opening stint put the #24 Ginetta in a good track position, and Neil Wallace took over, coming out in the virtual lead, with SVG stablemate Owen Hizzey, now in Mark Lee’s car, just behind and impatient to get past. Winning here big-time was Nigel Greensall, the yellow BMW started by David Gooding free of any penalties, and now on it’s way to fourth place once the pit-stop sequences had settled, Losing out, though, was Jas Sapra, the 15 seconds success penalty compromising the lead that Bransom had built; he resumed behind Greensall, but both had to contend with Johnny McGregor, who had come out in third place in the MacG Racing Mazda RX8, and wasn’t making it easy. Greensall was on a roll though – once he took the Mazda, it was Neil Wallace’s Ginetta; Wallace could not match the pace of vastly experienced first-stinter Astley,  and soon Greensall’s E36 was in second place, but Hizzey out front maintained his pace, and with an E36 some 20 years older than the leading Ginetta, even a consummate professional like Greensall couldn’t close the gap, and Hizzey crossed the line 21 seconds to the good at the flag.  Jas Sapra had to work to bag third place in the closing stages, running side-by-side with MacGregor’s Mazda, and finally made it stick on the penultimate lap, then, taking MacGregor with him, Wallace’s Ginetta on the final lap.  Sixth in class went to the E46 of William and Freddie Lynch, while Axel van Nederveen’s attack diminished after the spin in his Ginetta, and he didn’t complete the full 45 minutes of the race.

Team BRIT’S Paralympians James Whitley and Chris Overend put in a superb performance to claim the Class 2 victory in the BMW 240i, constantly in touch with the back-end of the Class 1 runners, and they finished around 27 seconds ahead of the Mawdsley/Mead Scirocco, with the slightly less ostentatious Scirocco of Paul Goodlad, who again improved on his lap times, third, while Dave Beecroft and Harry Rice got to grips with the Golf, finishing fourth.

The Chandler Motorsport VW Golf had led Class 3 from the start, Rhys Hurd initially keeping ahead of the carnival of Clios, but pitted before the TSR machine of Mark Jones could get on terms. A clash with another Golf when regaining the lead saw Harry Yardley-Rose dumped into the gravel, and going no further. Thus Mark Jones and Rob Taylor took the class win, with the Invitation entry Golf of Shaun Andrews and Clive Goldthorpe second. The Chandler teenagers were still classified though, third in class but claiming the second-placed points, keeping the class title tight. 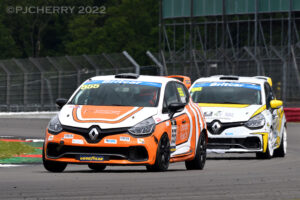 Charlie Hand was never bested on his way to the Clio victory, and the runner-up Dragon Sport machine of Rhys Lloyd and Matthew Dawson shone on it’s debut, a portent of yet another car capable of class victory, while Scott Symons third place, a win and a podium in this event, earned him the Driver of the Day award, a fitting tribute to the youngster who has only just got his six signatures. The Harrisons – James and Joe – continued their successful weekend with a fourth place, ahead of Daren Geeraerts and Steve O’Brien, while Ed McDermott and Ben Williams had a no coffee/no biscuits meeting with the officials which saw them penalised down to sixth, just in front of Jon Billingsley. 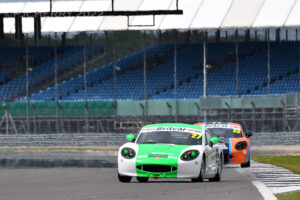 Brendan Haffner was a clear winner in the G40 Cup

Brendan Haffner was a clear winner in the G40 Cup, but it was close behind him;  Julian Daniel held second place, but a three-way battle saw him down in fourth at the flag, marauded by Peter Dilnot and Alex Turnbull on the penultimate lap, just one and a quarter seconds covering second/third/fourth across the line. Tony Whitney was fifth, and John Wood/Rob Morgan attracted a massive time penalty for pit lane speeding, finishing ahead of Andy Ball / Stephen Moore.

Scott Symons was awarded Driver of the Day