Trophy Round 5 Race 2 Report: Lee and Hizzey Win a Race of One Half 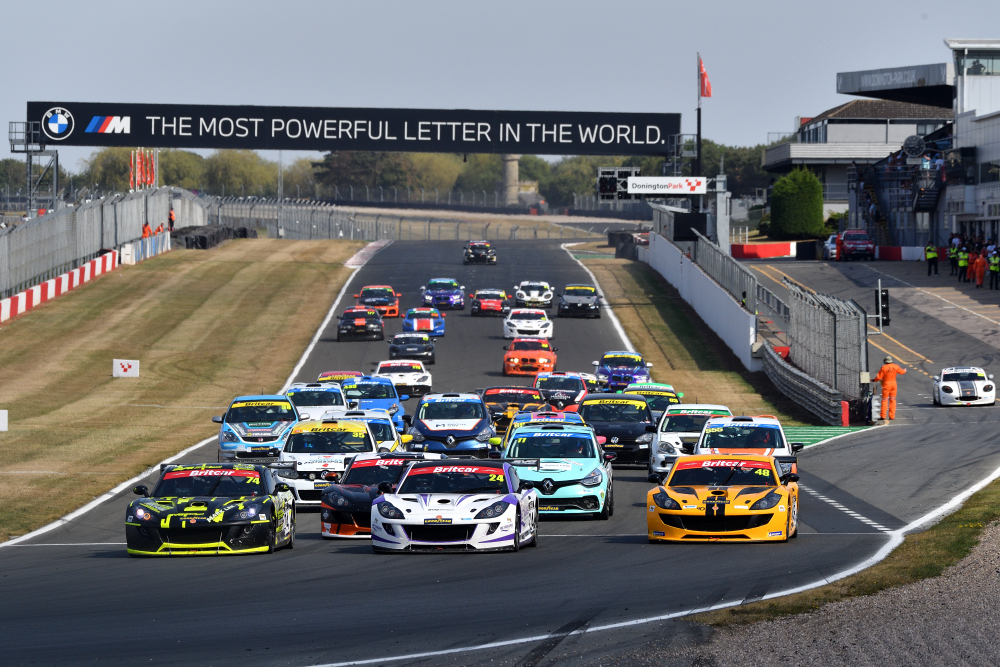 Mark Lee and Owen Hizzey, in the SVG Ginetta G56A, took a second win of the day in strange circumstances. Red-flagged after 18 minutes, the race was resumed for a 20-minute sprint, with, where applicable, the “second” drivers taking part, and the timing sheets showing the first part of the race as “information only” and not counting towards an aggregate result. Nevertheless, there was real action and excitement in that opening part, which shouldn’t go unreported. 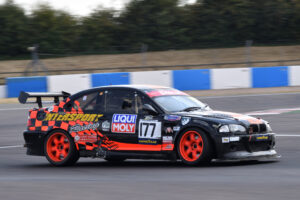 With the grid set by the result of Race 1, the two SVG Ginettas locked-out the front row,, while at the rear end, we had fast cars such as Axel van Nederveen’s G56A, the Team BRIT 240I, Jas Sapra’s E46, and right at the back, Kevin Clarke’s re-fettled and untried E36, and it was the phenomenal progress of this machine that highlighted the opening part of the race – tenth place at the end of lap one (from 35th), and by lap two Clarke had dispensed with the Clios and Golfs, setting his sight on the four leading Ginettas. It took another couple of laps to catch Sciglio, Debois and Wallace, who by now were dealing with G40 traffic, then, across the line, leader Lee was taken  –  and Clarke, once in the guards van, was now in the vanguard, in just nine minutes. Lee, though,  was keeping him honest, as they put another lap on traffic. “I was angry” said Clarke later, “angry mainly with myself.” And he wasn’t the only one – the officials had noted his track limits transgressions as he carved through the field, and slapped a five-second penalty, demoting him back to second place. There was drama as wheel bearing failure threw Rhys Hurd’s Chandler Golf into the Redgate gravel. This was recovered under waved yellows, but the Safety Car was brought out just a few laps later, as the trio of “big” Ginetta behind the leading pair – Wallace, Debois and Sciglio – were giving no quarter to each other, culminating in Sciglio ending up in the Redgate gravel as well. The sudden slowing of the field as the SC boards were shown caught out Steve O’Brien’s Clio, which tagged the back of Edward Cook’s Honda Civic, and barrel-rolled into the gravel up to Coppice, causing the race to be immediately red-flagged. O’Brien suffered a fractured arm, and was thankfully in good spirits as he left the circuit. 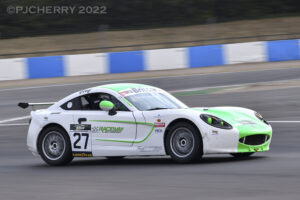 So, part one was a grid-setting exercise, and there would be a 20-minute sprint to the flag, the mandatory pit-stops now presumed to have happened. Owen Hizzey led away from the rolling start, with SVG stable-mate Ian Astley behind, being harried by Bryan Bransom’s BMW E46, with Aldo Riti in the Kevin Clarke BMW slipping back to fourth, ahead of Axel van Nederveen’s G56A. Class 2 leader Arthur McMahon retired his Civic after two laps, while Rhys Lloyd led the Clio contingent – just – and Marc Warren headed the G40 group, though the chance of a win was thwarted when he ended up in the Coppice gravel, and when Bryan Bransom’s BMW pulled off just after the Old Hairpin too, the Safety Car was deployed. There were barely five seconds of the race left when the field went green again, leading to a one-lap shoot-out to the flag, Hizzey got away, and claimed the win, but behind him, the engine let go on Astley’s G55A, and Riti seized the opportunity, his second place just 1.801 seconds behind the winning Ginetta being atonement for a fraught day. Astley made a smoky finish to third, ahead of the three Datum Motorsport Ginettas of van Nederveen, Anastasi and Sciglio, with 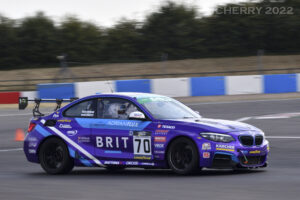 Jonny McGregor’s Mazda RX8, stuck in third gear, the last of the Class 1 finishers. There were no heroics in Class 2, with James Whitley bringing home the Team BRIT BMW240i to win, ahead of the first-time outing for father and son duo Edward and Oliver Cottam, with Paul Goodlad third in the JW Bird Scirocco. In Class 3, Robert Taylor just squeezed the win in the #77 TSR Golf, with Harry Yardley-Rose’s Chandler example less than  quarter of a second behind at the flag, while lone-driver Will Puttergill continued to impress , taking third in his Honda Civic. Fourth was the Fiesta of John Cooper / Oliver Hunt, and the luckless #7 TSR Golf of Anthony Rodgers  and Fynn Jones led the Team BRIT BMW 118 of Tyrone Mathurin/Paul Fullick home in fifth and sixth.

But it was the Clios that had the closest finish –  up to the caution period it had been Charlie Hand chasing Rhys Lloyd, but bunching-up under the Safety Car led to a fraught final lap, and exiting the last corner, Jack Meakin stormed through the middle to what looked like a four-car dead heat across the line, with the Class 1 MacG Mazda also on the outside. The Mazda was just 0.010 ahead of the Clio trio according to the timings, with Lloyd taking the class win 0.155 ahead of Meakin, and Hand 0.160 adrift, while Richard Ashmole had joined the party too, just 0.200 behind. A seemingly out-of-form Scott Symons trailed the leading pack, while Joe and James Harrison finished a lap down.