Trophy Round 6 Race 1: Regulars Give In To Stacey 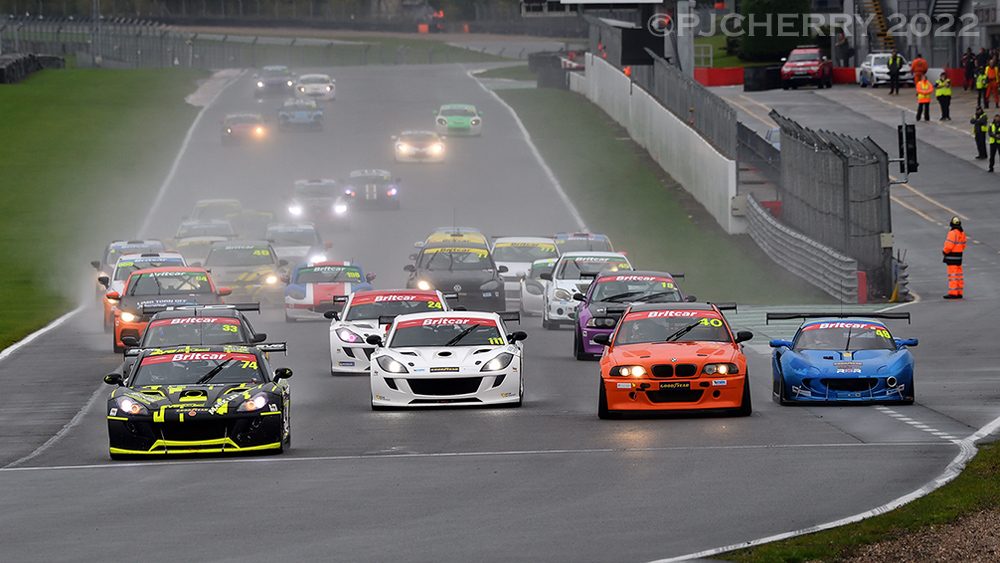 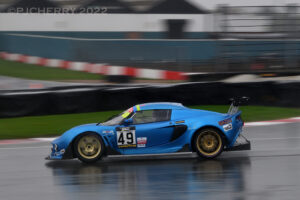 With qualifying being a wash-out, and cars doing the required laps behind the Safety Car, the grid was set in Championship points order, in class groups, with the front row comprising friends and rivals Mark Lee (Ginetta G56A) and Bryan Bransom (BMW E46), though as the lights went out for the rolling start, Stacey, from the fourth row, switched sides on the run up to Redgate, and powered round the outside to take second place behind Lee. The midfield pack scattered around Paul Goodlad’s spinning Scirocco, causing Paul Fullick’s Team BRIT BMW 118 to get stuck in the gravel, though he was quickly pushed out by the marshals, and on his way. Johnny MacGregor got the Mazda RX8 into second place down the Craner Curves, but Stacey fought back as they slithered around the Melbourne loop, and regained the place as they completed the first lap. Behind, Bryan Bransom was holding-off a fast-starting Paul Plant, who had made up 15 places on the first half-lap in Barry McMahon’s Alfa Giulietta, and they were soon both past the Mazda, while at the front Stacey, usually favouring a wide line around the hairpins, sneaked down the inside of Lee at Goddards and took the lead. Racing in a teenage rampage were Jack Meakin, Harry Yardley Rose and Charlie Hand, with nothing between the Golf and the two Clios, and, as the pit window opened 20 minutes in, fourth-placed Plant was the first to come in, handing the Alfa to Barry McMahon. Also pitting early was Chris Overend in the Team BRIT BMW240i, from way down the order after a starting issue, and a cautious stint in the slippery conditions. Once the field settled after the pit stops, the top three were well spread out, with Stacey’s Lotus taking the flag, unbeatable in an exemplary drive, over 16 seconds ahead of Owen Hizzey, who had taken over the #74 Ginetta from Lee, with Jas Sapra, in Bransom’s BMW, over a minute shy of the leader. 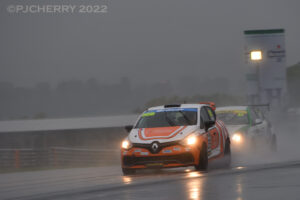 Fourth overall was the amazing Charlie Hand (right), winning the Clio class, with Josh Tomlinson bringing home the MacG Racing Mazda RX8 fifth. Behind him in Class 1, Callum Noble was a welcome returnee in the Thorney Motorsport BMW E46; he ran with the pack, but picked up a penalty, as did Axel van Nederveen in the Datum Motorsport Ginetta G56A. Barry McMahon capitalised on Paul Plant’s earlier stunning stint in the Alfa Giulietta, heading the spread-out Class 3 contingent, though Rhys Hurd and Harry Yardley-Rose claimed the valuable top points in the Chandler Golf as the first registered entry home, ahead of lone driver Anthony Rodgers in the #7 TSR Golf, and father-and-son duo Steve and Edward Cook’s Honda Civic, with erstwhile front runners Mark Jones and Rob Taylor atypically not gracing the podium in the TSR #77 Golf, not helping their points status. After losing time in that first corner avoidance, the Team BRIT BMW118 recovered well to sixth in class, Tee Mathurin taking over from Paul Fullick.

We go down the order to find the Class 2 winner, James Whitley taking the Team BRIT BMW240I from the guards van to the vanguard of the class after a cautious back-row start, finishing ahead of two invitees, the Golf of Jack and George Wright, and Oliver Cottam’s Ginetta GT5, the 16-year old being the fourth generation of the Cottam family to race at Donington, and allegedly the undisputed world Laser sailing champion and the youngest aerobatic pilot. Arthur McMahon was fourth in his Civic, ahead of more invitation entries, Fynn Jones and Rob Ellick in TSR’s newly-finished Golf, and Julian Daniel, the regular G40 pilot trying his hand in a higher-spec GT5 machine, while an early spin, and a subsequent pit stop penalty delayed regular podium visitor Paul Goodlad. 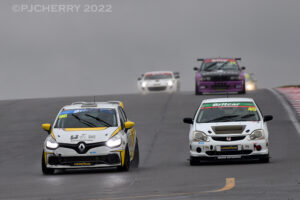 There’s not much to choose between the Clios and the Class 3 Golfs and Civics, the groups regularly mixing it on track, though the Clios made the best of it in this race, Westbourne team mates James Black and Jack Meakin following Hand amongst the Class 1 cars to second in class, ahead of Rhys Lloyd and Matt Dawson in the Dragonsport example, with lone drivers Richard Ashmole and Scott Symons finishing ahead of the enthusiastic Harrison brothers, Joe and James.

Brendan Haffner continued his late-season domination of the G40 Cup, despite picking up a hefty penalty for a pit stop infringement, still classified ahead of class champion-elect Peter Dilnot. Andrew Hudson completed the class podium, with Tony Whitney / Jez Sussex fourth, and Alex Turnbull, while the Simon Green Motorsport G40 of Dan Morris and the boss himself sadly pulled of before the finish.