Trophy Round 6 Race 2: Double Win For Will Stacey 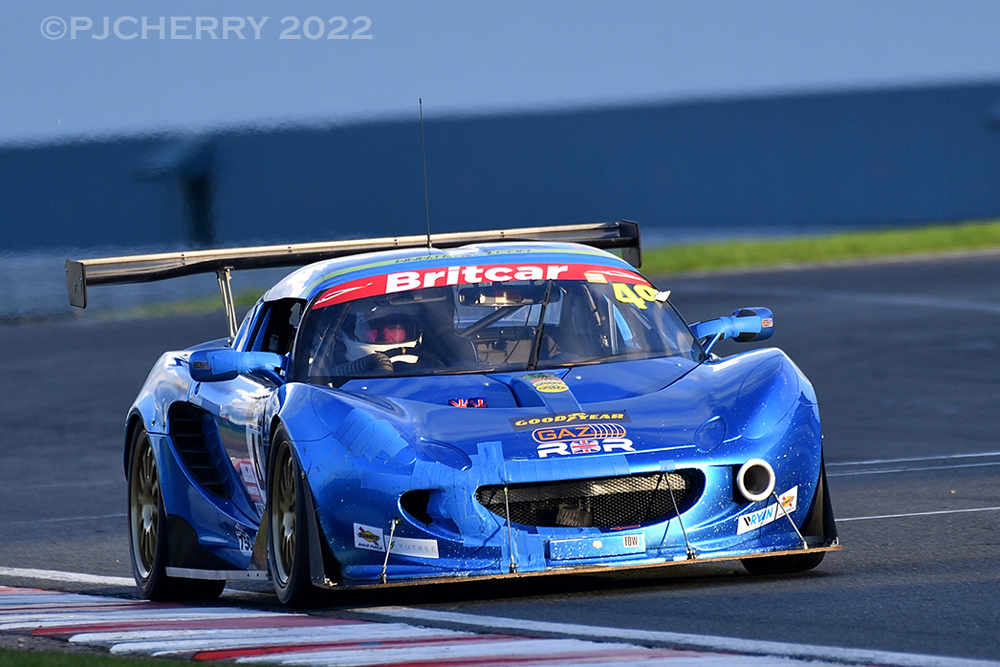 He did it again – Will Stacey made short work of the foreshortened Race 2, making a clean sweep in the Rob Boston Racing Lotus Elise in drier conditions.

This time Jas Sapra had got the measure of Stacey’s starting methodology, and from the second row the orange BMW powered between the pole-sitting Lotus and Owen Hizzey’s Ginetta; Hizzey jinked left to seemingly give the BMW space, and Sapra took the lead around Redgate, though Stacey took it back going into the Old Hairpin, and aside from one lap during the pit-stop sequence, was never headed again. Hizzey seized second place down the inside of Sapra at the Melbourne hairpin, and with Sapra jinking left and right across his back, Hizzey gave plenty of room for his mate and rival in the BMW make a pass through Redgate, but it didn’t happen, and now Sapra had a fast-starting Ginetta driven by Ian Astley to contend with. 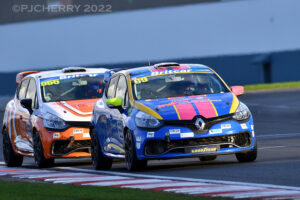 Astley, though, had the front left light cluster on his Ginetta come adrift, spending half a lap with it jammed in the wheel arch before it catapulted away, losing time and falling behind Callum Noble’s BMW, and into the hands of the squabbling Westbourne Clios of Charlie Hand and Jack Meakin, who had taken Josh Tomlinson’s Mazda RX8, which was struggling with splitter issues. Astley pitted as he had been shown the black and orange flag, and another early pitter was, worryingly, Rhys Hurd’s Golf, stopping for a check-over after being punted off. But worse was to come, as Hurd was back in the gravel, punted off again, shortly after rejoining, and this time the Safety Car was called. Hurd’s Golf was recovered manually, and, having lost enough time already, he rejoined without pitting, and the Safety Car came in after three laps. Axel van Nederveen’s Ginetta had previously relieved Sapra’s BMW of  third place, but it was redemption time at Redgate, and the Hand vs Meakin skirmish was still raging, with Tomlinson’s Mazda now in front of them, and the youngsters’ impatience was confirmed as the Mazda got tagged coming out of Goddards, and spinning into the pit entrance, perhaps fortuitous, as the pit window had just opened. Arthur McMahon parked-up his Honda Civic, from the Class 2 lead, out on the circuit, and, with Simon Green’s G40 stranded after a spin, the Safety Car was called again. 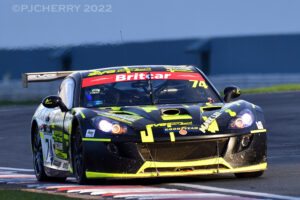 The end of the caution period coincided with pit window closing, so, with the race shortened to 40 minutes, we had a five-minute dash to the flag. Will Stacey still led, but a second pit stop, due to a team misunderstanding, for Mark Lee in the Ginetta started by Hizzey, dropped him a lap down, and it was now lone driver Axel van Nederveen in second place, and surprisingly, Edward Cook in third, in the Civic started by dad Steve. Bryan Bransom pulled the BMW started by Sapra into third, and there was precious little racing before the flag fell, with Will Stacey making a text-book drive to victory, nine seconds ahead of Van Nederveen, with Bransom a further 22 seconds back. The late Safety Car inside the pit window threw a mixed-up, jumbled-up field, and Charlie Hand was the top Clio in fourth overall, followed by Edward Cook, fifth, and taking the Class 3 win – the Cooks had their best finishes this season at this event, a feat which earned Edward the Outstanding performance of the Day award.  He had to work to keep his overall place at the end, though, as two slightly different G40s were snapping at his tail- Julian Daniel, having a one-off run in a GT5-spec machine, grabbed the Class 2 win, while coming-man Brendan Haffner took the G40 Cup victory. The Thorney BMW of Callum Noble claimed fourth in Class 1, with the remainder of the top class way down the order due to incident or accident – the Ginettas of Lee/Hizzey  and Wallace/Astley, and the MacG Racing Mazda RX8 all finishing amongst the G40 runners. 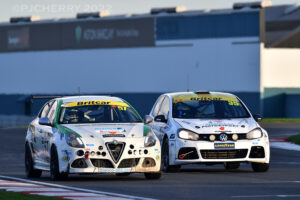 Second in Class 2 was the VW Golf of Jack and George Wright, while Paul Goodlad picked up the points as the leading registered finisher in the JW Bird Scirocco, with invitee Oliver Cottam, in a Ginetta GT5, separating him from the other class points scorer, the Team BRIT BMW 240i of James Whitley and Chris Overend, which in a low key race had done enough to secure the overall title, with the Golf of Fynn Jones and Rob Ellick retiring before the finish of the race. Behind the Cooks in Class 3, The TSR Golfs of Mark Jones/Rob Taylor and lone driver Anthony Rodgers were solit by the invitation entry Alfa Giulietta of Barry McMahon and Paul Plant (right), with Tee Mathurin/Paul Fullick in the Team BRIT BMW118 next up, with the twice-punted Chandler Golf completing the class finishers, though their class title aspirations remained just intact. The great work by Jack Meakin and James Black to win the Clio class was in vain, as a hefty post-race penalty for a pot stop infringement dropped them to fifth, with Scott Symons and Richard Ashmole completing the class podium, and the Harrison brothers fourth, while Rhys Lloyd and Matt Dawson endured some contact in the Dragonsport Clio on their way to sixth. With Brendan Haffner on a wining streak, Peter Dilnot took second in the G40 Cup, with Tony Whitney / Jez Sussex third, while Andrew Hudson and Alex Turnbull completed the class finishers.