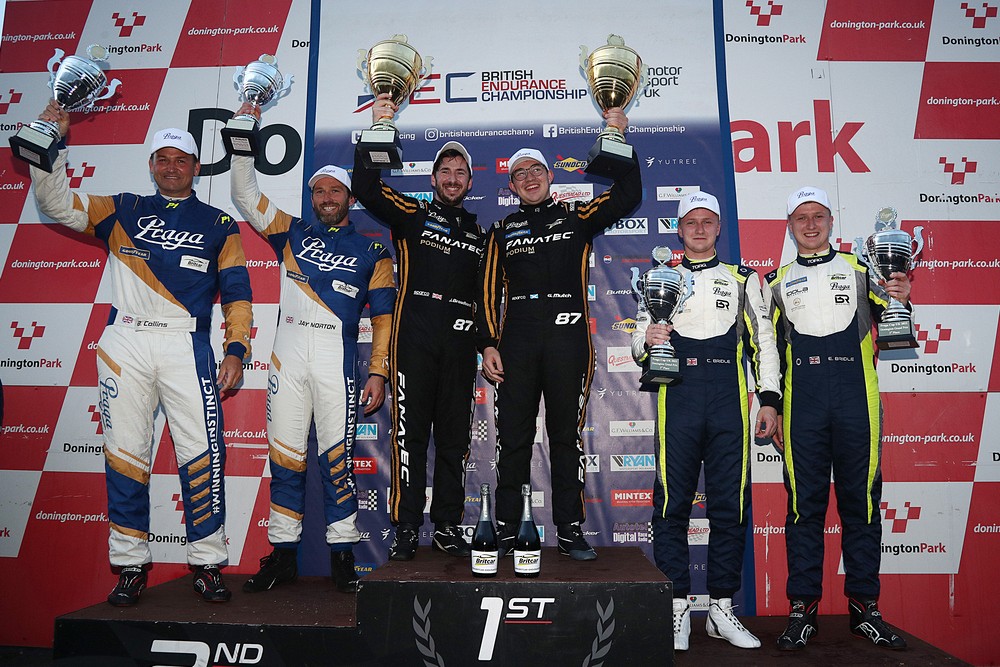 A thrilling chase in the Donington Park dusk saw another victory for the Fanatec Praga Team87 car of Gordie Mutch and Jimmy Broadbent. This result leaves them with practically both hands on the Championship as closest rivals Scott Mittell and Charles Hall ran into trouble on lap one.

The Praga R1 – known as ‘Frank’ – returned to the grid and delivered the strongest drives of the season from team-mates Ben Collins and Jay Morton, each putting in a brilliant stint behind the wheel. Despite this, they fell just short of claiming a first win.

And it was the Donington experts who finished in third; the Bridle twins claimed their third consecutive podium in the Praga Cup, adding to their strong form in the second half of this season. It was further good news for Idola Motorsport run cars as Praga Cup debutant Dominic Paul and the returning Alex Fores took home fourth place, meaning it was a brilliant 1-2-3-4 for Idola Motorsport run R1s. 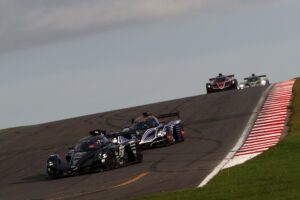 At the start of the race, Mutch took the lead straight away, flying around the outside of the no.77 at turn one. For Mutch, this was the well needed perfect start to the race; for Scott Mittell, it was exactly what he did not want as he became bogged down in the pack, losing places before being spun-off into the Melbourne Hairpin by Rob Wheldon who looked to have missed his braking point. This incident brought out the safety car, however, Mittell was able to continue. When the safety car released the pack, Mutch was leading Ben Collins who had made a lighting start from fifth on the grid.

For the other Championship contenders at RAW Motorsports, the race started badly, continued badly and then ended worse, in a disaster of a day which saw them out of the running for the Championship. It started with an ‘off’ in qualifying, then a spin on the race warm-up lap, a collision with the Mittell Cars no. 77 on lap one and then a mid-race retirement.

Collins and Mutch traded fastest laps throughout their stints on the limits of their machines throughout. Further back, Chris Wesemael in the no.29 R1 defended from the young Alex Fores in the no.86, as the pair duked it out for fourth place at the time. Like Wesemael, Ed Bridle in the no.84 R1 also had his mirrors full for the majority of his stint as he kept behind Shane Kelly, who was again driving solo for the University of Wolverhampton Racing team. 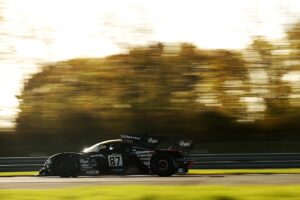 During the pit-window it was the no.87 (left) that pitted first, giving Collins the chance to overcut for the lead. Broadbent exited the pits and his out-lap was fast enough that when he came around he kept the net lead with Morton emerging behind. However, at no point in the second stint did it look like Broadbent was just going to drive away. Morton stuck with him every lap and closed within a second of the no.87 with about ten minutes to go. However, any chance of attacking Broadbent was quelled as Morton could not find a way past traffic for the majority of a lap, and Broadbent, who had found a way past, quickly extended the lead to four seconds. Despite this, Morton still closed back to within a second on the final lap, showing he had the pace to win.

Behind the lead pair, and the no.84 of the Bridles who had had a very quiet second stint, it was the no.86 of Dominic Paul and Alex Fores which took fourth. Paul, in the second stint, caught and passed the Mittell Cars no.29 now in the hands of Dan Gore, who made it difficult for the debuting Paul.

Rod Goodman took home fifth place honours ahead of the Mittell Cars no.77 who benefited from the late retirements of the no.11 UWR machine and also the sister no.29 Mittell Cars R1. 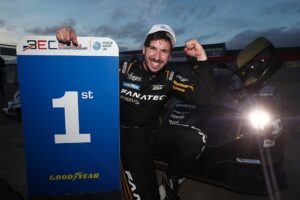 Speaking after the race, Jay Morton said; “That was the race of my life. A couple more laps and I’d have caught Jimmy for sure.” Morton’s co-driver and mentor, Ben Collins, commented; “I’m so pleased for Jay. What a fantastic performance. To be back on the podium at the last round of the year is mega.”

Meanwhile Jimmy Broadbent (right) summarised his feelings as “a mix of disbelief and relief.”

To watch the race in full visit the BARC YouTube here: https://www.youtube.com/watch?v=TKztHtFX76A