It’s tight at the top of the points table as the Championship reaches mid-season, and the Class 2 Team BRIT BMW240i of Paralympians Chris Overend and James Whitley heads the overall standings with 178 points, taking in four class wins out of six races, and a clean sweep of poles and fastest laps. Just one point behind, though, is Junior Saloons graduate Charlie Hand, also leading the Clio Class in his Westbourne Motors machine. Third in the standings is Ginetta G40 Cup competitor Peter Dilnot, who has become the man to beat in that class over the last four races. The Clios, mixing it with the Golfs in Class 3, are providing some exciting racing, and heading Class 3 is the TCR squad, with their #77 Golf shared by all team members – Rodgers, Taylor, Mark Jones and Fynn Jones, variously through the season, with teenagers Harry Yardley Rose/Rhys Hurd posing a threat in the Chandler Golf; they share 159 points with second-placed Clio pairing James Black and Jack Meakin, while in the G40 class, Julian Daniel has had a run of podium finishes that claim him second place in the class standings. 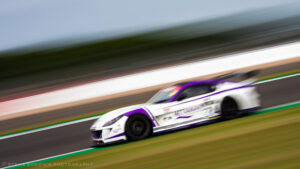 You have to look down the overall order to find the leading Class 1 contenders, such as been the competitiveness and mixed fortunes. It’s basically a BMW vs Ginetta G56 affair, with the G56A of Mark Lee / Owen Hizzey 14 points ahead of Axel van Nederveen in a similar machine, with the BMW E46 of Jasver Sapra and Bryan Bransom third.

The lure of the Silverstone GP circuit has attracted a number of registered returnees, and a host on Invitation entries, which could well cast a new perspective on the points table, and will no doubt have an influence of race positions – the BMWs of Lucky Khera/Lee Frost and Kevin Clarke/Aldo Riti starred here last month in the National circuit.