Brands Hatch Indy Race 2 – Tyres, Toughing It Out, and Timing 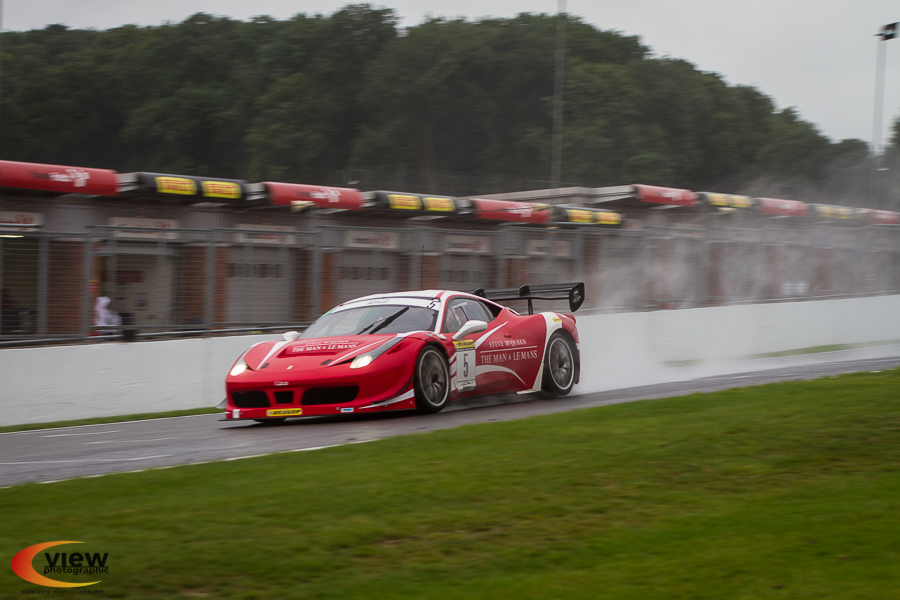 "Stay out of the pits" is a common instruction in endurance racing, a format that Johnny Mowlem is well-experienced in, and heeding that advice assisted him and Bonamy Grimes to post their second win of the day in the FF Corse Ferrari 458 Challenge in a race of changeable weather conditions, while in the Sprint category, stablemates David Mason and Calum Lockie also minimised their dwell time to take victory in the GT3-spec 458.

Rain was forecast to blight the afternoon’s two-hour race, and the two categories of competitors – Endurance going the whole way, and the Sprint runners doing just 50 minutes – performed their warming-up laps on a damp track, so wet tyres were the order. The grid, based on the Race 1 result, saw Lockie’s Ferrari atypically on the third row, but he made short work of getting towards the front once the red lights went out. Grimes led from pole, with Mark Cunningham trying to grab a slice of the action in the Porsche 997, but Lockie was on Grimes’ tail before the end of the opening lap, and by the second tour was in the lead and pulling away considerably. Witt Gamski made a cautious start in the 458 GTE, but was recovering, cutting through the Ginettas and passing Cunningham’s Porsche to establish three Ferraris at the front. Not getting away at all, on the other hand, was Ed Moore’s Ginetta G50, a drive shaft failing as the car climbed out of the pitlane exit. It was pushed back down the pit lane and the Tockwith team set about effecting a repair, rejoining 12 laps into the race, though Sprint category colleague Richard Woods was pitbound shortly after, retiring the Ford Focus shared with Richard Wakefield with oil pressure concerns. 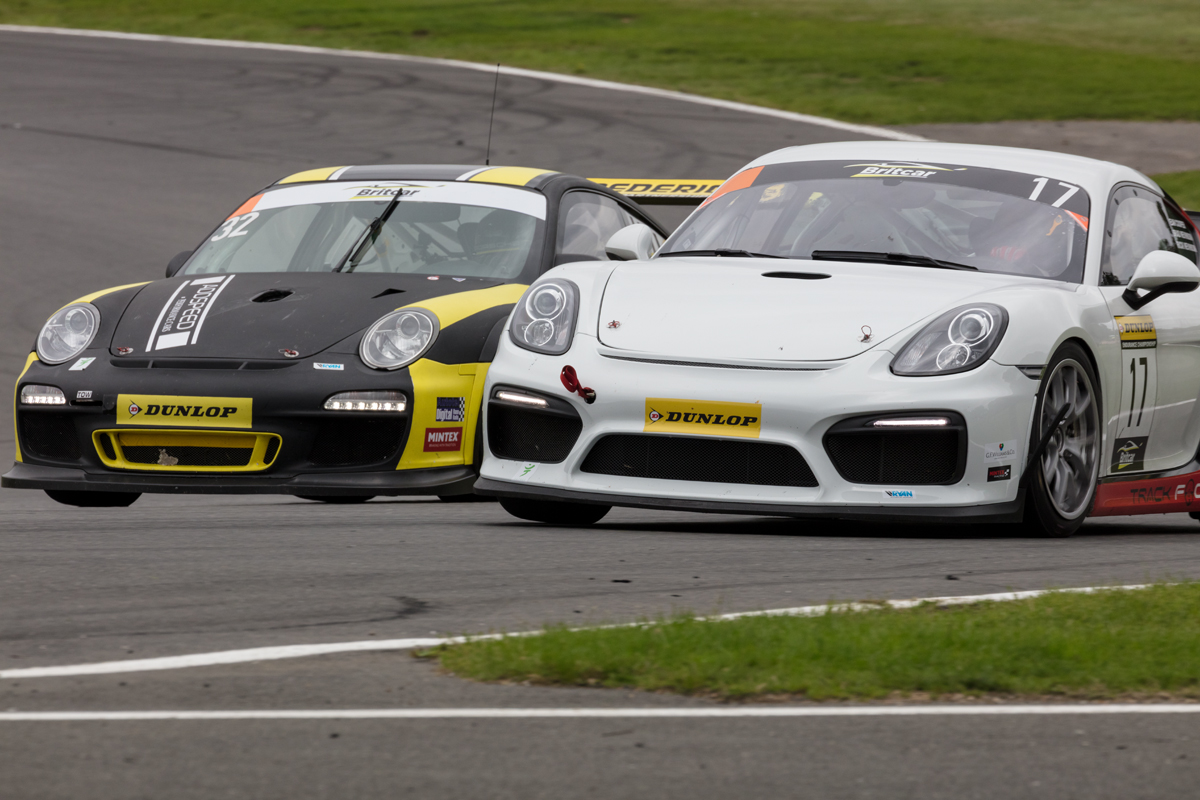 As usual, the three Team Hard Ginettas were fighting an internecine battle, but on wet tyres had no answer for Mark Cunningham, who had no degradation issues, and managed to seize third place back from Witt Gamski’s Ferrari. So, with some cars now scrabbling to find the wettest parts on a drying track, a call for slicks may be in order. Gamski was the first to take the call, then the Synchro Honda of Alyn James, followed by a whole raft of the other runners. Significantly staying out on wets, though, was leader Grimes, and Steve Tomkins in the Newbridge Porsche Cayman, toughing it out. Also keeping the wets on for the duration of the Sprint race was David Mason; Calum Lockie had brought the category-leading Ferrari in for its mandatory stop in the midst of the wets-to-slicks melee, but explained: "It takes more pit-stop time to change tyres, there’s not much more of the race left, and staying on wet tyres won’t affect David’s driving style".

That was the right call by FF Corse – Mason did go on to win the Sprint race, 33 seconds ahead of lone-driver Sean Cooper, who had put in an understated but impressive performance in the Track Focused Porsche Cayman – no histrionics, no drama, just a perfect drive rewarded with second place overall and the Class 3 victory. Similarly, the Kristian Prosser/Simon Baker BMW M3 stayed out of trouble, the pair finishing third overall and Class 4 victors, whilst a call for slicks, then a second pit stop, dropped the Benett/Fothergill Porsche to the runner-up spot in Class 3, the same fate befalling the Hopkins/Sleigh VW Golf, which slipped behind one-stopper Rob Baker who’s Smart took the Class 5 win again, redemption for a unsuccessful start to the season. Despite the team’s valiant efforts, the Tockwith Ginetta was too far back to be classified, giving no reward to the teenagers who had performed magnificently, Marmaduke Hall even unlapping himself from a front-running Ferrari in the wet conditions!

But back to the Endurance race – Grimes now led, still on wets, though he had as quick spin at Clearways, with Steve Tomkins, the occasional racer in a hired-in Newbridge Porsche Cayman on wet tyres, a magnificent second, plugging around and making no mistakes, though Adriano Medeiros was flying in the Eureka BMW E46, and grabbed a lap back from the Cayman in a courageous move through Paddock. 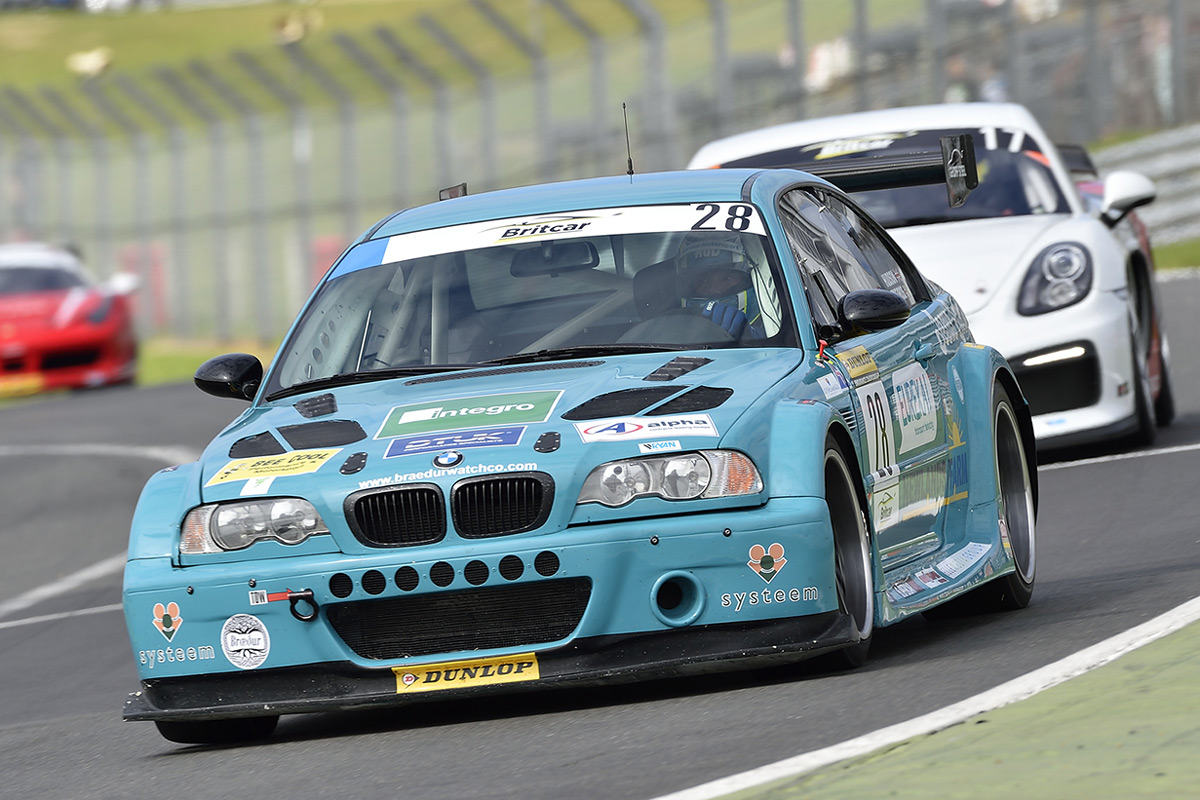 The early pit stops for slick tyres had thrown the usual stint-syncing out; both wet-shod cars stopped at their strategized times – Grimes first, keeping the wets on for Johnny Mowlem as the rain was starting again, and Tomkins amazingly from the lead of the race, again not changing the tyres for Glebs Stepanov, in his first-ever racing event, to take the Newbridge Cayman to the flag.

This brief spell of leaders’ pit stops left Mark Cunningham in the overall lead – not for the first time this season – but it was short-lived, and he too came in for a second time, handing the Porsche to dad Peter on wets again. "Awesome, though I think we’re punching above our weight" said Mark after his stint.
With all of the runners now on wets, some form of normality was restored to the order – Johnny Mowlem led by two laps, by dint of taking only one pit stop – with Joe Macari second in Witt Gamski’s Ferrari, and the three Team Hard Ginettas split by the Cunningham Porsche, Rob Hudson’s Eureka BMW E46, and Alyn James in the Synchro Honda Civic, with the Cuda Drinks Ginetta G50 tail-ending the short field. First-time racer Stepanovs began to slip down the order as the Britcar regulars passed him systematically, and with just 15 minutes to go, the Class 5 Synchro Honda held fifth position overall, but was overtaken by Simon Rudd’s Ginetta, recovering from an earlier wheel nut issue that prolonged a pit stop.

Macari was safe in second place, but the MJC/Furlonger team were unsure, due to the out-of-sync pit-stops, if they had adhered to the minimum stint-length ruling. A trip to Race Control to see the men in serious shirts confirmed that Witt Gamski owed the race another four minutes, so the 458 GTE was forced to pit for a third time to allow Witt to perform the requisite laps, relegating them to third overall.

So, a win-double for Bonamy Grimes and Johnny Mowlem in changeable and challenging conditions, aiding Grime’s pursuit of his Le Mans ambitions under Mowlem’s Red River Sport tutelage. Team Hard engineer Aaron’s prediction was correct, the squad’s #285 G55 in the hands of Darron Lewis and Tom Knight was the best of the bunch, picking up another overall second place and Class 3 win, ahead of the Cunningham Porsche and team mates Simon Rudd/Tom Barley. Also splitting the Team Hard trio was the giant-killing Synchro Honda Civic, the conditions being a leveller for Alyn James and Martin Byford, sixth overall and the Class 5 win proving a point this weekend, and finishing ahead of the Ginetta G55 of Angus Dudley and Calum Hawkins-Row. Glebs Stepanov could obviously not maintain the momentum that Steve Tomkins established in the Newbridge Cayman, but eighth overall was a creditable result for two series newcomers backed by a top-notch team. Rob Hudson and Adriano Medeiros sealed the Class 4 win in the Eureka Racing/Geoff Steel BMW E46, and a third pit-stop for the Richard Burrows/Patrick Watts Ginetta G50 dropped them back a little, with Burrows bringing the machine to a smoky end in the pit exit road as the chequered flag fell. Sadly not making the finish was the Whitebridge Aston Martin Vantage; Chris Murphy did a solid opening stint in challenging conditions, but Matty George’s experienced feel identified that the car "just wasn’t driving properly", and retirement was a sensible option given the conditions.

The conditions, and the nature of the entry, had contrived to upset the applecart in this race – Witt Gamski himself set the fastest lap on a drying track – and allowed glory to be savoured by some who rarely get the chance. Oh, the spirit of Britcar!