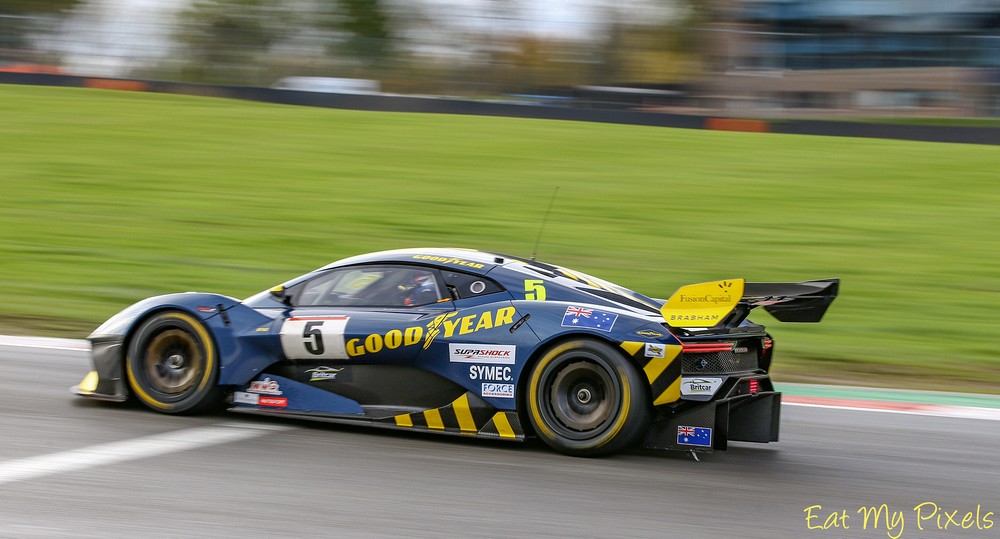 The much-vaunted racing debut of the Brabham BT62 ended with victory for Will Powell and David Brabham, though it wasn’t an easy run, the whole race was contested in challenging cold and wet conditions, and the Britcar regulars responded in spirited fashion.

The Brabham served notice of intent in qualifying, David Brabham calling for slicks as the track dried towards the end of the 30-minute session, posting 46.674, which was 1.798 ahead of Ollie Hancock, assisting Mike Moss in the Moss Motorsport BMW 1M this weekend, who in turn was nearly two seconds better than Tim Gray in the VR Motorsport Praga R1T; "I needed a few more laps to get the slicks to work" rued Gray. Touring car ace Micheal Epps was impressive in the Team Hard Ginetta G55 shared with first-timer Ben Claydon, and completed the second row of the grid.

Will Powell took the Brabham into the lead as the red lights went out at the start of the race, with Ollie Hancock’s BMW in pursuit. Paul Bailey had a spin at Graham Hill Bend in the SB Race Engineering Ferrari 488, and rejoined at the back of the pack, and Jas Sapra’s BMW M3 did the same next time round, though he then pitted through the back entrance, and rejoined the race after a check-over.

Hancock was keeping Powell honest, the gap of three seconds in the opening laps coming down tenfold before the Safety Car was deployed just eight minutes into the race, to recover Nick Halstead’s stricken SEAT Cupra.

Tim Gray pitted the Praga from third, though this wasn’t exactly a single-driver mandatory stop, as a fuse had blown, needing attention inside the garage. The majority of single drivers did take the opportunity though – Kevin Clarke’s BMW M3, Chris Murphy’s Z4, Jas Sapra again, and title aspirant Tim Docker’s VW Golf.

When the caution was lifted, Hancock had the BMW 1M on the tail of the Brabham, and on lap 19 made the move at Druids, then began to eke out a tenuous lead. Paul Bailey, recovering from his earlier spin, continued the #28 Ferrari’s magnetic attraction to the Safety Car, yet again being caught at the front of the queue and losing the best part of a lap. Pete Bassill, in the Century Motorsport Ginetta G55, was enjoying a dice with the similar Team Hard car of Michael Epps – or so he thought, the reality being that Epps was struggling with a severely misted windscreen and had little clue as to any potential place-gaining.

Bailey, as always, pitted the 488 at the earliest opportunity, and Andy Schulz was dispatched with new wets on the left-hand side. Then the rest of the two-driver cars funnelled into the pits, the last of these being leader Hancock, handing over the BMW 1M to Mike Moss, and David Brise, being relieved by Alan Purbrick in the ALP Racing Saker. Toughing it out, though, was Lucky Khera, driving alone for this race in the newly-acquired Ferrari 488 Challenge run by Simon Green, now holding a lead of a lap over the rest of the field, though he still had yet to make a mandatory pit stop.

There were niggling problems for some – Tim Gray pitted the VR Motorsport Praga once again, this time to sort a door hinge issue, dropping him down the order, and Emily Linscott, having taken over Pete Bassill’s Ginetta G55, made several stops to resolve a loose seat concern.

David Brabham was now in the car that bears his iconic name, and was asserting his considerable experience, taking chunks out of the advantage held by second-placed Mike Moss, and seizing the place with 20 minutes of the race left, though taking the lead would be easier, as Lucky Khera played his single-driver pit-stop regulation to the hilt, coming in with just a minute to spare, and handing the top spot to Brabham.

Once settled in the lead, Brabham stroked the BT62 home, though behind him second place was far from secure. Mike Moss, consolidating Ollie Hancock’s stunning first stint in the BMW 1M, had the headlights of Lucky Khera’s Ferrari looming into his mirrors, and the Ferrari took the position in a move around Paddock on the penultimate lap of the race. Not wanting to lose touch, Moss overdid it at Graham Hill Bend, spinning, and cautiously returning to the track.

So, a historic win first time out for the Brabham BT62, finishing 11 seconds ahead of the opposition, with the team managed expertly by Martin Short and his Rollcentre Racing right-hand men. And it was historic for the other podium finishers too; single-driver Lucky Khera was magnificent in the newly acquired Ferrari 488, ignoring the opportunity to take an early pit stop under the Safety Car, and taking the fight to the dominant Class 2 BMW 1M. That in itself, is a story – Ollie Hancock took the car to places it handed been before, providing valuable set-up advice during testing which reaped benefits in the race, aided of course by his considerable driving skills, and the ever-improving Mike Moss.

Kevin Clarke, who has driven just about everything from short-circuit Hot Rods to GT Cars, in all sorts of conditions, was exceptional in the old Intersport BMW M3, coming home fourth overall, and heading Class 4 as an Invitation entry, ahead of Andy Schulz, who was nursing traction issues in the Ferrari 488 and unable to make his usual slice through the field after the inevitable Safety Car fiasco – no maximum points for Schulz and Bailey, though they retained their place at the top of the points table going into the final round.

Sixth overall, and heading Class 3, was the Hedgehog / Century Ginetta G55 of enthusiastic amateur Pete Bassill and teenager Emily Linscott, a sensational performance in their first night race, and particularly for Emily, who endured slipping-seat issues. They finished ahead of Tim Docker in the Maximum Motorsport VW Golf, who was the Class 4 winner.

Pro-driver David Brise had hauled the ALP Racing Saker up to third place during the pit-stop period, and made a late stop to hand over to Alan Purbrick, who performed no heroics in the treacherous conditions to come home eighth overall, and third in Class 2.

The two Team Hard Ginettas didn’t have the best of luck – a last lap puncture for first-timer Steven Chandler in the #35 car started by Nick Scott-Dickeson ended in a ninth-place finish, while fellow race debutant Ben Claydon, in the #37 car started by BTCC ace Michael Epps, found racing with the steamy windows untenable, and sensibly parked up 10 minutes from the end.

Tim Gray lost six laps with his niggling fuse and door issues, and what could have potentially been a second or third place for the Praga ended up as 11th overall, while Jas Sapra lost time too, after his early spin, and brought the BMW home 11th. The Class 5 win went to lone driver Chris Murphy, who took an early stop during the Safety Car period, and stilt took the honours despite a drive-through penalty fir a Safety Car infringement, then a further30-second time penalty for ignoring the drive-through (which he eventually took, too late, anyway). Second in class was Rob Baker’s Smart For Four, shared with regular EDF race engineer David Farrow, having his first-ever race drive. And spare a thought for Nick Halstead and Jamie Stanley, in the Maximum Motorsport SEAT Cupra, not classified after losing a quarter of an hour being recovered from the early off-track excursion.