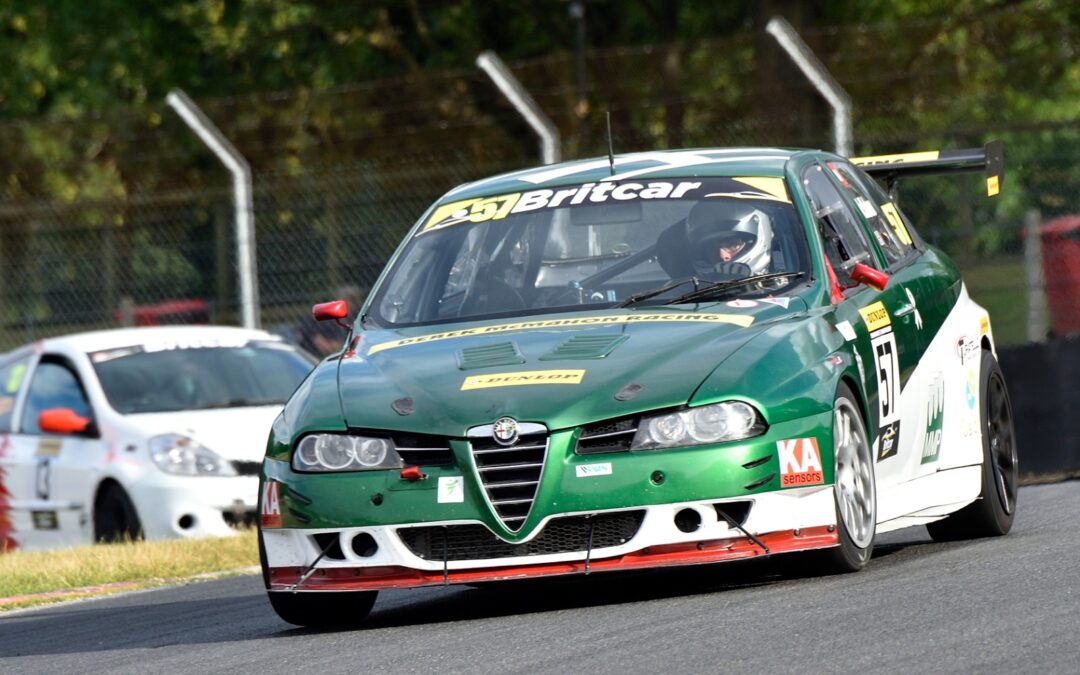 Barry McMahon, in his Alfa Romeo 156, won the opening race at Brands Hatch, but had to fight for it, and finished just under five seconds ahead of Oliver Smith’s BMW M3 at the flag, which fell under Safety Car conditions.

McMahon had set pole at 53.002 during an intense qualifying session, but the Peugeot RCZ of Charlie Campbell and Rob Smith had signalled notice of intent, annexing the front row of the grid, less than a quarter of a second slower.

McMahon led the field into Paddock as the red lights went out, and fast starts were made by Brad Kaylor’s SEAT and the Vinna Sport Ginetta G40 of Adriano Medeiros. Also making up a place was Jonny MacGregor in the MacG Racing Mazda RX8, challenging second-placed Rob Smith’s Peugeot, the pair swapping positions several times a lap before the Mazda slipped back a little. Rob Austin was an early pit visitor in the JRW Motorsport VW Golf with a throttle issue, which, after several more pit stops, halted their race early. Medeiros was on the tail of Jon Packer’s Smart ForFour, but the little Ginetta was no match for the worlds’ most powerful Smart car, and Packer eked out an advantage.

By 15 laps in, McMahon’s Alfa had a 14-second lead over Rob Smith’s Peugeot, and Oliver Smith, in the JC Racing BMW M3, had seized third place from McGregor’s Mazda at Druids. The Clio group was close, James Colburn less than a second ahead of brother James, with Aaron Thompson not far adrift, and in Class 7 , Alistair Lindsay led in his VW Golf, that was until, 20 minutes in, multiple sheared wheel studs threw the car into the gravel at Clearways, causing the Safety Car to be deployed. 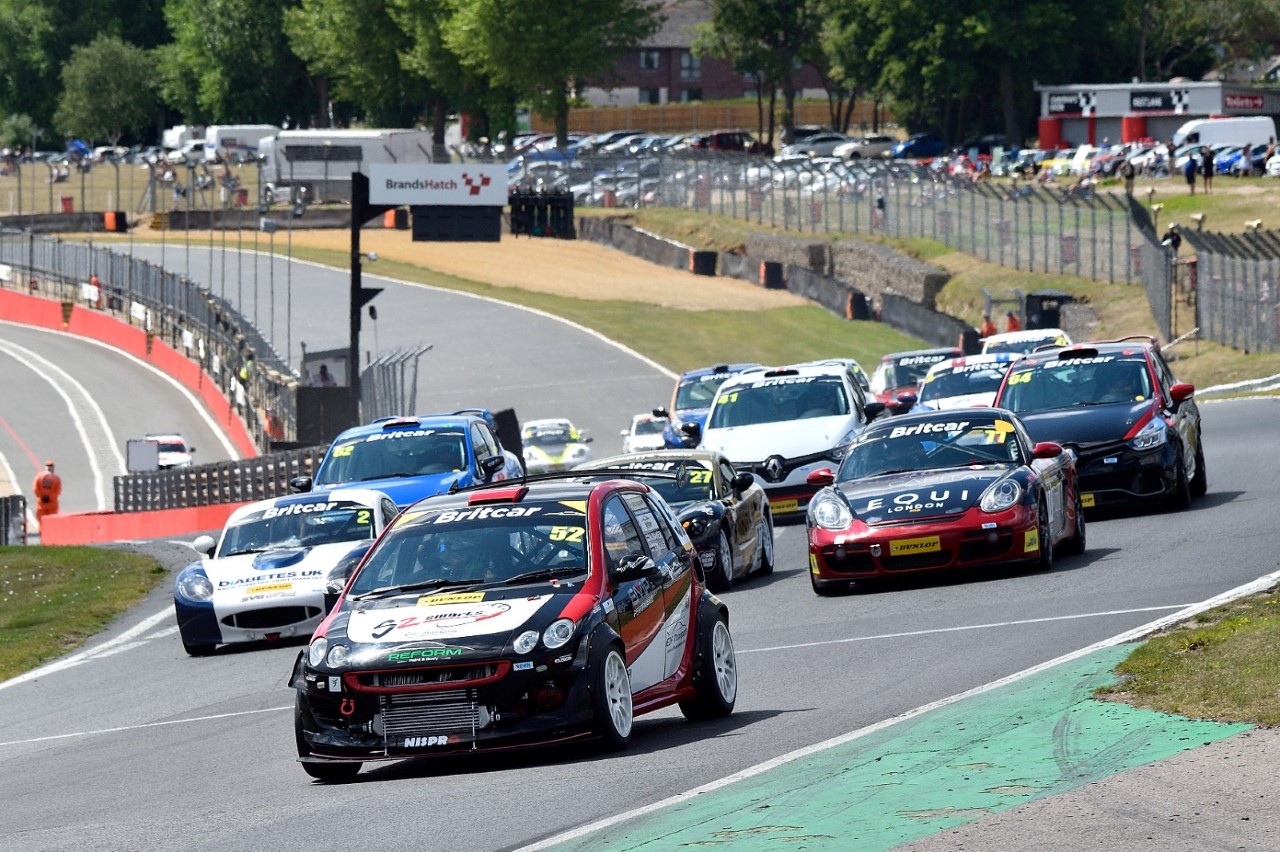 The pit window had opened just a minute before the caution started, and Brad Kaylor, Anthony Hutchins and Jonathan Barrett had already pitted when the rest of the field took advantage of the caution and made their stops. All except Rob Smith, Jonny McGregor, the Cayman of Robert Pugsley, and the Clio of Darren Geeraerts that was, they left it till later within the window. Barry McMahon was frustratingly held at the pit exit until the Safety Car train had passed, emerging just ahead of close rival Oliver Smith, and by time the caution was lifted, Charlie Campbell, now in the Peugeot RCZ, had a 42 second lead over erstwhile leader McMahon, who was in turn only five seconds clear of Oliver Smith’s BMW.

The Alfa was reeling in the Peugeot at a rate though, just eight laps was all it took to get on the tail of Campbell, then make the pass for the lead through Surtees, will eight minutes of the race left to run. Oliver Smith’s BMW was now closing down on Campbell too, but, perhaps un-nerved by a passing attempt, the Peugeot spun into the gravel at Paddock, and again the Safety Car was called, with just five minutes of the race left.

By this point, Robert Pugsley had been flying in his Cayman, taking fifth overall from Charlotte Birch’s Ginetta, then fourth from Rob Baker, now in the Smart car, but the men in serious trousers had deemed that Pugsley had transgressed a pit stop regulation, and he was hauled in to take a penalty, dropping him down the order.

The race ended under the Safety Car, with Barry McMahon still only five seconds ahead of Oliver Smith, the gap having closed back up under the caution. McMahon had seemingly cut through lapped traffic with ease to get back the lead, though he confirmed otherwise; "It wasn’t as easy as it might have looked, the Safety Car is the luck of the draw, but everybody was very polite". 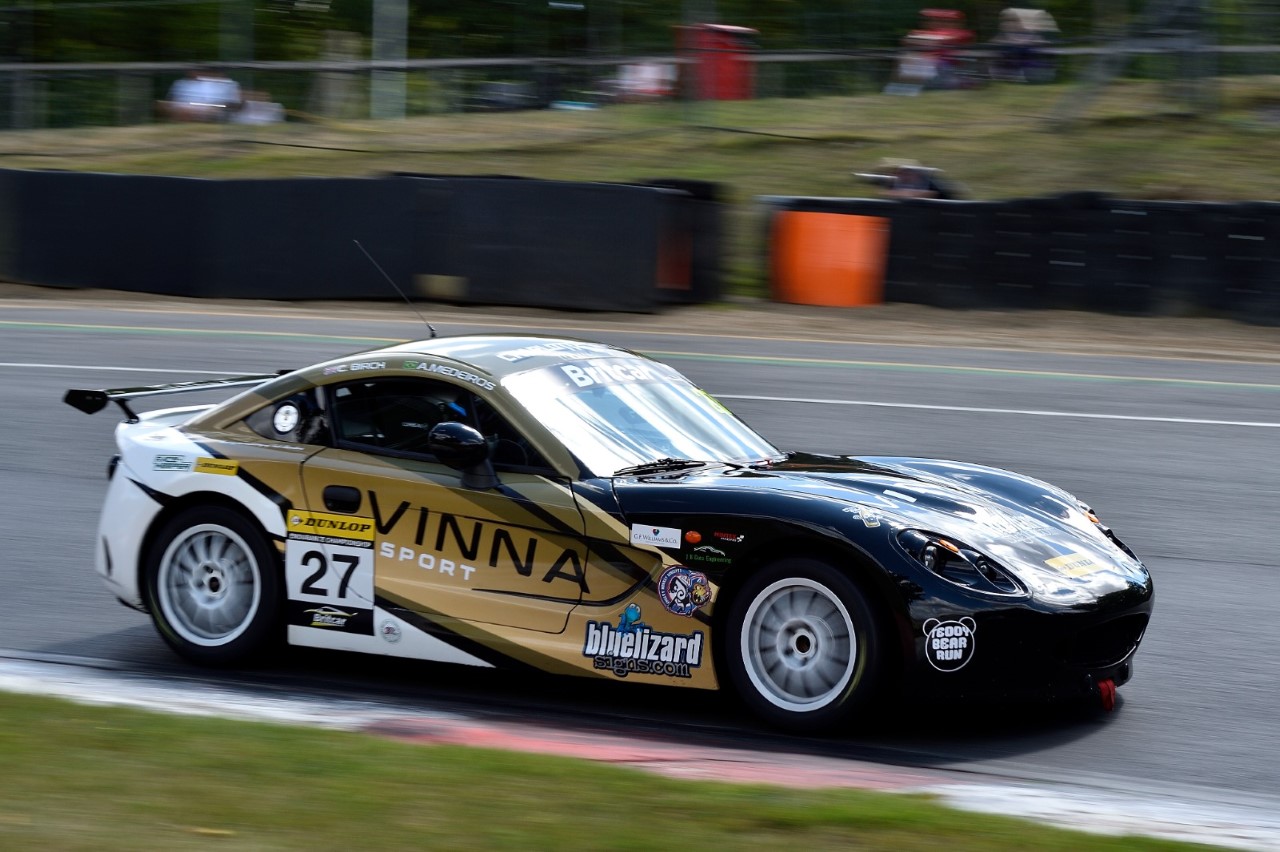 Charlotte Birch capitalised on the storming first stint by Adriano Medeiros in the Vinna Sport Ginetta G40, and third overall, second in Class 6, was a terrific result, as was fourth overall and second in Class 5 for the Smart ForFour of Rob Baker and Jon Packer, though the pace had taken its toll, and a warped cylinder head meant that they would miss the second race. Josh Tomlinson brought the MacG Mazda home third in Class 5, ahead of Robert Pugsley, who was stymied by his pit-stop error, then Anthony Hutchins’ Boxster, and the similar car of Richard Bernard. In Class 6, it was Peter Spano and Andrew Bentley that claimed the final podium place in their Ginetta G40, ahead of Brad Kaylor’s SEAT, which may have missed-out in the pit-stop/Safety Car period. Class 7 went to Jonathan Barrett’s Saxon Motorsport BMW 330, with Steve and Edward Cook’s Honda Civic next up, and third was the Team BRIT BMW 116 of Matty Street and Andrew Tucker, a massive result for Street, who has just a half a season of racing behind him, and Tucker, in his first ever race, and electing to use conventional pedals rather than the optional hand controls in the car, to challenge his rehabilitation. It was Team BRIT’s BMWs through the rest of the class result, with line driver Luke Pound finishing ahead of the 116 by Charles Graham and the team’s PR guru Darren Cook.

The Clio class gave us a good race, the erstwhile stars of ITV4’s live coverage displaying their usual verve within a mixed-class setting. James Colburn and brother Ben were barely separated by more than a second for most of the race, with father and son duo Steve and Aaron Thompson not far behind, while Westbourne team boss Richard Colburn shared with Peter Dorlin, and Darren Geeraerts raced unsullied to fifth in the class.