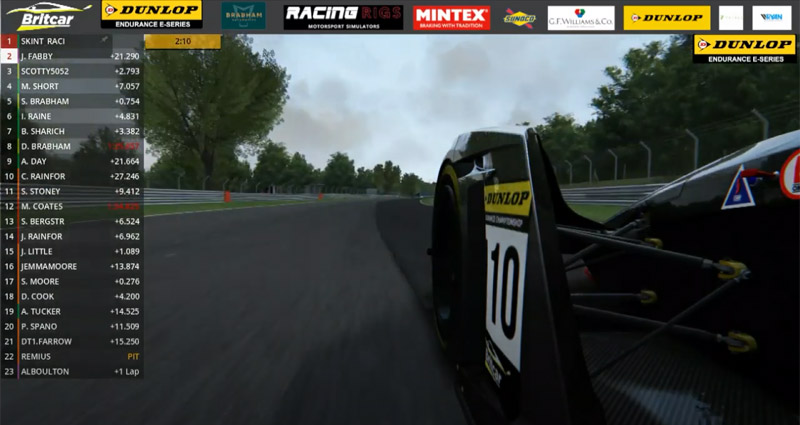 This was the event where thinks took a change – some new drivers, new cars, and a new winner; Team BRIT’s Bobby Trundley took a fairly easy lights-to-flag win in the McLaren 650S, finishing 21 seconds ahead of Jack Fabby’s VR Motorsport Praga R1T, which had to work through the field.

Both the Team BRIT McLarens served notice of intent in qualifying, with first Andy Tucker, then Trundley posting provisional pole, Trundley eventually annexing it just 0.088 seconds ahead of Tucker, while the Brabham BT62s, down the three cars due to Will Powell suffering a real "mechanical failure" in the early part of qualifying (a broken brake pedal spring on his rig), lined up third, fourth, and seventh, with surprisingly, new recruits Sam Brabham and Scott Stephenson having the edge over team boss David Brabham.

We’re used to chaotic starts now, and while Trundley was quick off the mark, Andy Tucker got bogged down, and squandering his front-row position, was heading the midfield when he spun across the track at Paddock, unfortunately collecting Al Boulton’s Praga R1T, then, seconds later at Druids, Sam Brabham and Jack Fabby, who had taken advantage of Tucker’s slowish start, made contact, letting Scott Stephenson through into second place, and Morgan Short’s BMW Z4 into third. Class 2 had a familiar opening lap – Charles Rainford, mixing it with the tail of the Class 1 contingent in his Ginetta G55, was ahead of the similar machine of Radical champion Shane Stoney, but then, not James Rainford, who had been delayed by Tucker’s first-corner spin, but a pair of real-life pro-drivers who had re-found their mojos. Shields Bergstrom, a 17-times champion in his native USA, was making Milwaukee famous in his SEAT TCR, whilst Max Coates, also in a SEAT, had Jemma Moore’s G55 on his tail.

Morgan Short and Sam Brabham managed to relieve Scott Stephenson of his second place while trading places in a dispute of their own then Jack Fabby, recovering from his first lap contact, was past the Adelaide-based Brabham engineer too, after shaking off a threat from David Brabham’s BT62. The midfield in Class 2 was tight – Dave Farrow and Darren Cook were fighting in their Ginettas, with Jake Little and Sarah Moore’s G55s, and Alain Remius in his Lotus Evora also in attendance. Trying to slice through these was the recovering and much faster McLaren of Andy Tucker; it was already fraught between Cook and Farrow – "my two-lap battle with Mr Farrow made for exciting racing. Some little ‘love’ nudges from him and some great swapping of places especially going into Surtees" said Cook – and there was inevitable contact when Tucker tried to pass them, which also left Remius with nowhere to go but slam into the McLaren. All to do again for Tucker, then, and leaving Remius just ahead of a dice between Peter Spano’s Porsche Cayman and Jake Little’s Ginetta.

Now Fabby was on the move and taking no prisoners – an audacious move on Short around the outside at Hawthorns put him in third place, and in pursuit of Sam Brabham. Short was also under threat now from David Brabham, who, having taken stablemate Stephenson, left it late on the brakes as the trio came to lap Spano’s Porsche going into Druids – there was contact between Brabham and Short, handing fourth place back to Stephenson. Max Coates, in his SEAT, had been battling with Shield Bergstrom’s similar machine, the erstwhile Clio Cup star displaying a slightly smoother style than his trademark kerb-hopping mix of balletic poise and ragged-arse thuggery, and was now up to the final podium place in Class 2.
Fabby was now on Sam Brabham’s tail, and in traffic, a gaggle of Ginettas, with Moore sisters at the head of it – Brabham tagged Sarah in a move around Druids, and David Farrow had nowhere to go as he struck the broadsided Tockwith G55. This was to be a fraught lap of the race – as the battling Ginettas came to end of the lap, around Clearways and onto the Brabham Straight, the dicing duo of Morgan Short and David Brabham came upon them; Brabham oversteered into the pit entrance, David Farrow found the gap between Jemma Moore’s G55 and the barrier a little too narrow and careered across the track into the armco on the other side.

Thirteen minutes of the race left, and Fabby’s Praga took Sam Brabham’s BT62 without much fuss. Brabham, though, had an issue with 10 minutes to go, as did Short around the same time, and Scott Stephenson took the initiative, and within no time was just half a second behind Fabby’s Praga. The Moore sisters were line astern again, younger sibling Jemma ahead of W-Series competitor and erstwhile Britcar champion Sarah, and it was close but clean. "I couldn’t give my own sister a love tap could I?  Plus, I was actually enjoying the battle, Jemma did great for her first race" said Sarah.

It came to the final lap, and there was heartache and drama through the field – heartache first for Jemma Moore, who ran out of fuel coming out of Druids, letting Sarah past, then Scott Stephenson suffered the same fate in his BT62, dropping him from a certain podium place down to seventh, and then drama, as Sam Brabham took Morgan Short’s BMW out on the GP loop, but slowed as the pair came through Clearways for the final time; Short was caught-out by the suddenly slowing and out-of-fuel Brabham, punting him into the barrier, and going onto claim third place. Also slowing dramatically, another one out of fuel, was Alex Day’s Mercedes, a pity since he had one of his best races to date with few dramas after that first-corner carnage.

So, an easy win for Bobby Trundley in the new Team BRIT McLaren 650s, showing both the car’s and the quiet 20 year-old’s potential, while similarly Jack Fabby also displayed what the turbocharged version of the VR Motorsport Praga was capable of. Conversely, both of their team mates, Andy Tucker and Al Boulton, fared less well, due to the first corner fracas". No excuses, just silly mistakes in qually put me mid grid , then punted off at the first corner. I had to pit with damage as the car was undriveable and that was my race over" rued a disappointed Al Boulton.

Morgan Short was a well-deserved third after a tumultuous race, and offered his usual eloquent synopsis: "Race 1 was a mixed bag. I had a good start making my way through the chaos on lap one, and after a few laps was able to move up into third after a mistake from Scott. However midway through the race my game froze as I went down Paddock Hill up towards Druids, resulting in my ending up hitting the wall and getting damage. That moved me down to fifth, but a mistake from Sam Brabham promoted me to fourth. Sam was able to catch up to me pretty quickly, as the Brabhams were quicker than the Z4. On the final lap, Scott ran out of fuel, moving me up into P3, but as we went past him Sam was able to send it round the outside of me up towards Dingle Dell, and I was back in fourth. But he ran out of fuel on the final straight right in front of me, and after some contact as I tried to avoid the Brabham coming to a standstill right in front of me, I was able to finish in P3".

Fourth and fifth, after a somewhat calmer race than of late, were the two MacG Racing Glickenhaus machines of Isaac Raine and Ben Sharich. The pair went into this race with higher expectations than previously, expecting a more even playing field, but it didn’t exactly pan out that way; " I knew it would be close but that was a very fun couple of races. Qualifying was difficult as you’d expect around Brands Hatch. The McLarens, Praga and Brabhams were just so fast in qually so I was lucky that Will Powell dropped out. Had a pretty good start and managed to get through without any issues for the first time in the E-Series! There was a little bit of a hold up at Druids for some reason and managed to get some minor front and rear damage which, along with the stone-cold tyres, made the car just so slow to drive. Quite happy with the fourth place though overall, as our car just doesn’t have the race pace to keep up with the other cars in front" said Raine, whilst Sharich commented " I had hoped it would be more competitive for us but we really struggled in the colder temperatures in the first race. The setup just didn’t work at all really getting heat into the tyres. Near permanent understeer throughout and I had a spin at clearways with a few laps to go but we got lucky to inherit a couple of places on the last lap".

First of the Brabhams home was team boss David Brabham, heading engineer Scott Stephenson and son Sam on the scoresheet, though they had both been sidelined on the final lap. "We got caught trying to gain as much performance as we could as the BOP which limits the performance of the BT62, so made it really challenging to run up front. We simply ran too light on fuel as both Sam and Scott ran out on the last lap. Lesson learned." explained David.

Once again, Charles Rainford was dominant in Class 2 in the CCK Racing Ginetta G55, in its new yellow livery, despite some issue with his connections; "I managed to get away well and thought I’d let the class one cars go as I had a small gap to Shane behind me, knowing that Brands Hatch is quite a tight track with a tricky first sector, thankfully I did as I almost got caught out by the spinning Team Brit McLaren at Paddock Hill Bend. From there I was staring to pull out a gap to Shane behind after a few laps! But all of a sudden I was getting freezes from my PC and with 20 minutes to go my screens went black (I use 3 27′ monitors) then they all came back on thankfully but I lost almost all the time I had gained on Shane. Thankfully my little Ginetta was handling very well so managed to pull the gap back out and take the win". Indeed, if nobody can take it to Charles at the moment, Shane Stoney is equally unassailable in the runner-up spot at the moment, third-placed Max Coates being around half a minute behind at the flag, after his exciting skirmish with fellow SEAT pilot Shields Bergstrom, who came home fourth – the pro-drivers are finding their feet in the e-format now. James Rinford, usually a podium finisher, had to fight his way back through the squabbling Ginettas after getting tagged in the first corner melee, finishing fifth, and an unlucky 13th overall, while Jake Little, Sarah Moore and Darren Cook had impressive and action-packed races; "I think I had the best race to date in ANY series" said Cook, adding "Having those battles with the Moore Sisters, Sarah and Jemma was exciting. .I was over the moon to see the two Team BRIT drivers on the start line.. well deserved positions from two very dedicated and talented SIM races. Have to say a huge thank you to Andy Tucker for helping me set the Ginetta up – I couldn’t have competed to that level without his input."