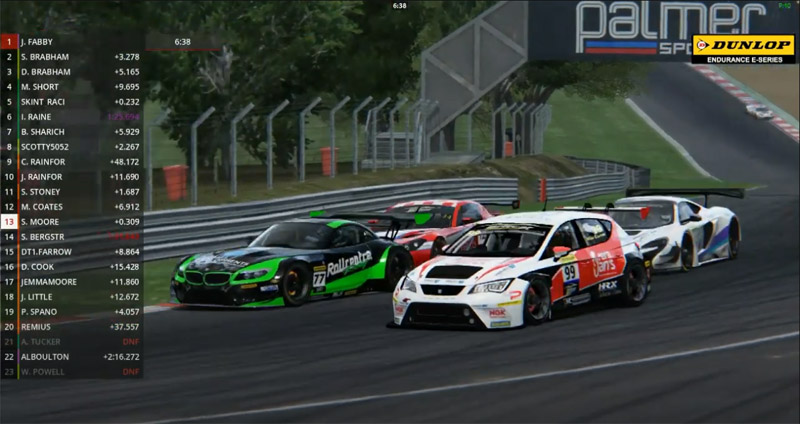 Sam Brabham took the win in the second of the races on the Brands Hatch GP circuit, but it was Jack Fabby, in the turbocharged version of the Praga R1, who really stole the show. Getting the jump on Bobby Trundley’s pole-sitting McLaren 650S (which suffered an electronic clutch/brake switchover), Fabby took an immediate lead, but was caught out by Morgan Short’s BMW Z4 in an audacious move inside Druids. The pair traded places for the first five minutes of the race, and Short led briefly, when a spin dropped him down to sixth, leaving the Praga to build a healthy lead, until a spin at Westfield with just six minutes to go allowed Sam Brabham’s BT62 through to take the win. Initially it had been David Brabham who made the running behind Fabby, but Sam had cut through the field from his poor grid slot, and after some mid-race father/son trading of places, took the initiative, with David performing solidly to come home third. "That was a fun and challenging couple of races at Brands Hatch, full of ups and downs, but overall it was another successful E-Series event. It was a great result with Sam coming through from second-last to first with four laps to go and I made it onto the podium with third. He has been gloating ever since..! We can now say three generations of Brabham drivers have won in a Brabham at Brands Hatch, my father in 1966 in his BT19 Formula 1 car, myself last November in the Britcar Dunlop Endurance Championship finale ‘In to the Night race’ and Sam in the ‘virtual’ BT62 yesterday" said a proud David.

Behind the top three, Morgan Short and Bobby Trundley each had their own recovery jobs to perform, and for the final 10 minutes of the race, that fourth place could have gone either way – Short held on, but only just, with the BMW and the McLaren almost side-by -side across the line. After a great start I was able to send it up the inside of Jack Fabby’s Praga at Druids. After a few laps of defending, the Praga got past with a brave move as we came up to a class two backmarker. I stayed on him for a few laps, but a very embarrassing spin at Dingle Dell threw me back down to sixth. I was on a mission from then on, pushing as hard as I could, getting past one of the GCCs at Hawthorn’s, and overtaking Bobby Trundley after he made a few mistakes. The McLaren definitely had the speed advantage at Brands, and was easily half a second a lap quicker. But I defended like my life depended on it, and after an amazing battle I came home in P4, just one tenth of a second ahead of Bobby" was Short’s version of events.

Sixth and seventh, together on the scoresheet as usual, were our MacG Racing Glickenhaus duo, Isaac Raine and Ben Sharich, and the pair take up the story of their respective races: "I made a pretty good start and was up into 4th after Paddock Hill. Just tried to keep it clean and managed to get past Bobby Trundley and into 3rd as he went wide at Druids and had to defend for 2 laps with the McLaren, David Brabham and Ben running very close to me! Bobby was right up behind me more or less the whole lap and I was hoping I could back him up into David and Ben to get some space but coming into Hawthorns he got a bit too close and pushed me onto the grass, letting both Bobby and David past. Myself and Ben had an agreement to let each other past if someone was clearly faster and Ben definitely was due to my rear-end damage so was going to let him past on the straight as I didn’t realise Sam Brabham was right behind! Coming down from Druids and into Graham Hill Bend, Sam made a little bit of contact, spinning me round. I dropped down to 7th but managed to get back past Ben. I had Scott behind me for a few laps until he went off and from then on it was quite lonely. I enjoyed being a bit more involved with the leaders!" said Isaac, while Ben commented "Much more competitive in the warmer race 2, to begin with at least! Had good fun being in a 4/5 car battle until I saw Isaac get taken out by one of the Brabhams then I seemed to get caught out by a glitchy moment when being passed by the Z4. Could’ve been another top 5 on legitimate pace but ifs, buts and maybes and so on. Still a fifth and seventh and no penalties is better than Silverstone last time out so achieved that target at least!"

Class 2 once again went to Charles Rainford, but this time it wasn’t an easy win – a clash with Scott Stephenson’s Brabham in the opening laps saw him thrown to back of the field, and, once in the vanguard, now in the guards van, he had to fight his way back through the field in CCK Ginetta G55. This included getting past some intense squabbles for position, primarily in the early stages between the SEATs of Shields Bergstrom and Max Coates, who seemed to have signed-up as each-other’s Nemesis for the evening. Once Coates had got free, he had Sarah Moore’s G55 to contend with, the pair giving a masterclass in close racing the professional way. Sarah got the edge at the flag, finishing just off the podium, as Charles Rainford had stolen the class lead from twin brother James’s SEAT at the half-way stage of the race, and Shane Stoney, in his Ginetta G55, followed Charles through to retain the class runner-up spot he had held, and generally always holds, for most of the race. "Probably the two most enjoyable races I’ve had so far – can always guarantee a good, clean fight with Max Coates" said Sarah Moore, while Charles Rainford commented "Race 2 was a lot more eventful – the start went very well I got away well but the end of the lap coming into clearways I saw one of the Brabhams coming up behind me so moved to the left to let him by up the inside and on the apex, I had a big lag spike and unfortunately resulted in us coming together. But thankfully managed to catch back up to the lead relatively quickly, getting past Sarah into Hawthorns and getting Shane into Paddock Hill Bend, then eventually catching up to James and getting the move done into Westfield. Overall I think the driving standards of everyone was so much better than the first two rounds. I had a fantastic evening", and Darren Cook, eighth in class in the Team BRIT Ginetta G55, was similarly enthused, commenting "Race 2 had an interesting start with two very fast cars ‘ploughing’ through the field from the rear to take a few victims out … but even then … there are winners and losers and I felt I made something out of that. All in all for me … it was my favourite race so far and I am looking forward to the next and seeing the video with the incredible Chris Hartley commentating over it. Thank you Britcar – what a night"