Britcar Dunlop GT/Production Titles: One Sewn Up, One Down to the Wire 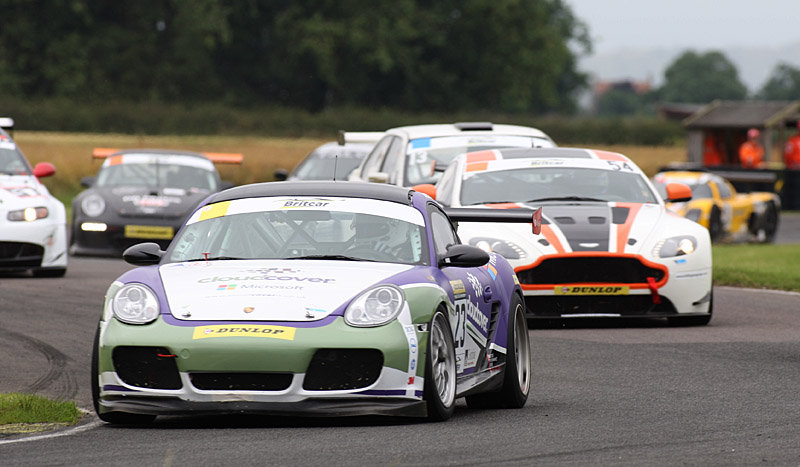 We have the luxury of two titles up for grabs here, since the Britcar organisation opened-up a parallel GT division to the burgeoning Dunlop Production Championship. The 50-minute races have proved a valuable taster-session for a number of Dunlop Endurance protagonists, though the propensity of some to compete in just one of a weekend’s double-headers is reflected in the points standings.

It’s more or less cut and dried in the GT Championship – Chris Murphy and Jonny Cocker have mounted a parallel campaign to their Endurance endeavours in the Whitebridge Aston Martin, and made a point of making their lead unassailable at Oulton Park; with a stunning 258 points, they go into the final rounds at Brands Hatch as champions-elect. Old hands Marcus Fothergill and Dave Benett have been stealing thunder as the season draws to a close, but with 174 points, they must be content with second place, which in itself is quite safe, being 97 pints ahead of Calum Lockie and David Mason, who have made sporadic forays into the championship. Spare a thought, though, for newcomers Rick and Brad Nevinson- based on current performances, and the cars around them in Class 3, they are unlikely to accrue enough points at the final meeting to usurp Lockie and Mason from third in the standings, but fourth overall in their first season of racing is quite an achievement.

Now, Mike Moss – multiple Britcar title holder, and a man that has plied his trade in both Production and Endurance championships. Aided by Tom Howard and Scott Adam along the way in his BMW E46, he tops the Production standings with 207 points. He has missed a couple of rounds, but so too has lone driver Del Shelton, and after a six-year lay-off, he has hauled his Geoff Steel-run BMW E36 up to 202 points. They both compete in the hotly-contested Class 1, so it will be winner takes all in the winter darkness of Kent. Third-placed man Andy Robinson is too far behind to trouble the motorsport mathematicians, though he could be in danger of being ousted from the bottom step of the podium by veteran campaigner Martin Parsons.

It will be cold, it will be dark, it could be damp, it could throw up some surprises, and for the Production runners, it’s all to play for.