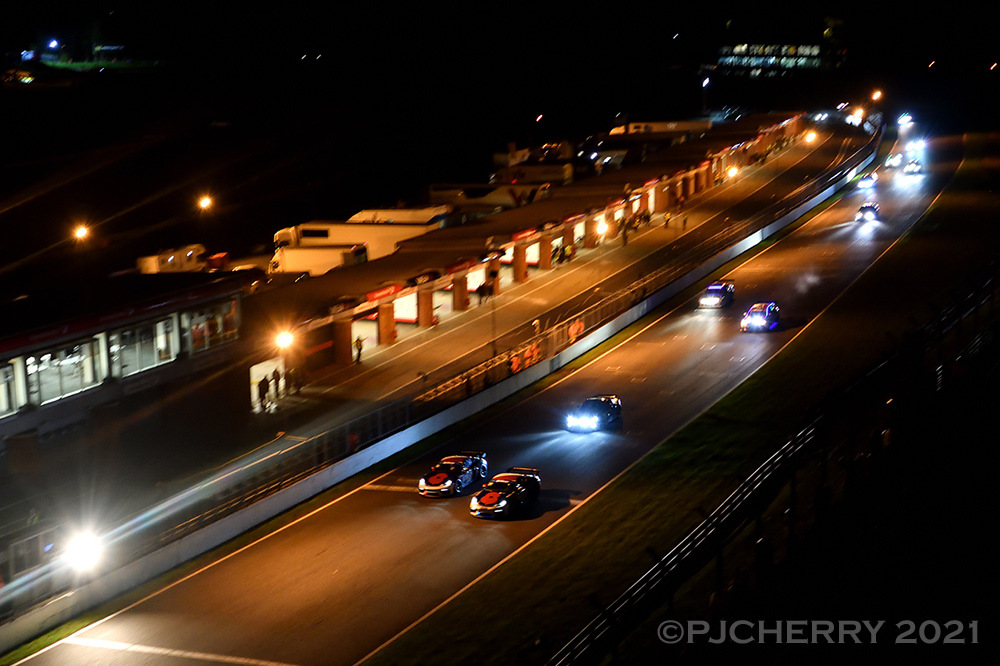 Ian Humphries and Benji Hetherington, in the Valluga Racing Porsche 718, claimed victory in the Saturday evening Into the Night race. The two Endurance-spec Valluga Porsches, with Carl Cavers and Sean Doyle in the team’s other car, had signalled notice of intent in qualifying, locking out the front row of the grid, and at the rolling start it was polesitter Cavers who took the lead, with Hetherington behind, followed by Eric Boulton’s Team Hard Ginetta G55 and Steve Rothery’s Peugeot 308. Bryan Bransom had started Jas Sapra’s BMW M3 from the pit lane, but any attempt to cut through the pack was thwarted when a sheared wishbone threw the E46 right to the top of the grass bank at the exit to Graham Hill Bend on the opening lap, causing the immediate deployment of the Safety Car.

It wasn’t good news for leader Cavers either – an infringement of the starting procedure had earned him a stop/go penalty, which was taken immediately after the two-lap caution was lifted; once the vanguard, now the guards van, and with team mate Hetherington now leading, he had some work to do. This was made slightly easier by the calling of the Safety Car again just a few minutes later; Sam Alpass, in the Geoff Steel BMW M3 that had laid dormant for the best part of two years, had come to a halt at the exit to Surtees. Ironically, an eventual ctrl/alt/delete action got the BMW on its way again, though it would be six laps until the field went green again, and confusion over the re-start saw Rothery attract a drive-through penalty, which he would have to take in addition to his mandatory pit stop, for which the window was just about to open. A misunderstanding at the pit entry saw a clash between the BMW of Dave Cox and Anton Spires’ Renault Clio, the smaller car catching front end damage which would end its race.

Niall Bradley had turned up with his BMW M3 just before qualifying, but squandered his second-row grid slot with a pit-lane start, and with a sensational cut through the pack, was well-placed to take the lead for a few laps during the pit stop sequence, and once all the stops – and any associated penalties – had been taken, Ian Humphries retained the lead held earlier by Benji Hetherington, while Niall Bradley was now on a charge, the BMW taking Eric Boulton’s Ginetta G55 for second, with a 16-second gap to the leader. Coming up fast though, was Sean Doyle, in the Porsche started by Cavers; posting metronomic 50-second laps, Boulton was caught and passed down the inside at Paddock, and the Irishman set off in pursuit of fellow countryman Bradley’s second place. The gap between the two was down to two seconds when the Safety Car appeared once more, this time for recovery of Kurt Leimer’s Ginetta G40, which was beached at Clearways, with just 10 minutes of the race left to run. With the field now bunched-up, and just a few seconds covering the top three, a Valluga one-two, even a Cavers/Doyle win, was a realistic proposition, and once the green lights were shown, Doyle made an ambitious but clean lunge at Bradley down the inside a Paddock. It didn’t come off though – the Porsche straightlined into the gravel, nerfing the Armco, and with less than five minutes to go, the officials decided they’d seen enough, and red-flagged the race.

So, with the result taken back to the previous lap, the Valluga pairing of Humphries / Hetherington took the win, and the Endurance category victory, ahead of Class 1 newcomer Niall Bradley’s BMW M3, with Cavers/Doyle, and lone driver Eric Boulton completing the Endurance podium, despite a late-race pit visit for the Team Hard Ginetta. Steve Rothery brought his Peugeot home second in Class 1, with the final podium place taken by Dave Cox and George Haynes in the WEC Motorsport BMW M3, while early-race issues put Sam Alpass down the order in his BMW M3. An impressive seventh overall, and taking the Class 3 win was James Alford in the Saxon-run VW Golf, a good maiden outing from class pole which augurs well for the aspiring 2022 Trophy contender, who said after the race "the car was flawless, I had a selection of big saves and one large off that caused some damage but managed to get the car home". Steven Chandler and Ben Clayden did well to bring the Chandler Motorsport Golf home second in class, despite still being mysteriously down on power, with Kurt Leimer nicking a pot, and more importantly for him, a signature, for third Class 3 place in the Reflex Ginetta G40. The Jamsport Ford Fiesta, beautifully festooned with decorative lights, put on a good show, with team boss Jamie Going and young gun Marlo Cordell comfortably claiming the Class 2 win, ahead of the JW Bird-run Scirocco of Paul Goodlad, which spent a fair while in the pits with a starter motor issue.