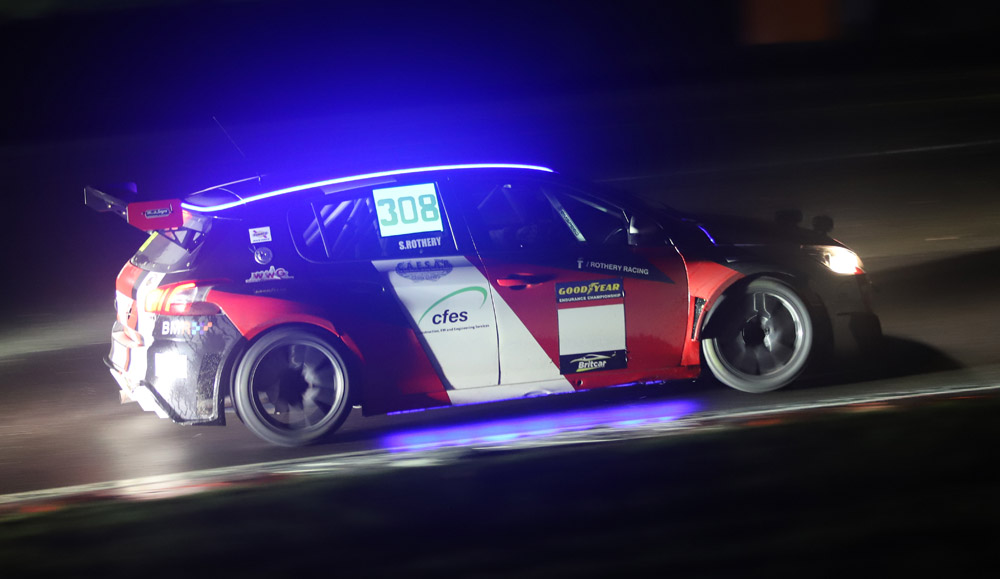 Local hero Steve Rothery took his Peugeot 308 to a popular win in Sunday evening’s race after penalties curtailed some of the front running contenders. That’s not to say he lucked-in though, the Dartford driver was always in the picture from the get-go of the 50-minute race.

Afternoon drizzle had ensured a wet track for the after-dark race, and with no wet tyres for his BMW, last-minute entrant Niall Bradley struggled to maintain his front-row grid position at the rolling start, leaving Ian Humphries to take the remaining Valluga Porsche into the lead, followed by Rothery, and, by the end of the opening lap, Bryan Bransom in the repaired Sapra BMW M3, trading positions with the fast-starting Jamie Going in the Jamsport Fiesta. Kurt Leimer had a quick spin in the Reflex Ginetta G40 at Graham Hill, but it was he bigger G55 of Eric Boulton, in the gravel at Clearways, which caused the early intervention of the Safety Car. Once the caution was lifted, Going’s progress in the Fiesta was halted by a drive-through penalty for breaching the grid formation procedure, and while the Jamsport boss mounted a recovery drive, he was penalised again for an irregularity in the original drive-through.

Rothery and Bransom had been trading almost identical lap times, a second apart, but on lap 21 the BMW dived down the inside of the Peugeot at Paddock to take second place, though only for a few laps, as the pit window opened and the grey E46 was in, to give Jas Sapra his first racing laps of the weekend. Jas was maybe a little too eager to get out there; a two-second stop /go penalty for a pit stop infringement was later compounded by a more draconian 22-second stop/go for an infringement during the first stop/go, denying a potential challenge for the Class T1 win.

The Valluga Cayman had set a comfortable lead which it maintained through the pit stop sequence, and with Carl Cavers relieving Ian Humphries, and once the field settled back into a rhythm, there was a 22-secnd buffer back to Rothery’s Peugeot, which had over half a minute advantage over Sapra’s BMW, at that point yet to be awarded its second penalty. And that penalty came at the same time as Caver’s leading Porsche had also attracted one, a three-second stop/go, so with nine minutes of the race left, Steve Rothery had the threat from behind dismissed, and the way ahead clear. Rothery didn’t let up though, maintaining his race-long pace, and the recovering Cavers was nicking tenths rather than biting chunks out of the Peugeot’s lead as the clock ran down, the gap being just under six seconds when the flag fell for a fitting victory for the local man. 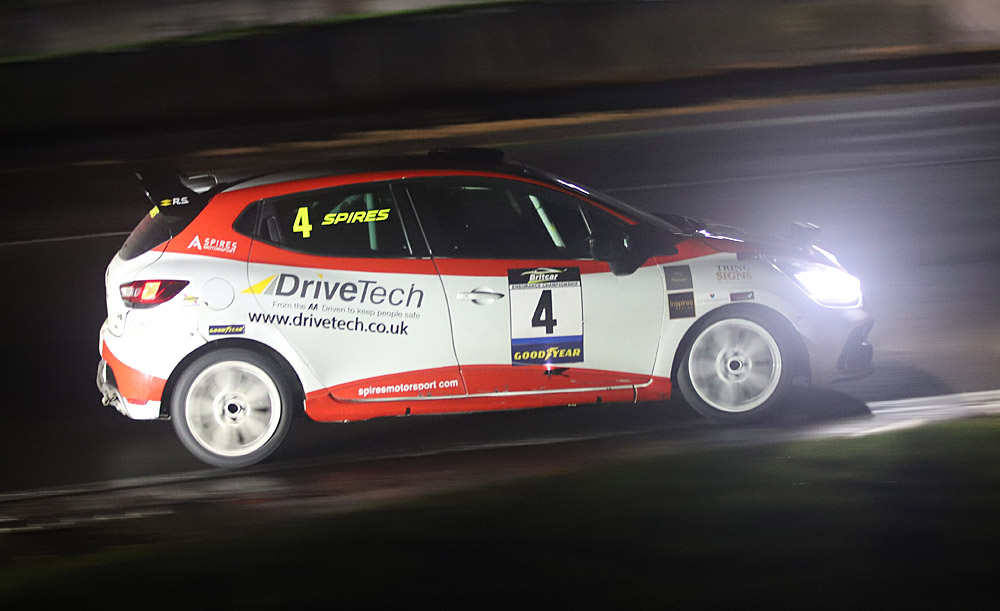 A sensational third overall was Anton Spires in the Spires Motorsport Renault Clio, redemption after the issues on Saturday, and a tribute to the hard work the team put in to repair the car in time. Anton had never put a foot wrong all weekend, and was rewarded with not only the Class T3 win, but the prestigious Driver of the Weekend award as well.

The Sapra/Bransom BMW M3 came home fourth, a lap ahead of the similar machine of Dave and Michael Cox, which had more or less held position throughout the race, these completing the Class T1 podium, while Niall Bradley, with only the standard Direzza rubber on his BMW, continued gamely to eighth place overall. Marlo Cordell took the Jamsport Fiesta over from Jamie Going, and they clinched the Class T2 victory, ahead of Class T3 runners-up Steven Chandler and Ben Clayden, despite the family-run team’s VW Golf continuing to be down on power, with the class podium completed by James Alford, who switched from the standard Direzza to full wets mid-race, and Kurt Leimer finishing just off the podium in the Reflex Ginetta G40. Eric Boulton lost a good few laps in the Team HARD Ginetta G55 after the first lap trip into the gravel, but still claimed the Class E4 runner-up trophy, and Paul Goodlad did the same in Class T2 in the JW Bird Scirocco, run under the Limb Torn Off Racing banner, which graphically describes the driver’s physical condition.