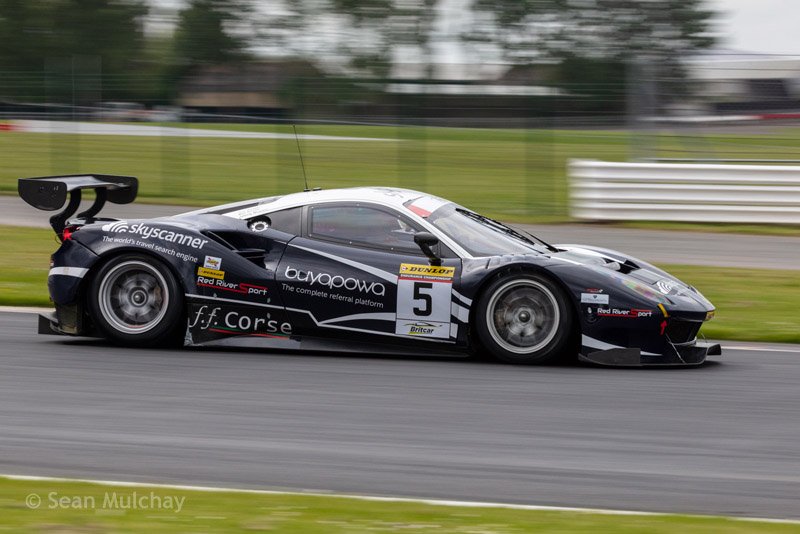 Close racing and a close finish by the fastest protagonists in both categories on the fast sweeps and twisty bits of the Silverstone GP configuration.

Richard Neary really had the bit between his teeth at the start of the joint 50-minute opener, starting a disgruntled fourth on the grid after picking up an early slow puncture and jettisoning his qualifying attempt in the Team Abba Mercedes GT3 after just three laps. He was in no mood for nonsense, and he got none from rapid Ross Wylie in the FF Corse Ferrari 458 GT3, the pair dispensing with Ivor Dunbar’s pole-sitting Ferrari 488 and embarking on what Wylie later described as "the best race I’ve had in a long time". The pair traded the lead, nose-to-tail, side-by-side, ebbing and flowing through the traffic of the packed 34-car field, right up until the they both pitted after nearly 30 minutes of hard racing, Wylie handing over the 458 to David Mason to take the final stint. The Ferrari rejoined still ahead of the Mercedes, though it was less than a lap later when Neary re-took the lead again, but Ivor Dunbar had already handed the Ferrari 488 to Johnny Mowlem, who was taking no prisoners in pursuit of the lead. Neary was a tough customer though, the Mercedes giving no quarter, and it wasn’t until the final lap of the race that the sportscar pro made it stick, the Endurance-category 488 crossing the line with less than a second over the Sprint-winning Mercedes.

Behind this lead battle there were some stunning performances and mixed fortunes; a spin for lone-driver Kevin Riley’s Mosler dropped him down the order, and Ben Sharich lost a little ground acclimatising in the continually-developing MacG Racing Taranis, though Jonny MacGregor’s confidence in his self-built machine earned him a well-deserved third place at the flag, ahead of the expected strong showing by Michael Igoe and Adam Wilcox in the JMH Porsche 911, both cars getting ahead of David Mason’s Ferrari 458, which finished just in front of stablemate John Seale’s 488 – "another lap and I would have done it" rued Seale afterwards. The stunning Volvo S60 Silhouette of Sam Alpass and Travis drummer Neil Primrose, a former Spa 24hrs winning car rescued from the museum near to the track, went well and sounded glorious in its rejuvenated racing career, coming home seventh overall, while the Saker RAPX qualified and raced in the top five in the hands of historically-connected David Brise, eventually finishing ninth with Alan Pubrick at the wheel.

Class 2 was predominantly a Sprint category, and finishing just off the class off the podium was invitee Lucky Khera after a strong lone performance in his first Britcar race in a Butler Motorsport Ginetta G55 Supercup, while team mate Lee Frost was sadly a retiree. Peter Challis was a midfield finisher in his Porsche 997 Cup, while the similar car of Dave Benett and Marcus Fothergill was surprisingly down the order, as was Ian Heward’s 911 RSR, shared with teenager Oliver Willmott.

Black Mamba’s Ginetta G55s proved dominant in Class 3 last time out at Rockingham, giving Team Hard something to think about, and this time it was different; it could have been the track configuration, conditions, preparation, drivers’ mindset, or just luck, but Team Hard put in the more convincing performance at Silverstone. Tom Barley and Simon Rudd took the Class 3 honours, despite attracting a 30-second penalty for a pit-stop infringement, leaving them just over five seconds ahead of Black Mamba’s Jayde Kruger and Chris Papageorgiou, with the final podium spot taken by the Track Focused KTM X-Bow coupe of Mike McCollum and Sean Cooper. In other Mamba/Hard news, Adam Hatfield and returnee Callum Hawkins-Row, subbing for Darron Lewis, finished just off the podium in the Team Hard G55, while Black Mamba lone-driver Luke Williams had a fraught race, suffering suspension damage and a driveshaft failure. Last year’s Sprint champions, Rick and Brad Nevinson, returned for an invitational shot at the Endurance format, in the Track Focused Porsche Cayman, and were the fourth finisher in that class, ahead of Australian entrepeneur Mal Sandford, who gamely tackled the race alone in the EDF Motorsport Aston Martin Vantage, building his track time towards the AM Le Mans Festival next month.

With their best qualifying lap times less than a tenth of a second different, it appeared that the Tockwith Ginetta G50 of Sarah Moore/Matt Greenwood and the SEAT Cupra of Stewart Lines and BTCC ace Adam Morgan had signed-up to be each-other’s nemesis for the day. Moore led Morgan for Class 4 honours in the early stages, though it changed several times as the Ginetta struggled for grip, and the two cars finished 10 seconds apart at the flag, Greenwood leading Lines to take the Endurance Class 4 win. Third in class was Alyn James, in the new-shape Synchro Honda Civic Type R, struggling a little in the new class structure, while Britcar’s own Chris Valentine, sharing the Newbridge Porsche Cayman with absolute beginner Nick Scott-Dickeson, beat his own personal best times on the way to fourth in class.

In the Sprint category Class 4, it was famous victory for old hand John Clonis ("the sign-on staff were surprised my licence number had so few digits") and Chris Bentley in their SEAT Leon, ahead of the Neil Garnham/Rob Young BMW M3, which had a fraught time, including a 30-second pit-stop penalty; missing qualifying due to wheel issues, Garnham embarked on a spirited drive from the back of the grid, scything through the pack, though dropping back due to a couple of spins, as grip issues prevailed. The third podium spot was taken by the father and son duo of Robert and Alex Day, in the former Rob Austin BTCC Audi A4 affectionately known as Sherman.

Class 5 were all Sprinters; Tim Docker once again took his Maximum-run VW Scirocco to the class win, with second place going to Tockwith duo Rob Baker and Lucas Nanetti, who found the replacement car for their Smart 4/4, an Australian-inspired Holden V8, a bit of a handful, with the final podium spot going to Britcar debutante Andy Napier, a terrific effort considering the little Lotus Elise hadn’t turned a wheel in anger before the meeting, after a considerable rebuild, and encountered spark plug and alternator problems during free practice.

And lastly, the bad luck stories. The Jon Watt/Kristian Prosser BMW M3, run by Moss Motorsport, had a coming together in qualifying with the Ginetta G55 of GRDC graduate David Holloway. The BMW didn’t get out at all for this race, and the Ginetta was only fixed in time to put in a few installation laps before the flag fell, and to compound Moss Motorsport’s problems, the BMW 1M shared by team boss Mike Moss and Tom Howard suffered electrical issues and was an early retirement.