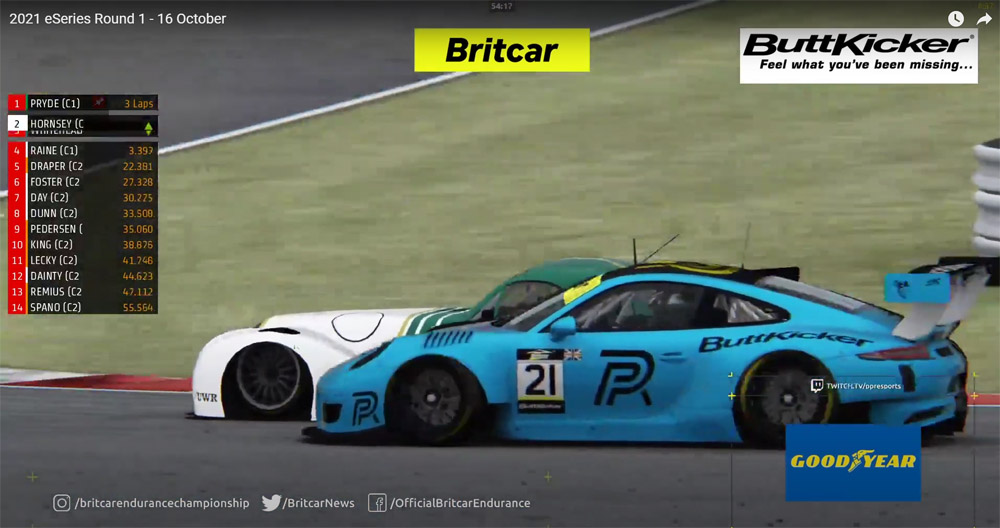 Britcar’s E-series returns for 2021 with a new look thanks to PPR Esports and and new title sponser, ButtKicker. With five events planned for October and November, it was Donnington Park GP that started the season off with Luke Whitehead winning out a close class one battle and class two honours going to Tony Draper with an impressive lights to flag class win.

Pole was taken by David Hornsey in his class one Morgan, ahead of both PPR Porsches. Cody Pryde out qualified his teammate Luke Whitehead. Isaac Raine was fourth in his Morgan and rounded out class one; with three tenths separating the entire class.

The races will be an hour in length and have a pit window of 30-minutes between 45 and 15 minutes left of the race; in which drivers have to make a mandatory tyre change. So track positon and knowing when to push will be important for all drivers.

At the start of the race, it was Pryde that had the best start, passing Hornsey into Redgate. Whitehead behind, then applied the pressure on the Morgan driver and passed him at the final corner (Goddards) four laps in. In class two, Draper maintained his lead at the front, while Lecky received a drive-thru for an infringement, which put him at the back of the pack. Though Lecky was immediately on a charge and was up four places in five laps.

Remius and King had a moment through the top of the Craner Curves, as Remius attempted an overtake but was unsuccessful and spun both himself and King into the infield. This benefited both Spano, who gained two places and the class one runners who lapped the pair with no trouble. Soon after this moment, Lecky, who had been chasing down Pedersen, put a daring move down the inside at Starkey’s Bridge and passed the Maserati around the outside of McLean’s moving up to ninth overall. Lecky then set his sights on Dunn, catching the Camero and placing pressure on him as the class one cars lapped them both. This combination of pressure and the lapping cars forced a mistake from Dunn, who went wide out of McLean’s giving Lecky the opportunity to pass.

At the front of the race in class one, the two Porsches had the pace in the opening stint as Pryde led his teammate Whitehead. The two Morgan’s behind swapped places when Hornsey ran wide out of McLean’s; possibly showing the wear on the tyres.

In class two Draper had started lapping the back markers, showing the phenomenal pace he had in his Ginetta. He led Foster and Lecky, the latter of which had passed Day into the Melbourne Hairpin. Such was the pace of Draper that the only time he was passed was when Whitehead pitted from the lead of the race and came out behind the class two leader. Draper had amounted a massive gap to Foster and when he pitted from the lead of class two he came out well ahead of Foster.

During the pit window, Pryde nearly made the undercut work on Whitehead but when he pulled into his pit box he overshot and lost vital seconds having to reverse. This meant that when he emerged from the pit, he was seconds behind his teammate, with Raine just behind and Hornsey yet to pit. Hornsey stayed out longer than the rest looking to benefit from fresher tyres late in the race.

After the stops, Raine was all over the back of Pryde with Hornsey just shy of the pair of them. This all came to blows down at the Old Hairpin as Raine pulled out on Pryde but spun half-spun his Morgan around as the pair came very close. Hornsey looked to capitalise on this but was partialy collected by the errant Raine and had to sit back behind Pryde. Though it was only a few laps later that Hornsey managed to pass Pryde, making the move stick down into the Old Hairpin, but in doing so accidentally punted off the Cupra of Day who lost class two fourth to Dunn.

Hornsey then made grounds into Whitehead’s lead but was unnsuccesful as the Porsche driver picked up his own pace and held the lead to the chequared flag to win the opening round. Hornsey second, Pryde in third and Raine fourth. In class two, Draper won comfortably from Foster with third going to Lecky after being last on lap one. Further down the order, Spano passed Dainty at the final corner to get eleventh place.

After the race Whitehead said it was "a pleasure to play" while Hornsey said he was "surprised to be second" and his thoughts on the Raine/Pryde incident were that he "got a bit greedy passing the Porsche when Isaac span".

Tony Draper, despite his dominance said the the "Hard tyres [were] pretty tricky on the Ginetta".

The series will return on the 30th of October at Silverstone.