Croft Race 2: VR’s Young Guns Go For It in Endurance, Redemption for Smith in Trophy 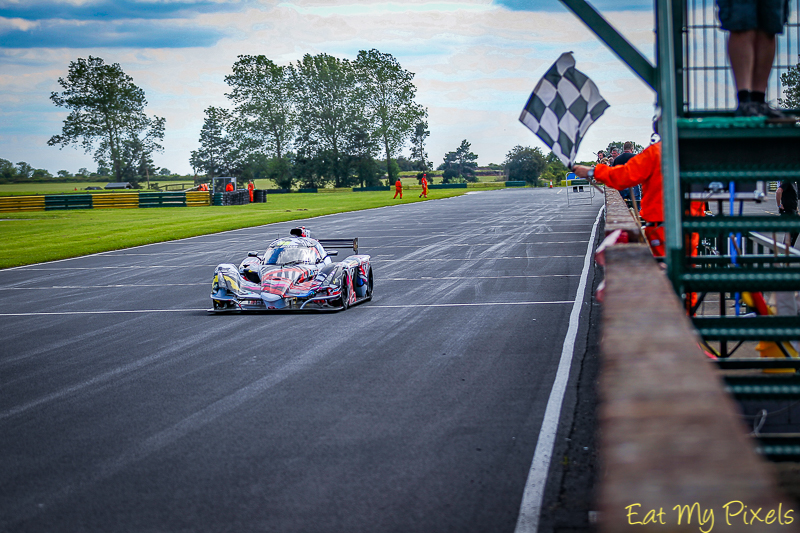 The VR Motorsport team had burnt the midnight oil, and enlisted some outside help, to get their three Praga’s on the grid for Race 2 on Sunday afternoon; each car had a new fuel pump fitted, a cracked inlet manifold was welded-up, and the blue machine had a replacement drive shaft. In Trophy, Richard Evans had sorted the issues in his Ginetta G40 that caused him to miss Saturday’s race, though the Race 1-winning Smart ForFour was relegated to the back of the grid, as today’s lone-driver Rob Baker hadn’t got enough qualifying laps in.

Steve Burgess, starting the Saturday race-winning Radical from pole, was into an immediate lead once the red lights went out for the rolling start, and the Class 1 Pragas made fast starts from their out-of-kilter grid places, as did, notably, Marcus Fothergill, slicing his Porsche through the Trophy cars like a hot knife through butter – 19th to 11th on the first lap. And he wasn’t the only one – Burgess’s Radical had just a 0.145second gap over Danny Harrison’s Praga as they crossed the line for the first time, while team mate Jack Fabby, facing a bit more serious traffic, climbed from 16th to 10th. By lap two, Harrison was in the lead, and by lap four, Fabby was second, 12 seconds adrift. Behind them, Burgess had a gap between himself and a four-car squabble between Paul Bailey, Sean Doyle, Martyn Compton and Martin Byford. Ben Sharich ran alone in the Taranis, and Marcus Fothergill had moved up as far as he realistically could, behind Will Powell’s Motus One Ginetta G55. In Trophy, Barry McMahon’s Alfa and Brad Kaylor’s SEAT were disputing the lead, before being split up by Oliver Smith’s BMW M3. Sadly, just 10 laps in, Nathan Wells’ BMW GTR was pitbound, and straight into the garage to retire. 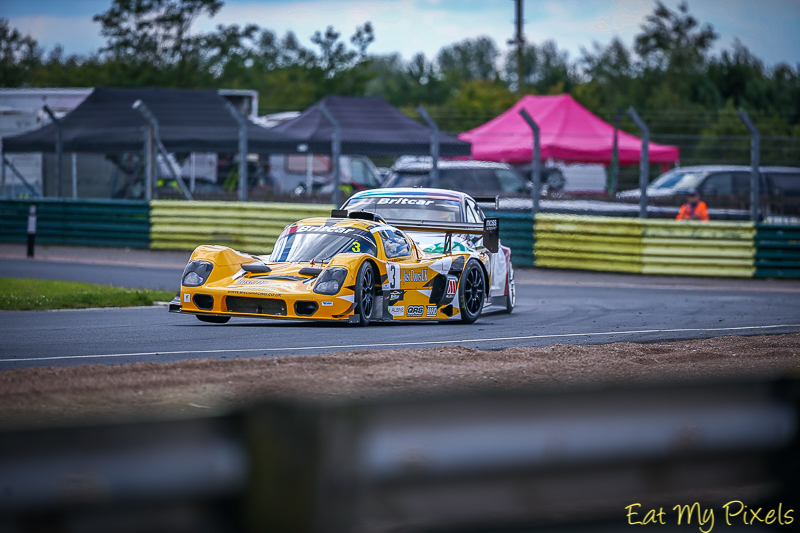 There was a fair bit of place-swapping in the quarrelling quartet – Compton’s Praga and Byford’s SEAT traded places more than once, then Sharich dropped a few places after kicking up the dust on the outside of Clervaux, an incident which went unexplained, and rumours of a tap from behind for the Taranis unconfirmed, as Sharich related; "I’m not sure, I might have done, but I couldn’t tell as it was a very bumpy section of track. It did seem strange as I wasn’t going through there any differently from normal, but I can’t be 100% certain".

Will Powell’s race came to an abrupt end shortly after, at Clervaux again, the Ginetta G55 parked on the outside of the corner, causing the Safety Car to be scrambled. With 32 minutes left to run, it was a little early for most to take their mandatory pit stop, but the window was open, and a gift horse can’t be looked in the mouth, so the majority of the field took the opportunity. All except Mike Hart’s MX5, and Fothergill’s Porsche that is, the latter no doubt relishing holding second place and the Class 3 lead for a short while.

Danny Harrison had kept the lead all through the pit stop and Safety Car period, and once things settled down again, he had a substantial lead over the blue VR Praga, which Garry Townsend had taken over from Jack Fabby. The Radical maintained third place, with Ben Dimmack now driving, though Ross Wylie was on one of his reeling-on missions, the best part of a lap adrift in the Ferrari started by Bailey, but closing down rapidly. Again, the media calculator was put to work, and this time it looked achievable, maybe, just within the time left. And there was action in the Trophy category too – leader Barry McMahon was being chased down by Oliver Smith.

Marcus Fothergill stayed out to the bitter end, the Porsche chugging down the pit lane on the limiter just as the officials were putting the latch on the pit stop window. Dave Benett, now recovered from a bout of Covid-19, took over, then Warren McKinlay brought the VR Motorsport R1 into the pits – he had been running fifth, consolidating the good work by Martyn Compton in the opening stint – but that was it, sadly, the team reporting that it was a faulty throttle sensor, and they had no replacement part. Nevertheless, this had been a great weekend for the army veterans, who had made the move up from GT4 seemingly with ease, and were clearly enjoying the potential of their new team.

With five minutes to go, Wylie was on Dimmack’s tail, even getting slightly ahead as they crossed the start line, but Dimmack held on, until dramatically going off at Clervaux on what would be the penultimate lap, leaving Wylie to push for a potential second place with the blue Praga now in his sight. 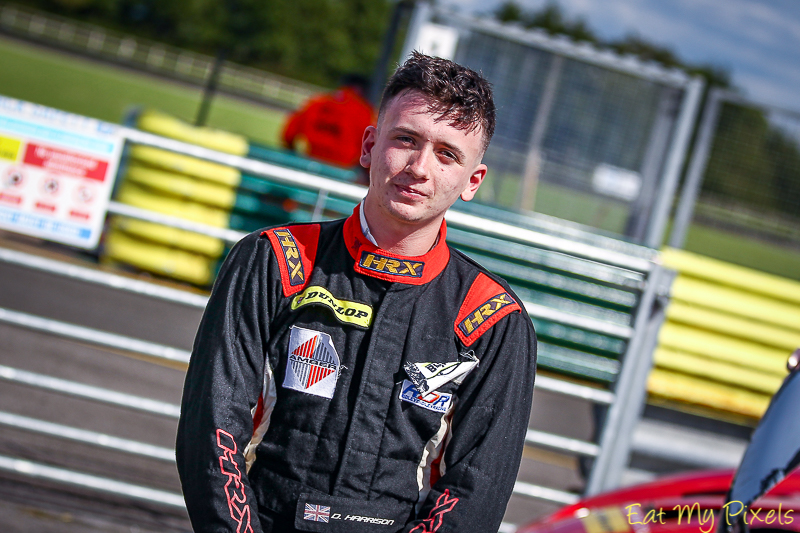 So it all came good for the VR Motorsport turbocharged Pragas, after a fraught Saturday. Harrison, Fabby and Townsend never put a foot wrong, though Ross Wylie’s late-race push brought him to just half a second behind Garry Townsend’s second-placed blue car when the flag fell, placing the Ferrari third overall, and winning Class 2, with erstwhile class leaders Dimmack and Burgess sadly posting a DNF.

Another late-race push came from Jonny MacGregor, who used the grunt of the Taranis to claim fourth place, and the final podium spot in Class 1, ahead of Class 4 victors Nicole Drought and Sean Doyle in the Vallluga/CJJ Porsche Cayman 718, a successful weekend for the Irish pairing in a UK championship. Chris Hart’s talent is well known in Britcar, he led races last year in a Saker, and he made considerable progress in the FNS Ginetta G55 he took over from fellow Fun Cup regular Stephen Walton, once again bagging the Class 3 win, and sixth overall, ahead of Ash Woodman, who had relieved Martin Byford in the EDF-run SEAT, claiming the Class 4 runner-up spot, while that late pit stop by Marcus Fothergill may have hampered the chances of the new Bespoke Cars Porsche 911, and Dave Benett brought it home second in Class 3.

There was some action in the Trophy category as the race came to a close; Oliver Smith’s BMW had been closing down Barry McMahon’s Alfa Romeo for the overall lead, and took the top spot around 10 minutes from the flag, these two posting the Class 6 and Class 5 wins respectively. The Boxster of Anthony Hutchins, and Rob Baker’s Smart ForFour completed the Class 5 podium, while in Class 6, Brad Kaylor had always been there or thereabouts in his Saxon Motorsport SEAT, and took second place, while behind him, there was a fraught battle between Charlotte Birch and Bill Forbes; with co-driver Adriano Medeiros away on other business, Charlotte gamely tackled the race as a lone driver in the Vinna Sport Ginetta G40, and the race-long dispute for position intensified after the mandatory pit stops- Charlotte seized third in class with around nine minutes of the race left, but Forbes’ G40 never lost touch, and a last-lap push saw him just off the podium by 0.319 seconds, a great performance by both drivers. Crissy Palmer, in the Paul Sheard MX5, was fifth in class, and sadly early frontrunner Richard Evans retired his G40 eight laps in, while the MX5 of Mike Hart and Chris Clarke also posted a retirement after 26 laps.