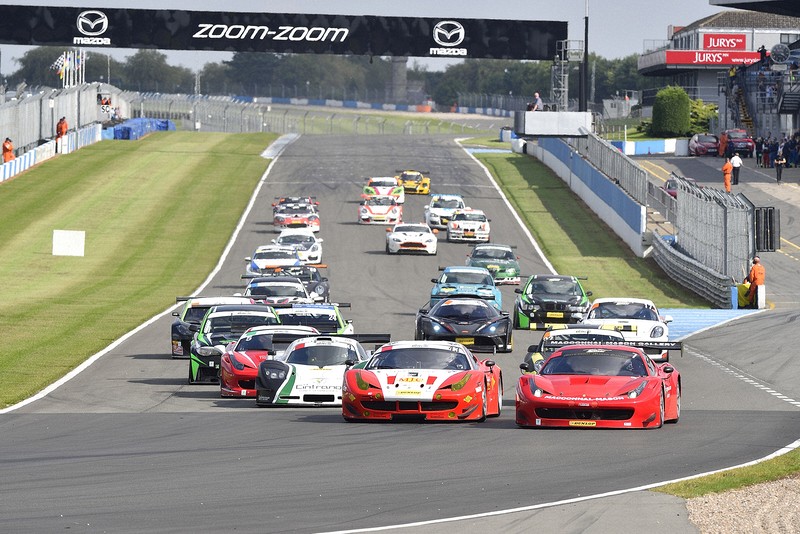 It was a another win for Manuel Cintrano and Javier Morcillo in the 17-year old Mosler in the two-hour race, and this time the pit stop success penalties had less of an effect, though cruel luck robbed several front runners of success, and there were some stirring performances that brought back-row starters to the front of the race.

The grid for the second race was set by the result of the first, and with several significant runners missing or retiring from that earlier encounter, the rear of the grid had a fair share of fast machines that would need to cut their way through the pack. The clutch on the Papageorgiou/Kruger Black Mamba Racing Ginetta G55 had been fixed, as had the gearbox on the similar Team Hard machine of Dudley/Hawkins-Row, though the overheating on the Tockwith G50 of Moore/Hall was borderline, and the fix for the water pipe on the Porsche of Katie Milner and Ollie Willmott was tenuous. Approaching the race with an amount of confidence, though, was Jonny McGregor: after the demise of the Arrinara, the MacG Racing team had dashed to their base nearby and dusted off the Taranis, which was virtually race-ready, and Jonny joined at the back of the grid.

It was Calum Lockie, again, that blasted away from the second row in the FF Corse Ferrari 458, and Mark Cunningham’s post-race comment of "Plan A – follow Calum" looked in retrospect to be opportunism rather than pre-determined; the Porsche did sensationally make the best use of a gap behind the Ferrari to pass Cintrano’s pole-sitting Mosler and Bon Grimes’ 458, even challenging Gamski’s Ferrari through Craners before the more powerful machines found their way back past. Mark did well to make a fast start, as there was mayhem at Redgate, a midfield spinner causing some to take avoiding action that led to more confusion. Katie Milner was straight into the pits with damage to the Porsche, ending a weekend that never really got started, and the Ginetta of Tom Barley came in for front-end repairs that would take 10 laps to effect; while still running, but with a large chunk of rear valance missing, was Adriano Medeiros’s Eureka BMW M3.

Grimes took second from Gamski, and Jonny MacGregor had cut through the pack in the Taranis, hitching onto the Class 1/2 runners after passing the Cunningham Porsche, which headed the rest of the field. Gamski was slipping back, allowing a punchy Mark Cunningham past, and what looked like a fairly innocuous spin for Dave Benett’s Porsche at the chicane ended with the car beached in the gravel in an attempt to regain the track, so at 19 laps and with 20 minutes on the board, the Safety Car was deployed. This marked the 40% point of the 50-minute Sprint race, and an opportunity for the Endurance runners to get a cheap 25 litres of fuel, so a hectic dash for the pits was made. No driver changes for the Endurance cars, just fuel, though sprinter Calum Lockie took the driver-change opportunity a little earlier than usual, having built a 45-second buffer over the rest of the field and several laps over his nearest sprint rival, Marcus Clutton’s Porsche Cayman. 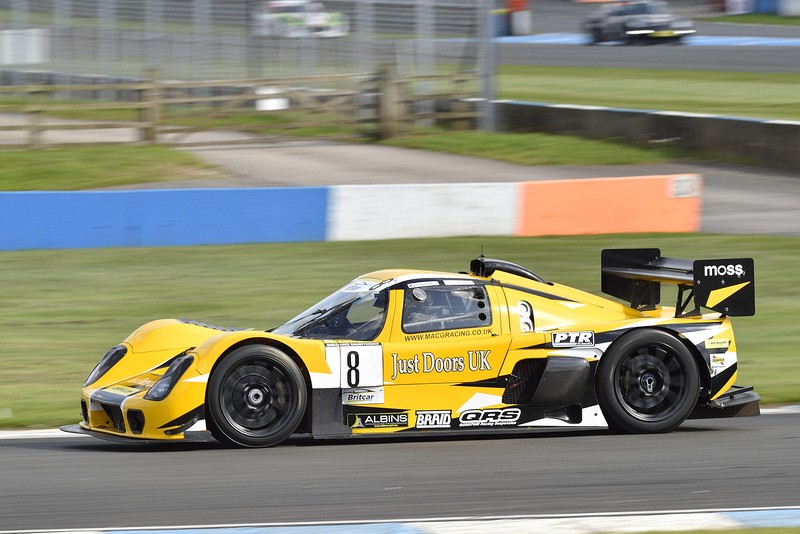 Staying out, though, were Jonny MacGregor and Witt Gamski, the yellow Taranis now leading after starting from the very back of the grid – once in the guards van, now in the vanguard.

Gamski, though, hit trouble around the 30-minute mark, the Ferrari ending up in the gravel at McLeans; "I was overtaking the Ginetta as he opened the door and I got past, then suddenly I was sent off. I can only assume it was the same car which bashed into me. We had to ease off as the car’s temperature was running high, although the engine didn’t show any signs of overheating, the gauges and engine alarm where showing too hot, but we think it was down to the sensors now. This just wasn’t our day" explained Witt. The Ferrari was recovered and made it back to the pits, where after a check over, Ross Wylie rejoined, and bagged fastest lap, finishing the race 15 laps down but claiming the final Class 1 podium place and a small but important haul of points.

Maybe that Ginetta was Tommy Knight’s #285 car? Knight brought it in for an unplanned stop shortly afterwards, a broken driveshaft was diagnosed and Team Hard set about replacing the damaged component. The Tockwith G50 came to steamy end on the Starkeys Bridge section of the circuit, just before the leading Mosler came in for a driver change, and the Sprint runners finished their 50-minute race. David Mason had little to worry about with the strong lead that Lockie had handed to him, and claimed the Sprint win in the FF Corse Ferrari 458 GT3, two laps in front of Marcus Clutton’s Cayman (clinching Class 3), Sam Alpass in his BMW M3 (Class 4 victor) and Barry McMahon, taking Class 5 honours in his Alfa 156. Runners-up in Class 3 were Marcus Fothergill/Dave Benett in the Bespoke Cars Porsche, and Roland Hopkins and Matt Sleigh were second in Class 5. Many of the Sprint runners were caught in some way in the first-corner melee, though Adam Hatfield’s late retirement in the VW Passat was unrelated.

The Safety Car made another appearance – to allow the Tockwith Ginetta to be placed out of harm’s way – and being just before the halfway point of the two-hour race, was a good time to make those mandatory pit stops. No stop for MacGregor, though, he was sticking to a plan, coming in just one lap after the short caution period was lifted, leaving Bon Grimes in the Class 2 Ferrari, to take the lead. A short-lived lead, albeit, as he too pitted to let Charlie Hollings take over, and, not for the first time this season, we had the Cunningham Porsche at the front of the field, now with Peter Cunningham in the driving seat. This, though, was probably tenuous; with just over 45 minutes to go, the Porsche had 19 seconds advantage over the Taranis, which itself had Javier Morcillo’s rapidly advancing Mosler to contend with. Then, a lap adrift, the Adam/Moss BMW 1M, having a great run, ahead of the McCollum/Cooper X-Bow, and the best of the Ginettas, this time the Angus Dudley/Callum Hawkins-Row car, which had kept out of trouble and enjoyed a sensational run from the back of the grid in the hands of the talented teenagers.

But all was not well with the leading Porsche, and it was soon in the gravel at Redgate, the victim of broken front suspension marking the end of what could have been at least a class win, and possibly an overall podium.

As it was, MacGregor had no answer for Morcillo, and the Mosler ploughed round to take the flag, nearly 50 seconds ahead of the Taranis. Charlie Hollings was safe in third, claiming Class 2 honours a lap down from the leading pair, but behind that was a race that wasn’t quite over yet.

Mike Moss was up for a repeat of the Class 3 win of Race 1 in the unique BMW 1M started by Scot Adam, but slowed considerably and toured round for the remainder of the race, stuck in fifth gear. "He was trying to find a gear, found fifth, and it stuck there – trouble is, we don’t use fifth at this circuit at all" chimed the Woodrow back-up team for Moss Motorsport, Ed and Ash, in unison.
So coming to the fore in Class 3 now was Callum Hawkins-Row in the best of the three Team Hard Ginettas, from the back of the grid and the only one in the team not to hit problems; behind him was Jayde Kruger’s similar machine, after an earlier stint by Chris Papageorgiou. Both cars had missed the first race whilst being repaired, and both had cut through from the back rows. They finished in that order, with the touring Moss claiming third in class as time ran out for a pursuing Matty George in the Aston Martin – the Whitebridge team had played it by the book, ignoring the Safety Cars and pitting as planned after a confidence-boosted stint by Chris Murphy. It was looking good for the debuting closed-bodied KTM X-Bow, but a refuelling infringement during a late-race stop saw then awarded a drive-through penalty, dropping them to fifth in class and eighth overall, still a promising opening to their campaign for Mike McCollum and Sean Cooper. It was a bad day for the erstwhile class-leading Ginettas – Darron Lewis/Tom Knight were sixth in class, and Simon Rudd/Tom Barley eighth, both delayed by repairs, and split in the results by Latvian newcomer Gleb Stepanovs and experienced veteran Les Goble after a solid run in the Newbridge Porsche Cayman. 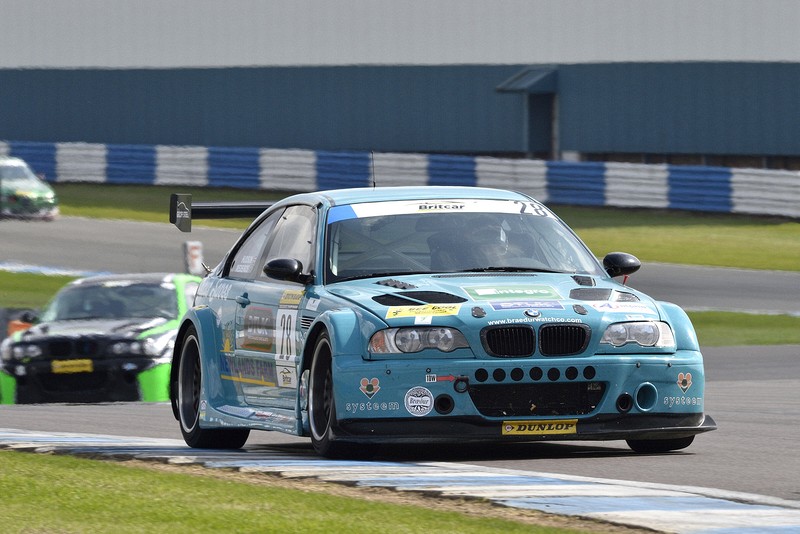 The earlier rear-end knock to the Eureka BMW M3 didn’t seem to have a major effect – Adriano Medeiros handed the pretty turquoise machine to Rob Hudson in a good place, and despite a spin and a bit of fatigue by Hudson late in the race, they took the Class 4 victory, and an impressive ninth overall. First-time racer James Crabtree was impressive too, assisting seasoned campaigner Colin Willmott to the Class 5 win in the BMW M3 E36.

This had not only been a raceday of supreme performances (Sunoco DoD to Jonny MacGregor, Britcar DoD to Callum Hawkins-Row), but also of levelling – race returnees scoring maximum points, and with the exception of the Bon Grimes Ferrari (which scores half-points due to no class competition), the earlier class leaders in the championship scoring badly. The pit-stop success penalties will be re-aligned (and levelled-out) for the next round at Oulton Park. We have passed the midpoint of the season, and the Championship has been turned on its head.