Racing CV: Alan got involved with motorsport after being persuaded to get his racing license after taking part in many track days. His first foray into the real world of racnig was on an arrive-and-drive basis in a Ginetta G20 before purchasing the Saker in 2015. Alan campaigned the car par-time in GT Cup before switching campaigns in 2017 and racing in Britcar. In 2018, the car was fully prepared by ALP Racing and competed in four rounds of Britcar, pulling of a dramatic climax to the season by winning the Brands Hatch ‘Into The Night’ Race outright. That win topped off the team’s most successful season with an overall hall of fifteen trophies. Alan finished off 2018 with a Driver Of The Weekend trophy and Rookie Of The Year at the Britcar annual awards.

Why did you choose to race with Britcar? Great atmosphere, well organised, fair competition amongst cars and drivers, friendly people running Britcar. 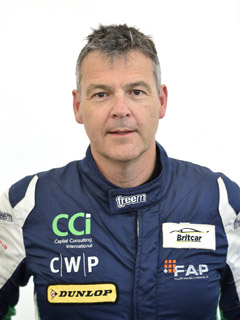