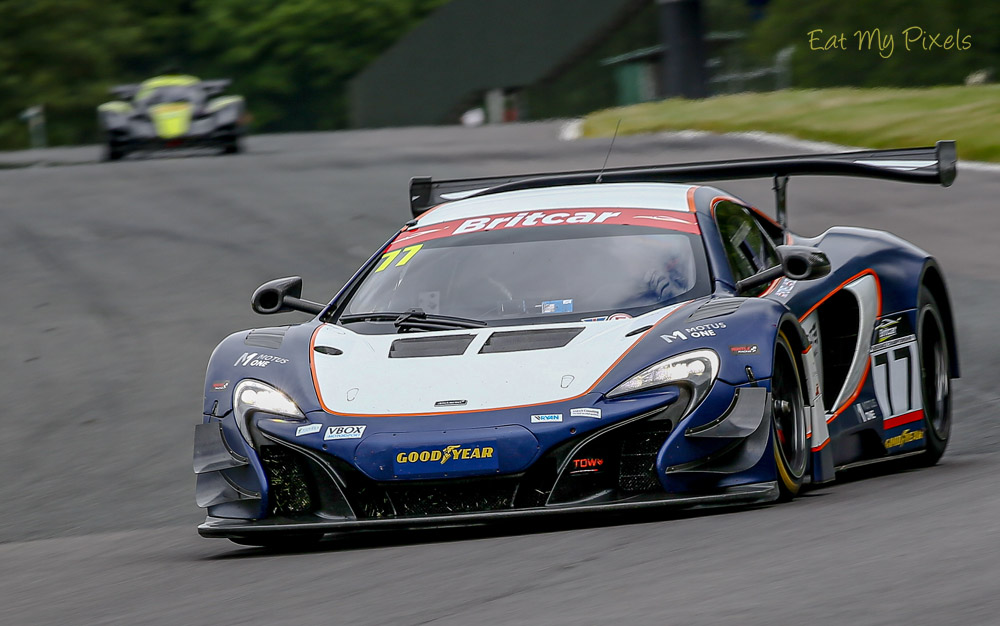 They have been consistent podium finishers so far this season, and on the Oulton Park Island configuration, the pairing of Dave Scaramanga and Will Powell took their first Endurance category win in the Motus One with Moorgate McLaren 650S, an impressive performance considering it was Scaramanga’s first visit to the challenging parkland track.

This was the first time too, that the Pragas lived up to the populist pre-season predictions that they would dominate the leading positions of the race, fittingly on the home circuit for the newly-opened Praga Race Centre, and with the circuit clearly favouring the light, aero machines, the whole contingent locked-out the first nine places on the grid, with the Richard Wells / Alex Kapadia car claiming pole, and after a fraught race, Jay Morton and Angus Fender taking the overall win.

But this report is all about the Endurance category, and with some of the early-season heavy-hitters absent from this round, it was down to the Motus One McLaren to take charge, and Powell’s best qualifying time was a full three seconds ahead of Johnny MagGregor’s MacG Racing Taranis, making its season debut, with an orderly Class 3, and 4 grouping behind. Sadly not making the grid was the Cupra TCR of Danny Krywji and returnee Nicole Drought after an off in qualifying, and the TCR machines of Tim Docker, Day/Foster and Beeson/Heler were relegated to the back of the grid when the men in serious trousers identified technical infringements. Further dramas ensued before the start, with seven cars, including three Pragas, and significantly, Mark Cunningham’s Porsche, failing to beat the pit exit closure to form up (a varying number of explanations were made), necessitating a pit lane start for them all.

It was MacGregor’s yellow Taranis that seized the lead of the Endurance runners at the rolling start, ahead of Scaramanga, taking the first stint in the McLaren, and Bobby Trundley’s Team BRIT Aston Martin was closely followed by Martin Byford’s Cupra, the pair of them stealing a march on Chris Goddard’s Ferrari and the Porsche of Dave Benett. MacGregor began extending his lead by three to four seconds a lap, but what of pit lane starter Mark Cunningham? We were denied one of his storming starts from mid-grid, but instead were treated to a courageous cut through the pack. With the Class 4 cars dispensed with, Goddard’s Ferrari and Benett’s Porsche were a bit harder work, but then he came to the battling Trundley and Byford. The Aston was just 0.009 seconds faster than the TCR machine in qualifying, and now held sway by less than a second in the race, with Byford having no intention of losing touch by letting Cunningham split them. The Cupra put up a fight, but had no answer to the Porsche’s superior power, and once past Trundley, overall third place was attained by the yellow and black Porsche. "My brain came out, but to be fair, great driving from the others, made it tight but gave the room" said Mark later.

By nine laps in, the Taranis had a lead of around 20 seconds over the McLaren, and then the Safety Car was deployed, to allow recovery of the Newbarn Racing Jaguar F-Type, which Callum Thompson had parked with a broken prop shaft, a disappointing reward for the team, who had burnt the midnight oil re-assembling the gearbox after an issue in Friday testing. The Safety Car picked up Chris Goddard’s Ferrari, then lying 15th overall in the mixed order, and once the pit window opened, two laps later, the blue Ferrari was first of virtually the whole field to come in for the mandatory stop. Mark Cunningham, though, was loathe to pit so early, wanting to maximise his seat time in the Porsche, but a Safety Car pit stop opportunity can’t be squandered, so he reluctantly came in next time around, by which time Charlie Hollings, having taken over the Ferrari from Goddard, was out on track, and now in the lead of the race.

In the lead by over half a minute once the field went green again in fact, though it didn’t last, as an overly-short pit stop was identified, and Hollings was called in to make the time up by way of a stop/go penalty, the same fate befalling Peter Cunningham, who had taken over the family Porsche from son Mark, and the Cupra TCR of George Heler, which had been started by Jonathan Beeson.

Once the field settled, Aaron Morgan was in the lead, in the Team BRIT Aston Martin started by Trundley, with Ash Woodman second, having relieved Byford in the EDF Cupra, and Hollings recovering from his penalty. The McLaren and the Taranis were cutting through the field again, this time with Will Powell barely a second ahead of MacGregor. They traded places for a few laps before getting separated by some recovering Pragas, and Powell was just getting to grips with Holling’s Ferrari, now back in the lead, when the Safety Car boards came out. That was it – just the boards, and no car. Mark Steward had parked the Digiplat BMW GTR started by Nathan Wells out at Cascades, having cut-out with a sensor issue, but having worked out the problem, performed a ctrl/alt/del operation which got the car going again. So we had a virtual Safety Car for two laps, after which Powell resumed his assault on Hollings. It took a couple laps, as the two experienced pilots duked it out, and the McLaren was back in the lead again, with around 12 minutes of the race left. It took the Taranis a little longer, Hollings was in no mood to relinquish an overall place, and when the flag fell, after 34 laps, Powell took the Endurance win, a creditable fourth place in the race overall behind the leading three Pragas. MacGregor’s second place, overall and in class, was an impressive season debut for the Taranis, and it was redemption for the RNR Performance Ferrari 488, third overall, and the Class 3 win. The Class 3 podium went down to the wire. Marcus Fothergill, having taken over the Bespoke Defenders Porsche 991 from Dave Benett, was mounting a bespoke attack on Peter Cunningham’s 997 ahead of him, tearing four seconds a lap out of the gap, and crossing the line just 0.358 seconds ahead of the SG Racing car, a supreme effort to bag second in class, which did no harm to their championship points tally.

Aaron Morgan and Ash Woodman resumed the Class 4 lead battle started by their co-drivers Bobby Trundley and Martin Byford, the Aston just a second and a half ahead of the Cupra at the flag, exemplifying the equality of well-driven GT4 and TCR machines, with the Audi TCR of Hugo Cook/Sacha Kakad in the final podium spot, ahead of the Aston Martin of Dale and Mark Albutt, with the newly-ballasted TCR machines of Tim Docker, Alex Day/Will Foster and Jonathan Beeson/ George Heler being split by the Porsche Cayman of Peter Erceg, who finished an atypical seventh in class.