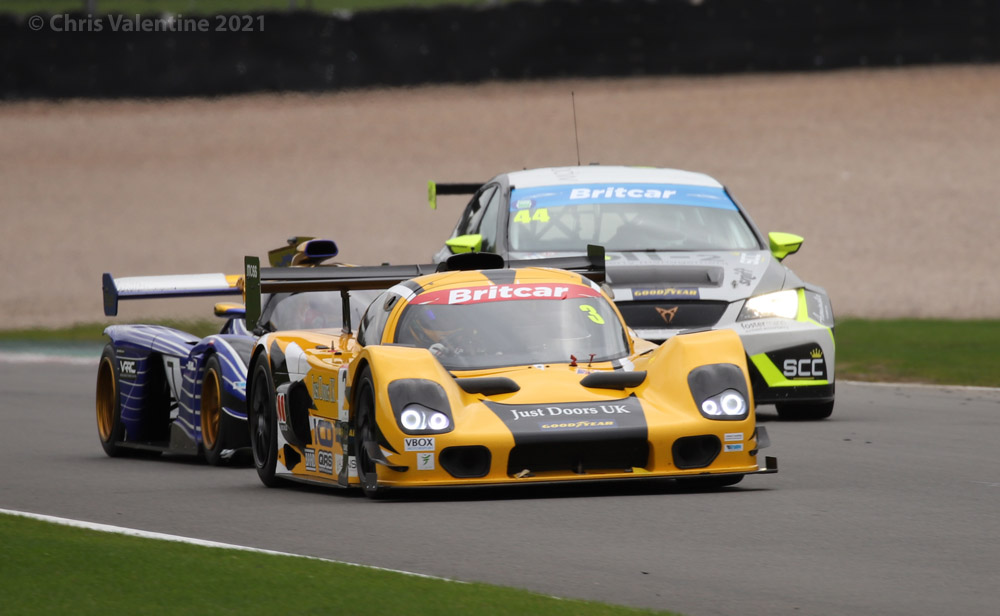 Lone driver Jonny MacGregor, driving his self-built Taranis, claimed the win in a fraught encounter, after the on-the-road winner, title contenders Dave Scaramanga and Will Powell, in the Motus One McLaren, were awarded a 30-second post-race penalty for an infringement.

There was the usual first-corner mayhem at Redgate after 30 cars took the rolling start, as the lead car of the Praga pack spun into the gravel, causing a melee of spinning, sliding and contact, which continued down the hill to Hollywood and the Craner Curves. Out on the spot was the Porsche 991 of Dave Benett, avoiding the carnage by taking to the grass but clobbered heavily by a spinning Praga, and Bonamy Grimes suffered radiator damage in the Ferrari 458 which the FF Corse crew would have to fix in readiness for the next race. Dave Scaramanga had got the nose of the McLaren into the Praga pack into Redgate, but was delayed by the confusion that ensued, and the Safety Car was deployed immediately.

After 13 minutes of caution, the field was unleashed again, and the remaining Pragas that led the pack came under attack from the front-running Endurance contenders, MacGregor’s Taranis and Richard Wheeler’s Nissan (up 14 places after qualifying issues) swamping the prototypes into Redgate, before taking the leading positions, joined by the stunning Invitation-entry Aston Martin Vulcan of Steve Tomkins, which quickly took second place, Lewis Plato in the Valluga Ferrari 458, and Mark Cunningham, who had skilfully negotiated the various calamities by millimetres, in the SG Racing Porsche. It would appear that the GT cars had the legs of the Pragas here, at least in the first half of the race, and there hadn’t been too much racing before the pit window opened, and those with a pro-driver in the partnership took the opportunity. Staying out, though, was Mark Cunningham, but the yellow and black Porsche came to a halt with driveshaft failure on the Melbourne Loop, so with half the 60-minute race run, the Safety Car was called again, a good time for the rest of the field to take their mandatory stop. Or maybe not – the way it fell, the Vulcan now in the hands of Gleb Stepanovs, was in the lead, but had joined the crocodile at the back, and Jonny MacGregor, somehow now in second place, was at the front of the queue, thereby losing the best part of a lap. Once the field went green again, the gap between the Vulcan and the Taranis was nearly a minute and a half, but the advantage was in part due to a short pit-stop by the Vulcan, and a stop/go penalty of 20 seconds brought the resumption of the lead as an option for MacGregor. It took a while though – six laps, by which time the Taranis mirrors were busy with Pragas reclaiming their overall positions, and the recovering McLaren, with Will Powell now in charge. Powell made short work of it, the Taranis allowing a dive down the inside at Redgate with six minutes to go, and that’s how it stayed, the pair separated by six seconds at the flag, though Powell was already aware that a judicial was in the offing. The Vulcan was third, just hanging on as Danny Harrison in the big Nissan was little over a second shy at the end, claiming the third-placed points. 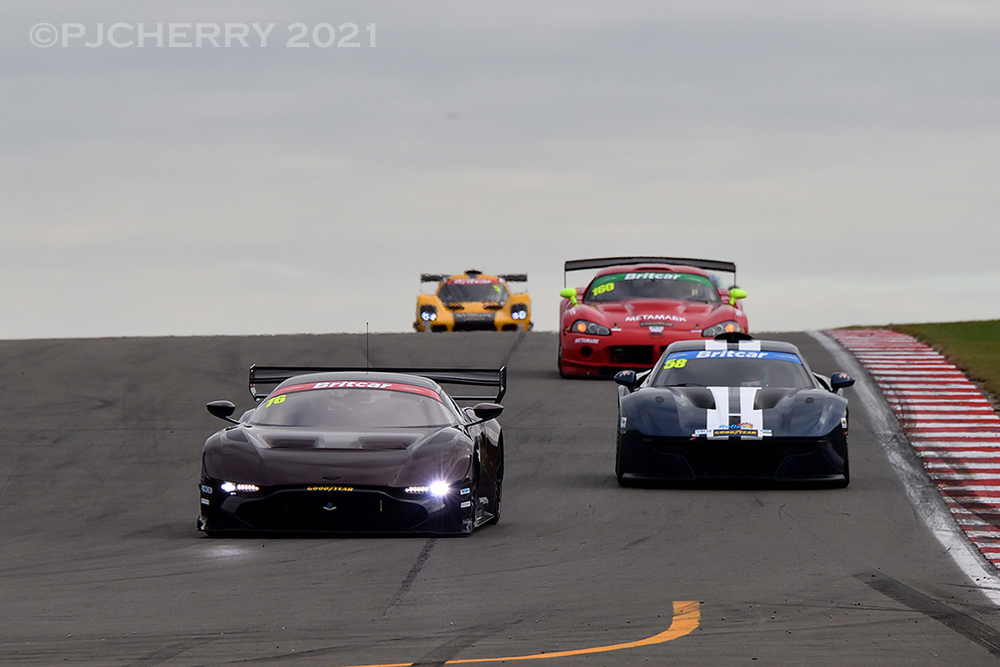 Chris Goddard had a first lap spin in the RNR Ferrari 488, possibly due to the fluid laid down by the similar FF Corse machine that was inadvertently involved in the opening accident, and Charlie Hollings was stymied in his closing stint as the car drew to a smokey halt on the Melbourne Loop just minutes from the end, so the only Class 3 car to take the flag was the Invitation entry Valluga Ferrari 488, which ran with the Pragas during Lewis Plato’s opening stint, and finished with Carl Cavers at the wheel, just ahead of the Class 2 invitee, the stunning RNR Dodge Viper of Wayne Marrs and Tom Jackson, with Marrs recovering well from the first lap shenanigans.

Lone driver Peter Erceg claimed the Class 4 win in the PB Racing Cayman, chasing down Jonathan Beeson in the Sheard Golf TCR that had been started by George Heler, finishing six seconds ahead. The top class spot had been held by the Alex Day / Will Foster Cupra TCR, but a stop/go penalty for a short pit stop demoted them to fourth at the flag, behind the similar EDF-run machine of Ash Woodman and Martin Byford, and it was an impressive debut for the new pairing of Trophy contenders Charlotte Birch and Jamie Vinall-Meyer in the Reflex Racing Ligier JS2-R, fifth, after going off in avoidance of the first-corner contretemps. Erstwhile class leaders Bobby Trundley and Aaron Morgan were next up in the Team BRIT Aston Matin Vantage, while the extended gap between Britcar events had allowed Nick Hull’s broken leg to recover fully, and he partnered Richard Avery to eighth position in the Full Throttle Motorsport Cupra TCR, while the Aston Martin Vantage of Dale and Mark Albutt took in a few pit stops on it’s way to ninth. Hugo Cook and Sacha Kakad saw their title aspirations slip away in the Simpson Audi TCR, a broken drive shaft in qualifying being a portent to further issues in the race, while repairs to the Mark Havers/Rick Kerry could not be completed for the start of the race.