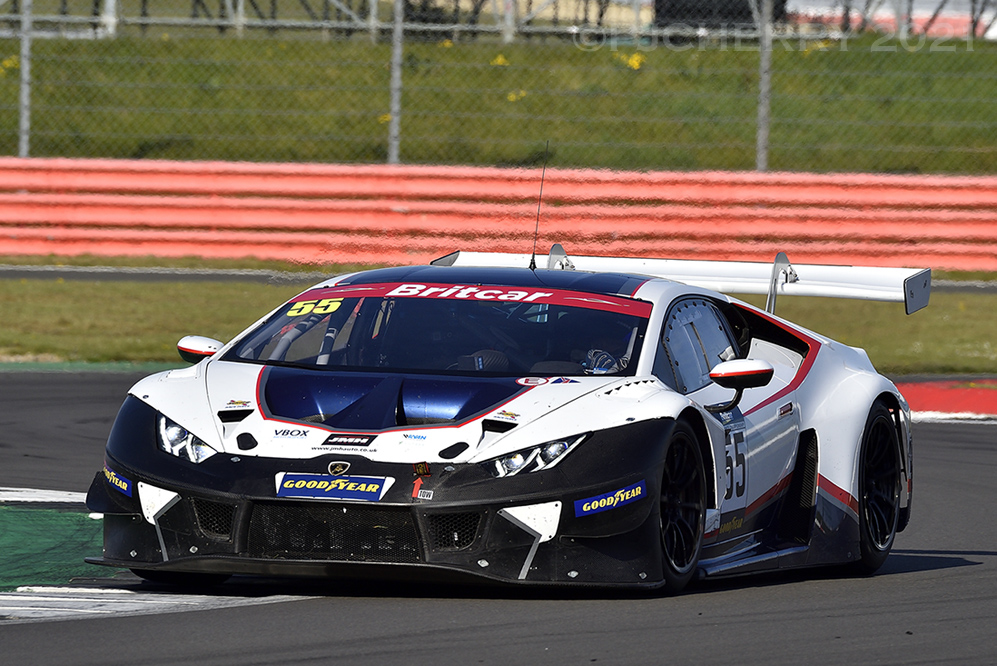 John Seale and Jamie Stanley took a convincing win in the season-opener at Silverstone, their JMH-run Lamborghini Huracan finishing a lap ahead of the beefy Nissan GT3 of Richard Wheeler and reigning champion Danny Harrison.

Seale started the Lambo from pole, and was sensibly cautious at the rolling start, letting two Pragas streak ahead and then tangle with each other into the first corner, an incident which saw welcome returnee Franck Pelle sieze the lead in his Lamborghini. Lucky Khera’s Ferrari 458 and fast-starting Mark Cunningham, in the SG Racing Porsche 997, were furiously disputing track position, but the Safety Car was deployed just 10 minutes into the race, after a clash between Marcus Vivian’s Ligier and the TCR machine of George Heler. By this point, Will Powell had brought the Motus One McLaren 650S up to second place behind Pelle, and ahead of Seale, Wheeler, Bon Grimes’ Ferrari 458, the similar machine of Charlie Hollings, Mark Cunningham and Lucky Khera.

The pit window opened while the Safety Car was still out, and Khera, and Pelle from the lead, were the first to stop, ironically just a lap before the caution was lifted; the theoretical "undercut" was negated then, and it would be four more laps before the heavy-hitters pitted, Wheeler making a dash to steal the lead from Seale and gain a small advantage before they both came in simultaneously. Powell assumed the lead, over half a minute ahead of Class 3 leader Bon Grimes, class mate Mark Cunningham, Craig Davies’ Ferrari 488 and the Porsche 991 of Marcus Fothergill. The erstwhile leading group rejoined, all two laps down, Jamie Stanley now the "virtual" leader in 13th place, lone-driver Pelle in 15th, and Danny Harrison, now in the Nissan, 17th, and there was 23 minute left.

Sadly, the potentially most exciting part of the race was upset for the observer by a timing screen malfunction, crucial in pit-stop racing, so progress could not be monitored, but once the screens were back up again, 36 laps in, Stanley headed the Endurance runners, and was carving out chunks of time from a Praga ahead on the road. Eventually taking the lead of the whole race just none minutes from the end, Stanley headed a trio of Pragas, followed by Danny Harrison’s Nissan, and lone-driver Franck Pelle, the Cheshire-domiciled Frenchman having impressed on his Britcar return in the Simpson Lamborghini. The Motus One McLaren was fourth in Class 1, Dave Scaramanga bringing the car home after the expected storming opening stint by Will Powell.

"It was very busy out there" said Stanley after the race, adding, "but John had a good start and gave me an easy crack", while Seale commented "Jamie was brilliant, and the JMH team did a terrific job".

Ross Wylie took over Lucky Khera’s Ferrari 488, and bagged the Class 2 victory, six laps ahead of the only other Class 2 finisher, the similar car of Mike Jones and Craig Davies, while it was the 458 of Johnny Mowlem and Bon Grimes which claimed the Class 3 win, ahead of the Porsche contingent, Mark and Peter Cunningham taking the runner-up spot and Marcus Fothergill / Dave Benett completing the podium, while the BMW GTR of Nathan Wells and Mark Steward didn’t have the legs of the Ferraris and Porsches on this circuit, and Chris Goddard’s Ferrari 458, started so well by Charlie Hollings, completed only 38 minutes of the race after having water temperature concerns.

The highly-populated Class 4 was ultra-competitive; Stewart Lines sadly had a mare of a race, a spin and a penalty conspiring to drop his Ginetta G55 to the bottom-end of the result, the delectable Maserati of Vance Kearney and Richard Dougal retired early with gearbox issues, the Aston Martin of Mark and Dale Albutt endured race-long issues cutting-out, and erstwhile front runner, the EDF Cupra started by Martin Byford, suffered fuel pressure concerns early in Ash Woodman’s closing stint. So it was Alex Day and Will Foster who took the Class win, in the CTR Alfatune Cupra TCR, ahead of the Audi TCR of Hugo Cook / Sacha Kakad, with the Porsche Cayman of Lee Frost and Nathan Hanslip completing the Class podium.

Fourth in Class was Peter Erceg’s Cayman, the lone-driver showing his usual stealthy performance, ahead of Britcar debutantes Danny Krywyj and Miles Lacey in the Motus one Cupra TCR, ahead of Tim Docker’s Golf TCR, the Team BRIT Aston Martin (after an atypically subdued performance from Bobby Trundley and Aaron Morgan), Chris Murphy’s similar car, fresh out of the box and in it’s first competitive outing, and the Cupra TCR of Nick Hull and Richard Avery.

So, the Class 1 Endurance cars were capable of beating, and at the least splitting, the Praga contingent, and provide some close racing in their own right, while the classes were hard-fought too.