Endurance Race 2 Report: A Clean Sweep for Scaramanga and Powell 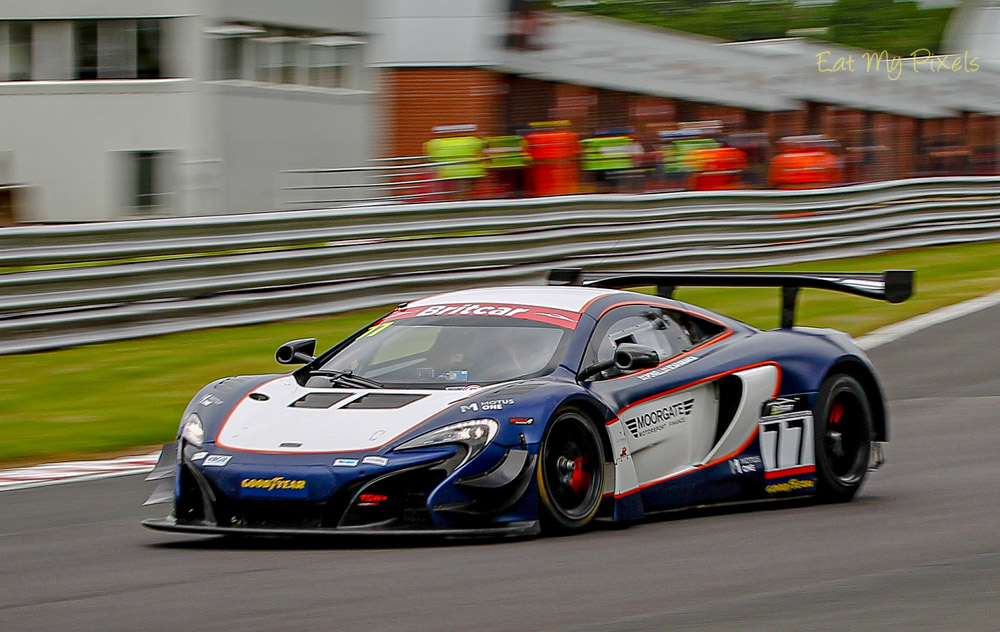 It was a double victory for Dave Scaramanga and Will Powell in the Motus One with Moorgate McLaren 650S, once again ahead of Johnny MacGregor’s Taranis, which was proving a bit of a handful as the race came to an end.

The Pragas once again dominated the front-end of the race, with Richard Wells making the early running, and was notable for Gordie Mutch’s defence of the mid-race lead, against the advances of Angus Fender, and his later last-minute thrust to retake the top spot, which was thwarted by traffic on the very last lap, a stunning performance which earned Mutch the coveted Britcar Driver of the Day award for the Praga category.

It was Scaramanga and MacGregor heading the Endurance field as the pack was let loose at the rolling start, with Mark Cunningham making his characteristic storming start to join them, the trio posting almost identical lap times and with barely two seconds covering them in the opening laps, and there was a real ding-dong in Class 4 – Martin Byford’s Cupra led ("We have a plan" winked Ash Woodman during the interval, without revealing any more), with Aaron Morgan in the Team BRIT Aston Martin behind, but Sacha Kakad’s Audi was looking very racy, nicking the spot from Morgan, while Jonathan Beeson, relishing rather than rueing his grid penalty in the Sheard Cupra, took Peter Erceg’s Cayman, and was on the tail of Dale Albutt’s Aston, and if that wasn’t enough, Will Foster, in the CTR-Alfatune Cupra, was trading places with Tim Docker’s Golf.

As in Race 1, the Safety Car was deployed nine laps in, this time for Aaron Morgan’s Team BRIT Aston Martin, which had sadly gone off, and needed to be made safe. And again, this coincided with the pit window opening, with all of the Endurance runners taking the opportunity to come in. Just a three lap caution period, and the field went green again, with all stops having been taken, and it was Will Powell, now in the McLaren, ahead of Hugo Cook’s Audi, after that sensational opening stint by Kakad, Ash Woodman in the EDF Cupra, and Charlie Hollings, who had taken over the RNR Ferrari 488 from Chris Goddard. Down in the mix were Peter Cunningham, Dave Benett, who had relieved Marcus Fothergill in the Bespoke Defenders Porsche, and lone driver Johnny MacGregor, who was soon back in touch will Powell, but as the race wore on, so did the tyres on the Taranis, and McGregor’s nursing turned to struggling, losing three seconds a lap to the McLaren ahead.

Locally-based teenager Hugo Cook was enjoying the Class 4 lead in the Audi, while Ash Woodman quietened down in the Cupra (was this the plan? We’ll probably never know), but, with 15 minutes to go, the Audi had a minor clash with another TCR car, causing a grassy moment, and later round the lap went off into retirement, a broken suspension component later being diagnosed. This was cruel luck for the potential class winner, though Sacha Kakad’s earlier stunning performance earned him the Britcar Driver of the Day award.

There were no heroics from the Endurance contingent in the closing laps, and Powell took the flag, 34 laps again, to clinch a brace of victories for himself and co-driver Dave Scaramanga, the Castle Combe regular earning the Sunoco Driver of the Day award for his solid performance on his first visit to Oulton Park. MacGregor’s Taranis was runner up on worn rubber, and the third-placed RNR Performance Cars Ferrari 488 of Chris Goddard and Charlie Hollings bagged the Class 3 victory, ahead of the Porsche 997 of Mark and Peter Cunningham, the 991 of Marcus Fothergill and Dave Benett, which took an extra pit stop in Benett’s closing stint, and the Digiplat BMW GTR of Nathan Wells and Mark Steward, which made several stops with sensor issues.

Ash Woodman brought the EDF Cupra started by pro-driver Martin Byford home to the Class 4 victory, and although second on the road, the Alex Day/Will Foster Cupra was awarded a 10-second penalty for a yellow flag Safety Car infringement, causing them to relinquish their place to Peter Erceg’s Cayman by just 0.575 seconds. All of the Class 4 runners had exceeded their previous form in this race, and the Triple M Aston Martin of Dale and Mark Albutt was fourth, a lap ahead of the Beeson/ Heler Cupra, while Tim Docker pitted his Golf 10 minutes from the end, but was classified sixth in class.

With several no-shows, and some mixed fortunes, the pair of races has thrown some unexpected situations in the points table – Fohergill and Benett go into the prestigious Silverstone GP round leading the championship with 141 points, with Peter Erceg close behind on 139. It’s all to play for!