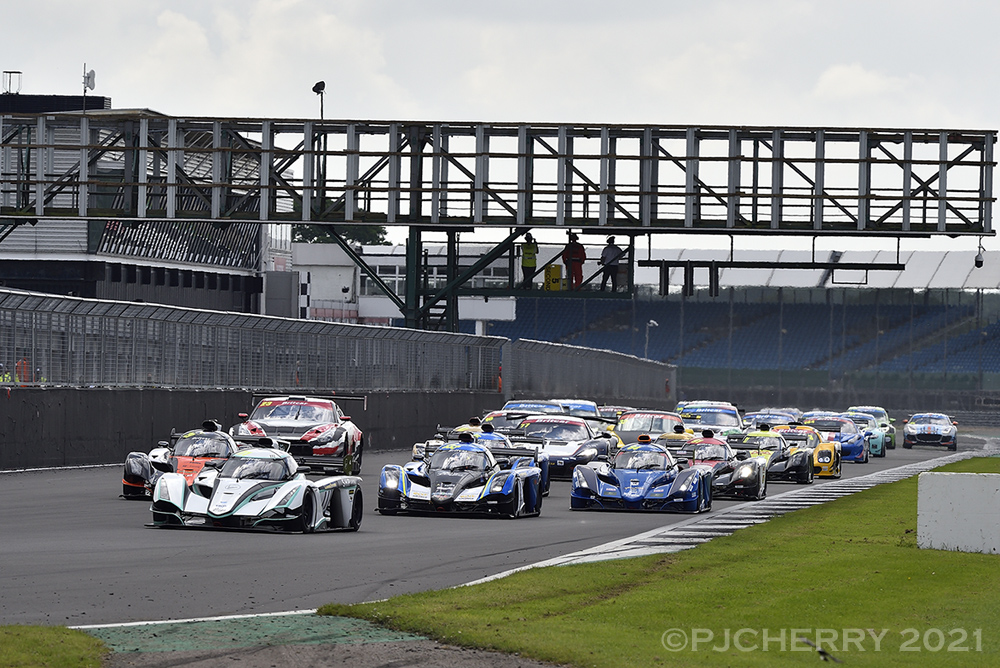 Dave Scaramanga and Will Powell, driving the McLaren 650S run by Powell’s Silverstone-based Motus One team, took their second overall win in a row, exercising the skill and stability required in a two-hour race of varying and challenging conditions on the circuit’s GP configuration, and capitalising on the car’s reliability.

With the Pragas locking out the first four rows of the grid, it was the Fox Transport Nissan GT3 claiming pole for the Endurance runners, Danny Harrison’s time in wet conditions of 2:17.572 just two-tenths ahead of Powell’s time in the McLaren (which had incurred expensive night-shift repairs following a Friday testing incident), with the MacG Taranis third.

Weather conditions through the morning identified that rain could come quick and heavy, but stop just as swiftly, so slicks were the order for the race start, and once the red lights went out, the Nissan, with Richard Wheeler taking the opening stint, was in amongst the Pragas, while Mark Cunningham made his usual fast start in the SG Racing Porsche 997, and was up to second, ahead of Dave Scaramanga in the McLaren, and Ben Sharich’s Taranis. 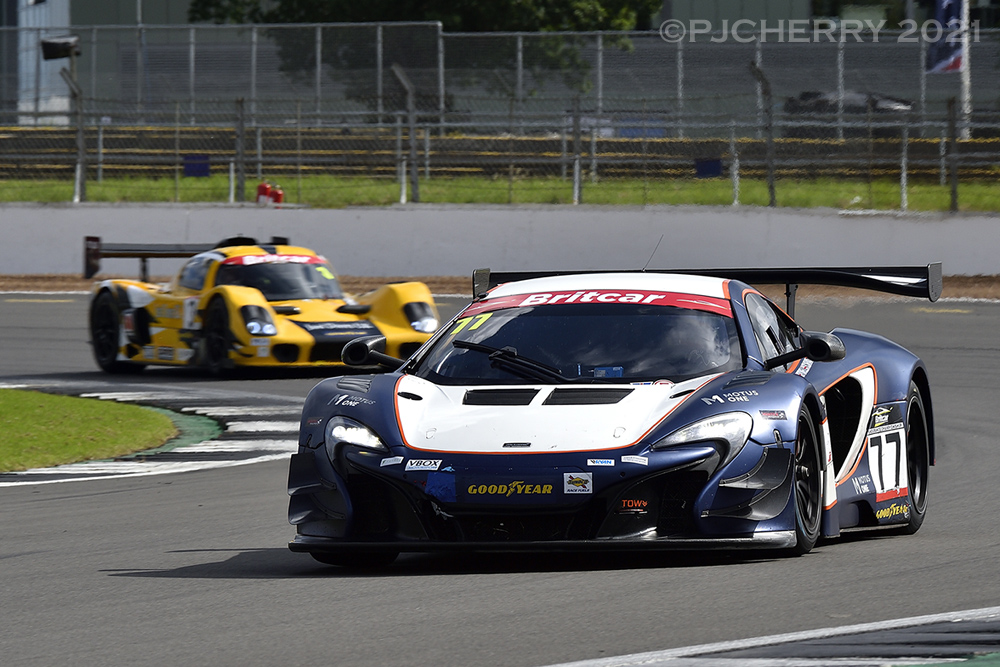 Based just a stone’s throw away, the Motus One team’s McLaren 650S took the Endurance category win

Wheeler had pulled out nine seconds over Cunningham by the third lap, and the yellow and black Porsche led a close-coupled train comprising Scaramanga, and Bon Grime’s Ferrari swapping places with Sharich. Behind them, the TCR cars in Class 4 were equally close, with the Cupras of Martin Byford and Will Foster heading Hugo Cook’s Audi. Scaramanga got past Cunningham, then a heavy cloudburst made it’s way across the circuit, firstly affecting certain parts, then eventually covering the whole track, causing an amount of spinning and straight-lining of corners, particularly from the leading Praga contingent. Received wisdom was that the cloud would blow over quickly, so the majority of the Endurance field opted to tough it out on slicks, with Wheeler adopting a cautious approach in the big Nissan, while Mark Cunningham assumed the lead in the nimbler Porsche. Making the call for wets, though, was the RNR Ferrari 488 of Chris Goddard, though the experienced Ferrari and classic racer was less than happy with the handling of his new rubber, exacerbated by a track that was rapidly drying. He stuck it out until his mandatory 40% driving time elapsed, handing over to Charlie Hollings, who, though now out of place position-wise, enjoyed some later track action with occasional team-mate Johnny Mowlem, though had to take a late race stop for a top-up of fuel, finishing an atypical ninth overall, and fourth in Class 3.

Bon Grimes’ Ferrari was now challenging Cunningham’s Porsche, and took the lead on lap 17, with Wheeler maintaining his cautious pace in the Nissan and keeping ahead of Scaramanga, who then was passed by Byford, revelling in the still-damp conditions. Nicole Drought was having an eventful race in the Motus One Hyundai TCR; recovering from an early grassy moment, some place-swapping with George Heler’s TCR machine was followed by some side-by-side action with Peter Erceg’s Cayman, while Dave Benett’s Porsche was being pursued by Chris Murphy’s Aston Martin. 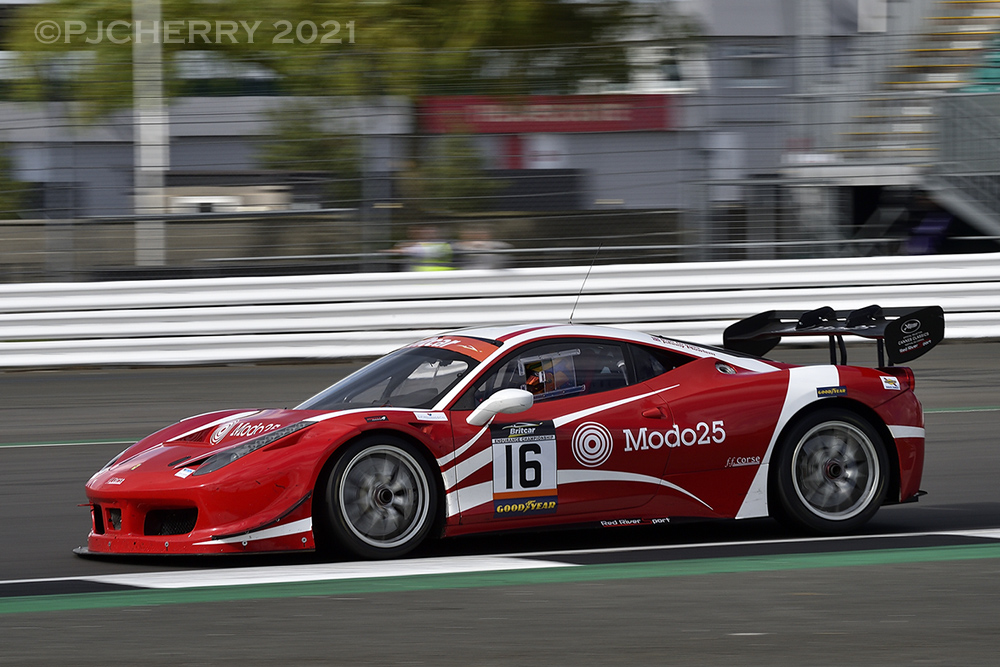 The majority of the field took their mandatory stops a few minutes either side of the halfway mark, while Hugo Cook assumed the lead of the race but left it too late in the Audi, pitting after the pit window closed, forcing take-over driver Sacha Kakad to take a stop/go penalty. Peter Erceg was also pushing the envelope, though never had a chance to make his stop, after his Porsche Cayman expired out on the circuit.

Once the field settled again, Johnny Mowlem, having taken over the #16 Ferrari from Grimes, had a lead of around half a minute over Danny Harrison, now in the Nissan, and Johnny MacGregor, who had relieved Sharich in the Taranis. Mowlem took an extra pit stop for fuel, which dropped him down to fourth, and Harrison, still in the lead, was nursing an ailing gearbox which eventually led to just fourth gear being available for a cruise to the finish. Also stopping for more fuel was the EDF Cupra of Ash Woodman. The erstwhile class-leading car was experiencing fuel pressure problems which the team fixed by loading up the tank again. Ash put in a stunning stint, and fourth in Class 4 was scant reward for an outstanding performance by the team and drivers.

McGregor whittled away the gap to Harrison, and took the lead in the final 20 minutes of the race, but glory was short-lasting, as after just two laps the Taranis slowed and came to a halt, an electrical malfunction, possibly a crank sensor issue, putting paid to a well-deserved overall win for the MacG Racing team. By now, Will Powell had taken the Motus One McLaren past the Nissan, and was now the Endurance race leader, and such was the lead he built, could allow an additional fuel stop inside the final 10 minutes, and allow Dave Scaramanga to climb back in to maximise his stint time; "That was a bit of a surprise, with 30 seconds notice, but it was good to both start the race and take the chequered flag" said Scaramanga later.

With the Praga contingent completing 56 laps – with no Safety Car periods – the flag fell on Jack Fabby, who, sharing with Charlie Martin, finished less than a second ahead of a chasing Chippy Wesemael, though a post-race 34-second penalty saw the positions reversed, but did not affect Fabby being adjudged Praga Driver of the Day. Scaramanga, best of the Endurance runners, completed 54 laps, and had to respond to a charging Johnny Mowlem, who was just 10 seconds adrift at the flag, causing some who had forecast the endurance-savvy FF Corse/Red River Sport team for the overall win to tear up their betting slips. Danny Harrison brought the Fox Transport Nissan home third, a supreme effort under the circumstances, and in no small part due to Wheeler’s rational approach in his challenging opening stint.

Fourth, and second in Class 3 went to Mark and Peter Cunningham, after Peter’s closing stint in the SG Racing Porsche 997 caused some excitement (" I was all over the place" he admitted), who finished ahead in the class placings of Dave Benett and Marcus Fothergill’s Bespoke Defenders Porsche 991. 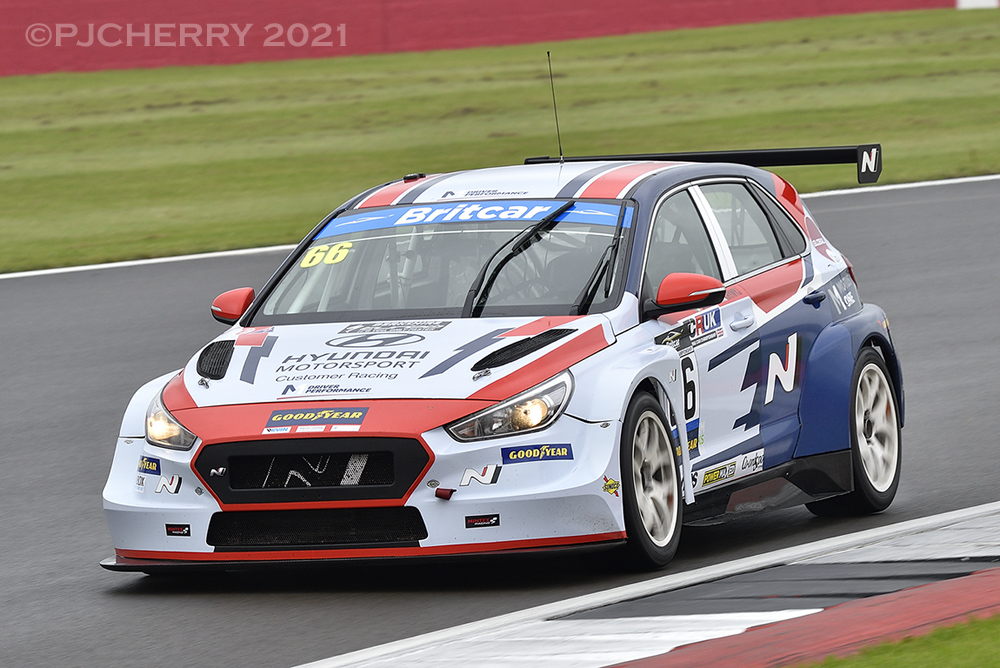 Nicole Drought and Danny Krywyj made up for Oulton’s disappointment with a Class 4 win, with Drought also landing Britcar Driver of the Day

Class 4 was mainly a TCR affair for this race, leaving lone-driver Chris Murphy upholding honours for the Aston Martin marque, and unfazed by tackling the two-hour race alone; he finished fifth in the class, while the Triple M machine of Mark and Dale Albutt endured penalties and an rear tyre explosion, and it was a low-key day for Team BRIT, usual class lead battlers Aaron Morgan and Bobby Trundley experiencing issues and never really in the running, plus Mike Coker, making his debut, managed just nine laps in his Aston. Taking the class win was the Motus One Hyundai TCR, Danny Krywyj pushing ahead after Nicole Drought’s climb through the order in her opening stint (which earned her Britcar Driver of the Day award), ahead of the Simpson’s Audi of Hugo Cook & Sacha Kakad, despite their penalty, with the Sheard Autosport Golf TCR of George Heler & Jonathan Beeson third, though sadly the CTR Alfatune Cupra, which was always in the front-running pack in the hands of Will Foster and Alex Day, expired just seven minutes from the flag, and new entrants Mark Havers and Rick Kerry were getting to grips with their newly-acquired Cupra, but retired after 75 minutes. Finally, the Newbarn Racing Jaguar F-Type; a relatively trouble-free test day augured well, and, whilst there were several pit stops, Callum and Adam Thompson finished the race, eight laps down on the Endurance winner, and ninth in class, a considerable achievement for the enthusiastic team.