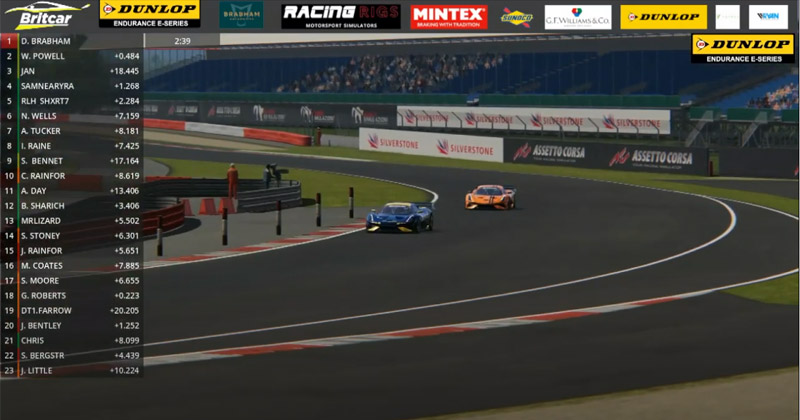 To race on the Brands Hatch Grand Prix Circuit is a rare chance these days, at least in real life it is, but Sim racing opens up all sorts of opportunities, and the competitors in the Britcar E-Series will savour the famous track configuration this Thursday evening.

Four races into the series, and the Brabham BT62 has been triumphant every time so far, with Motus One driver Will Powell posting three wins against Brabham Automotive team boss David Brabham’s one victory. The wins have been close-fought though, and more than once Brabham has had to fight back through the field after electronic glitches or being taken off. As usual, two further BT62s will boost the Brabham line up. This time, Sam Brabham, David’s son, is joined by Brabham Automotive Design Engineer, Scott Stephenson. Sam has enjoyed single-seater success in both the UK and the Asian-based MRF series, and more recently in the Pro-Am category of the BTCC-supporting Carrera Cup UK, where he has posted a win and several podiums. Scott Stephenson not only works on the design and development of Brabham vehicles, he brings experience racing Formula Fords as a junior and with local GT and production car racing since. Both of the previous race winners are looking forward to racing at Brands: "We very much look forward to racing the Brabham BT62 at Brands Hatch, a track we have had so much success in the past, and in particular, last November’s Britcar Dunlop Endurance Championship "Into the night" win. It is great we have another one of our engineers Scott Stephenson from Brabham Automotive join us, plus my son Sam who I am sure will be keen to beat his dad in a Brabham at Brands Hatch!" said David, while Will commented; "Brands Hatch GP is a challenging circuit, and it’s got great memories for me, as I grew up in the area. With the virtual BoP applied, it’s going to be a challenge to set up, but I’m looking forward to a fun race", and on the question of the difference between real racing and Sim competition, "It’s like different racquet sports, like tennis and badminton, requires a different skill-set".

There are many contenders keen to thwart the Brabham’s ways, and chief among these is Morgan Short, who has been the most consistent challenger in his Rollcentre Racing BMW Z4, though the teenager has mixed feelings about Brands Hatch: "The Z4 may struggle around Brands, as its main strength is top speed and long, sweeping corners that require heavy downforce. Brands is a different challenge to the tracks we’ve done before, and on paper the BMW, the McLaren and the Mercedes are only separated by a tenth or two. The real challenge will be keeping the tyres alive for the entirety of each race. Luckily, the Z4 seems to be decent on tyres, but the Merc is noticeably better towards the end of a race, so that will be something to look out for. Also in my favour is that the Brabhams appear to be less suited to this track, according to Will, so if I play my cards right this is a good opportunity to beat them! The 650Ss are an unknown, but they seem to be rapid, along with the Glickenhauses, so it’s all to play for. I’m really looking forward to Brands, but I feel it will likely be a case of whoever survives lap one is on for a good finish!"
The Mercedes threat Morgan talks of is diminished for this event, only Alex Day upholding honours for this event, but there are a number of new entrants in the class, and renewed confidence from established runners, which could pose a very real challenge – the pair of Glickenhaus machines from MacG Racing for instance, where Isaac Raine reckons "Brands Hatch seems like a better track for our car so we should be able to take it to some other Class 1 cars, and it helps that there are less AMGs for us to fight".

Less AMGs yes, but those new entries could well queer the pitch. VR Motorsport are upgrading to the turbo version of the Praga R1, for Al Boulton and Jack Fabby, and Boulton is relishing the move:
"No excuses now! Looking forward to a VR team effort from myself and Jack in the more powerful Class 1 turbo variant of the Praga. I’ve never driven the Brands GP circuit in real life but having done some sim practice on it, would love to see it as part of the real Britcar calendar at some point in the future. This version of the car feels very similar to the real version, unlike the non turbo one which was less so. The physics engine of this sim is very impressive and it will be good to see if we can challenge the front runners this time around".

Three McLaren 650s GT3s are joining the fray, one for Glynn Geddie, and two from Team BRIT, where Andy Tucker transfers from his Mercedes, and Bobby Trundley moves up from his Class 2 SEAT TCR, and the pair are expecting big things: " Really looking forward for a new challenge in Class 1 racing alongside my team mate Andrew Tucker. Hopefully me and Andrew can pull off some great results for the rest of the Season!" says Trundley, while Tucker is equally upbeat, and is racing for a good cause: "I’m looking forward to having my team mate Bobby Trundley join me in class 1. We’re pushing each other quite hard so that our lap times improve for the next round at Brands Hatch. I’m also really grateful that Darren Cook has created our livery designs yet again, top work as always! Pride of place on my car among my sponsors logos Inspired Business Media and GRDetailing is the logo of local charity, Casey’s Cause. Casey has several life shortening disabilities, yet maintains a smile that would light up the darkest of rooms! I’m supporting the charity this season and beyond in memory of Casey’s father, Corporal Anthony Hard, who sadly passed away in November 2015 as a result of a brain tumour."

Add to all this a veritable battalion of BMWs – Nathan Wells and Steve Burke have shown well thus far, and Chris Murphy and Mike Moss have entered too – and Class 1 is more competitive than ever.

Class 2 has, in the main, been an unmitigated success, for the 21 year-old Rainford twins – James, with no real-life racing under his belt, won the opening round in his SEAT TCR, while Charles, having transferred to a Ginetta G55, took two dominant victories at Silverstone, and the East Sussex driver, a regular Goodwood competitor in a Lenham GT, Marcos 1800 and Volvo PV544, is looking to repeat his performance: "Going into the Brands Hatch round I’m hoping for big things again after my CCK Ginetta performed so well at Silverstone. The setup at the moment is unchanged and the times look quite competitive so I’m really looking forward to it."

Taking the fight to the Rainfords will be Shane Stoney, the Radical champion posting some good results in his Ginetta G55 of late, while the similar EDF machines of David Farrow and Graham Roberts have shown exciting bursts of form. The G55, it seems, is becoming the weapon of choice in Class 2 – Jake Little will be looking to substantiate his Silverstone progress, and we have yet to see the best of Nicole Drought, who has sadly been on the receiving end of other peoples’ accidents. Team BRIT’s Darren Cook is improving, and as the design guru for the team, has styled the stunning liveries on the two new McLarens, and some other cars on the grid, as he attests: "It’s been a real honour supporting the team, Andy and Bobby have been great to work with.
I have struggled loads on the sims and Andy has been amazing helping me set the Ginetta up for me at Brands. I miss the real thing and can’t wait to get back on track, but I am also excited about the filming plans we at Scruffy Bear Pictures have planned with Team BRIT and its drivers. telling their stories from start to LeMans. It’s going to be an amazing journey. Thanks for the compliments on the liveries – it’s been fun, and I have also been able to create Sarah and Jemma Moore’s Ginetta liveries."

And thereby hangs a tale – Sarah Moore, erstwhile Britcar champion, and a lady spreading her talents over several Sim-racing series at this time, is joined by the youngest of the Moore racing dynasty, sister Jemma, in a pair of Tockwith G55s. Sarah’s 2019 co-driver Moh Ritson will be competing for the first time in a Porsche Cayman, and Peter Spano returns in his similar Ramen Racing car, while international flavour is added by Frenchman Alain Remius, in the G F Williams-entered Lotus Evora, and American multi-champion Shields Bergstrom in his SEAT TCR.