eSeries Spa Francorchamps Race 2: Powell Wins For Brabham, But it Could Have Been So Different 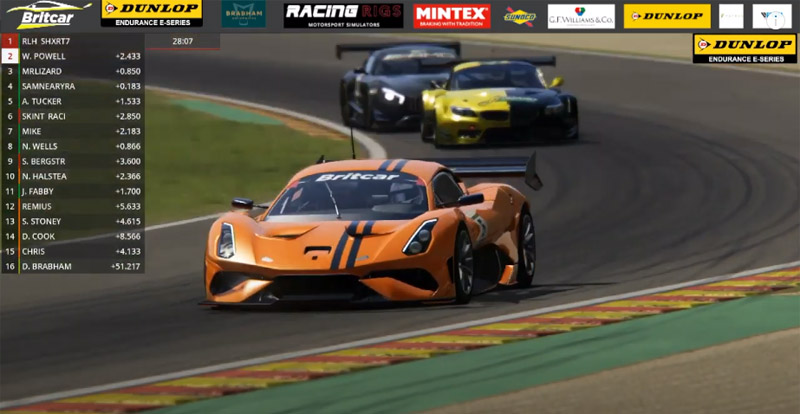 Will Powell took the win in the second Spa e-series race, his Brabham BT62 finishing three seconds ahead of Sam Neary’s Mercedes GT3, but this was a race of both self-initiated and unforced technical gremlins which blighted the race for two serious contenders, and the outcome could have been so, so different.

Powell was alone on the front row of the grid as the lights went out, team-mate David Brabham having pushed a wrong button and "teleported" his BT62 back to the pit lane, and with Nathan Wells’ BMW Z4 hitting the Armco at La Source, it was Powell, Morgan Short’s Z4, and Steve Burke’s similar machine leading the pack through Eau Rouge and onto the Kemmell Straight. Short made a move on Powell into Les Combes, but Burke came through the middle of them and briefly seized the lead, only to get out of shape and let Short back through. Moving rapidly up the order were Andy Tucker in the Team BRIT Mercedes, up from 12th to fourth, and Sam Neary in the similar Team ABBA car, up to fifth from stone last on the grid after woes in the qualifying heat. Through that first, fraught lap Powell, Burke, Neary and Tucker were together, allowing Morgan Short to prove in no doubt that he is his father’s son, and establish a lead of nearly three seconds.

On the move early were Nathan Wells, recovering from his first-corner excursion, Mike Moss’ BMW Z4, and Jack Fabby in another Z4, while David Brabham had joined the field from the pit lane.

Impressive in the Class 3 lead was the Team BRIT SEAT of Bobby Trundley, while Alain Remius was the lone Class 2 runner in the G.F.Williams-entered Lotus Evora, holding 12th place. There was considerable place-swapping in Class 3, the Ginettas of Darren Cook, Nick Halstead and Shane Stoney, and the SEAT of American Shields Bergstrom all getting involved, and there was drama just before the halfway point of the 30-minute race, as leader Morgan Short disappeared from view and tumbled down the timing screen, leaving Will Powell to take the lead. Short had suffered a disconnection from the server, but from his own perspective he was still in the race, with no traffic and supposedly a healthy lead with no cars in his mirrors; he carried on to cruise to what he thought was victory with a 10-second margin, but he was on his own. This was cruel luck for the son of one of UK motorsports legendary figures, though he shown his mettle, posting the fastest lap of the race, and served notice of intent of what might be to come.

Steve Burke’s Team Lizard BMW had dropped down the order, some sort of glitch maybe, but Nathan Wells and Jack Fabby were both on the move again, taking Andy Tucker into Les Combes, a move which un-nerved the Team BRIT driver and caused his Mercedes to spin. The Fabby/Wells dispute would rage for several laps – Fabby seized an advantage at the Bus Stop, then Wells got the place back minutes later, and the skirmish ended when the pair came up to lap Darren Cook’s Ginetta, Fabby hitting the barriers at Rivage.

David Brabham had rejoined several times, but had now withdrawn, though Steve Burke’s Z4 was back in the race, and harrying Andy Tucker’s Mercedes to get a lap back, and Shane Stoney, having started his Ginetta from the pit lane, was up to seventh, and the Class 3 runner-up spot.

Will Powell was three seconds clear of Sam Neary at the flag, not quite the result the Team ABBA youngster would have wanted to celebrate the eve of his 18th birthday, with Nathan Wells an excellent third; "Absolutely delighted to grab a podium in my Britcar ‘debut’. I knew after qualifying that we had good pace, but we were a little bit behind the Brabham boys and a couple of the really quick GT3s in terms of raw, outright speed over a single lap. But we had a very drivable set-up that meant I could maintain my pace over a race distance without making mistakes, so I was hopeful I’d be in a position to take advantage if anybody ran into trouble at the front. I had a few incidents of my own along the way, including getting punted into the wall at turn 1 and dropping to 12th, and a backmarker pushing me wide at Eau Rouge when I was lapping him, but luckily once it all shaked out up front, I was running a solid third. Jack Fabby was pushing me hard, and we traded places a couple of times throughout the race, but I managed to build enough of a cushion to hold him off at the end. A really fun event; very well-organised, and cool to see the BT62s making their debut on Assetto Corsa as well. I definitely wouldn’t say no to a result like this once we get going for real either!"

Team BRIT’s Andy Tucker was impressive in fifth: "I’m very happy to of limped to the finish, I was carrying heavy damage after a collision with a back marker coming out of Raidillion, but decided to stay out on track rather than spend time in the pits loosing places. It was a hard fought race against some excellent drivers battling for position. If the eSeries is anything to go by, then I can’t wait to get stuck in to the Britcar Endurance Trophy! Thanks to Team Brit, Inspired business media and GRD detailing for all their help to make sure I could compete in the eSeries."

Stablemate Bobby Trundley had held the Class 3 lead throughout the race in his SEAT, a magnificent performance given the high level of competition; "I wasn’t expecting that result! Still got some things to improve on" was his modest response. It was a Team Brit one-two, with Shane Stoney’s climb-back, and Shields Bergstrom completed the class podium, with Alain Remius bagging Class 2 honours in his Lotus Evora, and delighted to be involved; "Brilliant evening. It’s not everyday I get lapped by a Le Mans winner."