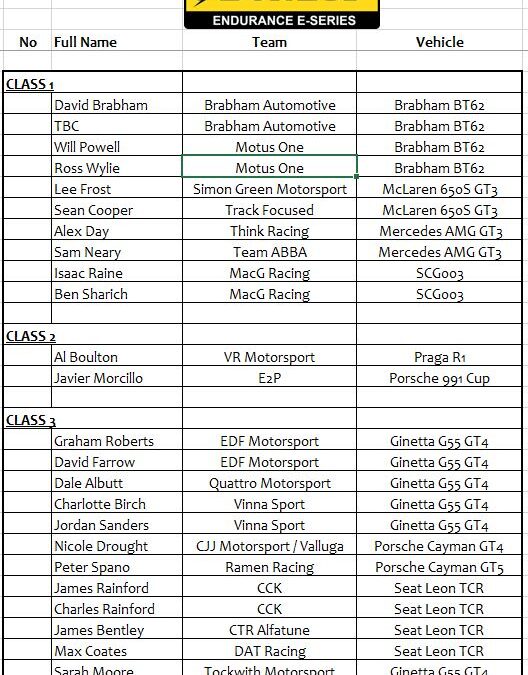 With the grid full and excitement building its time to flesh out some of the details of the upcoming Britcar Dunlop Endurance eSeries in association with Brabham Automotive.

The entry list of the first race meeting is below which will be taking place at the world famous Spa-Francorchamps shortly after Easter 2020. Spa was chosen as it will be the closest date to the Covid-19 affected real life calender which was due to race at Spa shortly after Easter. The keen sim racers amongst you will notice a new car to the sim racing world on the entry list, the Brabham BT62. This has been developed in conjunction with Brabham Automotive using data and schematics from the real life car to realise the virtual version. The car will be seen in public for the first time during this opening round of the Dunlop Endurance eSeries before a public release the following week.

The race format for the first round will be one hour of open qualifying followed by 2 x 30min races for single drivers in each car. The result of the second race will determine the overall result of the race. This format was chosen as it closely mimics the real life Britcar Dunlop Endurance Championship where normally two drivers would share a pair of one hour races giving them approximately an hour of total race time each.

Teams are already designing liveries for their cars and we can’t wait to get the series underway and the date of the first race will be confirmed shortly. Entries have been strong with a number of reserves awaiting a place on the grid.