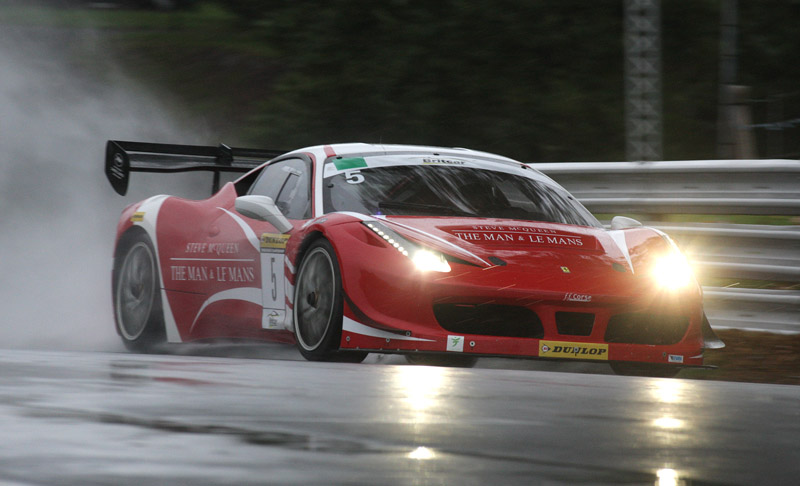 It was double wins in both Sprint and Endurance categories in the second Britcar race of the day. Wet, wetter, blustery winds, bright sunshine and a rainbow over Winsford were significant features of a race truncated by the gathering darkness, and in which Bonamy Grimes/Johnny Mowlem took the Endurance win, and Mike Igoe/Adam Wilcox bagged Sprint honours, both by considerable margins.

With the grid set by the results of Race 1, there were some significant runners starting from way back due to the attrition in the earlier encounter, though not making it out at all was the BMW M3 of Simon Baker/Kristian Prosser; the Woodrow Racing engineers threw all of their resources at it to get it started, to no avail. A throttle motor issue was later diagnosed.

Two pace laps were taken before the field was let loose, and it was pretty much grid order – Mowlem, Igoe, Papageorgiou – into Old Hall Corner, though Adam Shepherd made a blinding start from the third row in the #285 Team Hard Ginetta, making use of a gap left by a cautious-starting Witt Gamski, and seized the inside line to emerge fourth down into Cascades. Significant minnows up in the early mix were Class 4 protagonists Ed Moore (Ginetta G50) and Adam Hatfield (Toyota NGTC) in sixth and seventh places. Early pit stops were made by Scot Adam’s BMW 1M and Andy Wilson’s Monaro – both continued, but it was the end of the road for the recalcitrant Ford Focus of Mark Wakefield, a real shame as this was the HSG team’s chance to shine on their home track.

Mark Cunningham was recovering from his back row start in the SG Racing Porsche 997, and was up to sixth by lap seven, while Papageorgiou’s Ginetta was beginning to worry the Porsche of Igoe ahead for second place. The Sprint runners started making their mandatory stops around 20 minutes in, and joining them was Endurance competitor Angus Dudley, the Team Hard Ginetta displaying front-end damage that needed to be fixed. The Moore family had varying pit-stop strategies – young Ed was early in, handing his G50 to Marmaduke Hall, while clan patriarch Simon hung on to last knockings before letting Rob Hedley into the #25 G50, as did daughter Sarah, the last of the Sprinters to pit, handing Rob Baker his Smart 4/2 back.

It was still Mowlem and Papageorgiou out front, and now that the Sprinters had out-synched themselves with their pitstops, it was Shepherd, Mark Cunningham, then McCollum’s X-Bow hotly pursued by Tom Barley’s Ginetta.

The Sprint runners were called in after 50 minutes; The Porsche of Mike Igoe and Adam Wilcox was a lap ahead of the Moore/Hall Ginetta, and the Taylor/Walker SEAT Cupra, which had ran impressively. At last, there was a race finish for Katie Milner and Ollie Willmott in the Porsche 997, the teenage pairing showing their true potential in a more powerful car; they finished fourth, and second in Class 3, ahead of classmates Dave Benett/Marcus Fothergill in a similar machine, and local experts Rick and Brad Nevisons’ Cayman. The final podium spot in Class 4 went to Adam Hatfield after a another fine performance in the Toyota NGTC, with old hands Moore Snr/Hedley missing out on the prizes this time, and the Monaro of Wilson/Snowdon the victim of several early-race pit stops. Class 5 was a repeat of the earlier race, with Sarah Moore and Rob Baker’s Smart taking the honours, followed by the VW Golf of Roland Hopkins and Matt Boyce.

The finish of the Sprint race coincided with the commencement of a lengthy and rather slow Safety Car period – damage to the barriers at Warwick Bridge meant a heavy repair crew attendance, and a 15mph drive past speed, hence lap times of an unprecedented five to six minutes!

Witt Gamski had pitted the MJC-Furlonger Ferrari early, getting his full allowable allocation of fuel, and ostensibly enough race time left for hotshoe Ross Wylie to claw back the deficit, but this would be negated somewhat due to the Safety Car period. The best part of half an hour was lost in the caution, in which all remaining runners took their stops and changed drivers, some double-stopping to take the mandatory 25 litres of fuel twice.

Due to the multiple pit stops, and the conditions, it wasn’t possible for the Safety Car to pick up the leader, and it was a lucky Ross Wylie who was at the head of the crocodile as the caution was lifted. Despite a short period of heavy rain, the young Scot was off into the distance, punching in a series of fastest laps, unlapping himself and taking no prisoners as he showed mastery of the conditions. Likewise, Phil Glew, now in the Whitebridge Aston Martin started by Chris Murphy, was flying, posting the car’s fastest lap just before the officials had seen enough of the cloudy darkness, throwing the chequered flag 20 minutes early.

So double wins for Bon Grimes and Johnny Mowlem, who, aside from the weather, had nothing to trouble them in the FF Corse Ferrari 458 Challenge and were able to run their own textbook race. Adam Shepherd proved an admirable deputy in the #285 Team Hard Ginetta G55, complementing Darron Lewis’s assertive performance to finish second overall, on the same lap as the winner, and claiming Class 3 honours, while the Black Mamba pairing of Chris Papageorgiou and Jayde Kruger are proving to be serious contenders in their G55; they came home third overall, ahead of the Porsche 997 Mark and Peter Cunningham – Mark did a phenomenal opening stint from the back of the grid, and Peter’s pace in the closing stages ensured that, even had the race gone it’s full distance, the following KTM X-Bow Coupe of Mike McCollum and Sean Cooper would have been held at bay. Ross Wylie’s stupendous progress was thwarted, first by the extended Safety Car period, then by the sudden curtailment, and sixth place overall barely tells the story of the effort and skill he called on to reach that place. The two other Team Hard Ginettas didn’t figure in the top positions, the Rudd/Barley car finishing seventh (and claiming third-in-class points), while teenagers Angus Dudley and Callum Hawkins-Roe’s pit stop to fix accident damage pushed them down to 10th overall. Splitting the Team Hard cars were the Moss Motorsport BMW 1M, with Scot Adam and Mike Moss unable to repeat their Donington form, and the Murphy/Glew Aston.

The MJC-Furlonger Ferrari hangs on to its tenuous lead in the championship, but its close at the top – given the scattergun scoring of the Team Hard trio, this could go down to the wire.