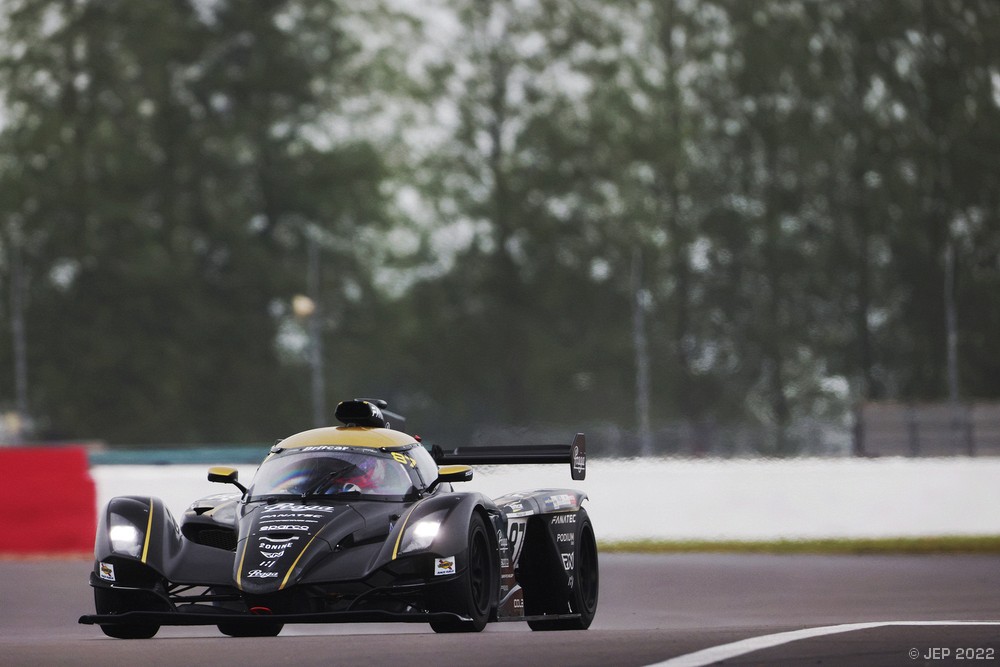 Goldie 2.0 followed its Silverstone National fastest lap time on Saturday with a well-fought and ultimately fairly comfortable win. The privateer teams, RAW Motorsports (2nd) and the University of Wolverhampton Racing (3rd), completed a successful Round with their second podiums of the weekend, reinforcing their championship challenges.

The race was run under damp and slippery conditions. Starting on pole, the RAW Motorsports No.4 R1 kept the lead but soon came under pressure from a fast-charging Charles Hall in the Mittell Cars No.77. Driving with the bit between his teeth, after failing to place in the opening race, Hall took the lead through Brooklands and was followed through by Shane Kelly in the UWR car. This duo preceded to pull away at the front, leaving Ben Stone (RAW Motorsports) with a confident Jimmy Broadbent right behind him.

With slightly more pace, Kelly was all over the back of Hall for around ten laps. He looked destined to pass as he attacked Hall, who defended each and every one of Kelly’s moves. It wasn’t until a slight mistake from Kelly on the slippery surface saw contact between the two through Luffield. The pair were pitched into spins but stayed off the barriers and both drivers recovered to rejoin the race. The UWR R1 came back onto the track in third and the Mittell in fifth, right ahead of Dan Gore in the No.29.

The No.29 had been having a close battle with the Idola Motorsport No.2 helmed by the returning Jack Fabby. Fabby managed to make a move stick in the slippery conditions, passing Dan Gore, before pitting a few laps later.

Further up the field, the UWR Praga had reclaimed the lead, though not without difficulty. A particular action of note came when Kelly looked set to make a move down the inside of Copse on Jimmy Broadbent’s No.87. Broadbent made his defense stout and stayed out wide on the slippery surface, cutting across to block the move fairly. Kelly managed to make the next move work and then went on and passed Wheldon, who made it very difficult for the UWR racer to reclaim the lead. Kelly began to build a gap in order to compensate for the race one success penalty applied during the pit-stop, coming out in fourth after the stops.

The success penalties also affected RAW Motorsports‘ No.4 R1, which had finished third on Saturday. This extra time on their stop meant that when they emerged from the pits they were ahead of Stefano Leaney in the UWR car, but behind Gordie Mutch in the No.87, ‘Goldie 2.0’.

Following a spin for ‘Everest’, car No.85, former ‘Stig’ Ben Collins managed to recover, getting past Scott Mittell’s No.77, after spectacularly going three-wide with Mittell and the fast-charging debutant Alex Fores down the pit straight.  Fores then started his attempts to get past the veteran racer. This battle lasted the majority of the race. Collins dealt with everything the young driver threw at him until, eventually, the young star passed Collins out of Aintree going on to set the fastest lap of the race and earning himself the Driver of the Day award. 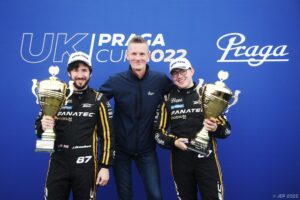 Out front, Mutch had controlled his pace well and never looked back, taking his and Broadbent’s second win of the season, and with it the championship lead going into the final two Rounds.

RAW Motorsports cemented a strong weekend with second place, showing a consistency that is vital in such a close championship fight. UWR placed third, taking their second podium of the season and they will leave their ‘home’ race feeling elated, having shot themselves up into contention for the title.

With four races left, the Praga Cup heads to Donington on 20th and 21st August, a track that Jimmy Broadbent and Gordie Mutch will have fond memories of, having taken their first wins in an R1 there last year.