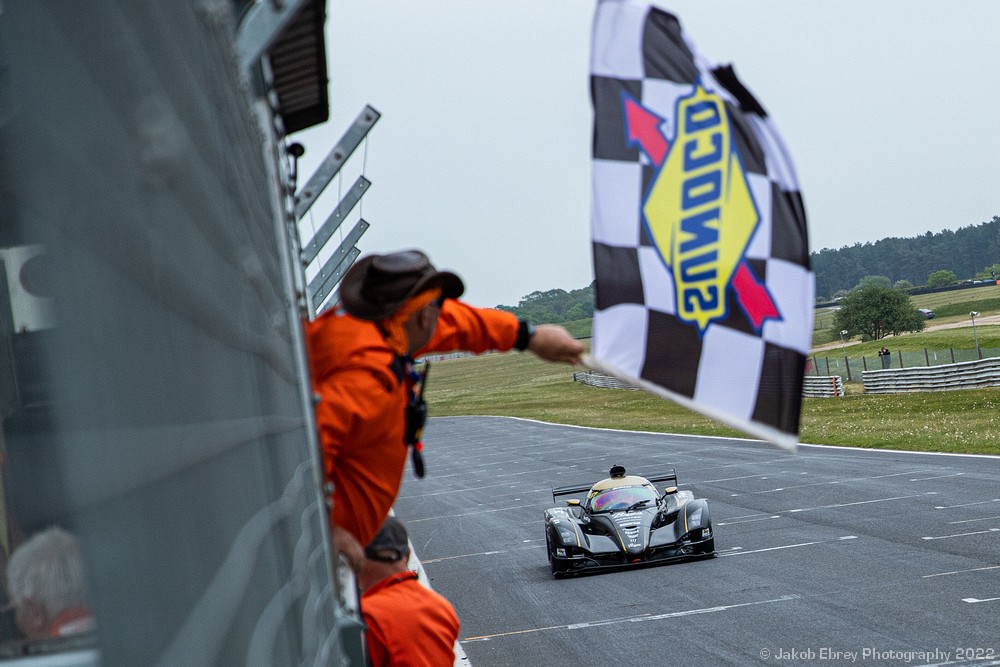 This time it sticks! Praga Guest Drivers Jimmy Broadbent and Gordie Mutch won the second race at Snetterton in their Fanatec Praga Team R1, bouncing back from Saturday’s disappointment which saw their win chalked off during post-race scrutineering. Rob Wheldon with RAW Motorsports’ own guest driver Matt Bell finished second despite a drive-through penalty, and Praga’s second Guest Driver pairing of Ben Collins and Jay Morton took third place for their first podium of the season. 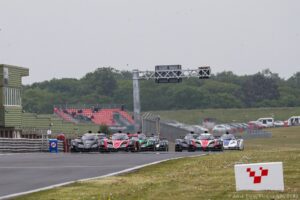 At the start of the race, which saw Broadbent start on pole, Bell moved into the lead immediately on the run down to Riches and was followed through by Chris Bridle in the No.84 R1 at Montreal. Charles Hall then passed Goldie 2.0 in Agostini. Further back, Rod Goodman had brought his No.31 up to an impressive fifth before losing a place to Dan Gore.

As the race settled after the hectic opening laps, Bell was out front, being caught by Hall who had passed Chris Bridle. Broadbent was further back but lapping at a consistent pace in tune with the leaders. It was at this point that light rain started to fall and the average lap times dropped off.

Shane Kelly was making places up in the University of Wolverhampton Racing car, passing Jem Hepworth then closing the gap to Gore. During the rain Kelly was lapping as fast and at some points faster than the leaders, putting a seriously impressive stint in after problems in qualifying. 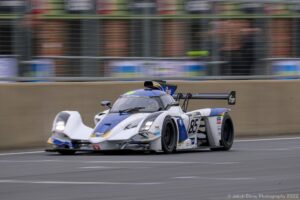 As the pit window opened, one of the first cars to come in was Jay Morton in the No.85. Morton had driven what he said was probably “the best run [he’s] ever had”. During his stint in the rain, he kept the car on the grey and also made a place up on the Arden by Idola Motorsport car and had also been catching Goodman. So, when Morton’s pro-partner Ben Collins exited the pit he was in a great position to attack the leaders: which, of course, the former Stig did, bringing Everest up to third on the road. By the end of the race, he had almost caught second placed Rob Wheldon.

Further back, the two Mittell cars had traded places, Scott Mittell had been ahead on the track after the stops but Chris Wesemael passed and before attempting to catch the No.85 of Collins. However, a brief off-track excursion for Wesemael placed him behind Mittell who defended further Wesemael moves. This allowed young Arden driver David Morales to close up to the pair, for an exciting three-car battle in the closing laps. A battle that saw Mittell go from the front of the train to the rear, being overtaken by the sister team Mittell R1 and also the Arden piloted car.

At the front Gordie Mutch, now lighting up the track behind the wheel of Goldie 2.0, had taken the lead from Wheldon, who also had had to serve a stop-go penalty for a short pitstop. Leading the race, Mutch then set another fastest lap of 1:47.288. Uncatchable, he drove home to claim the No.87’s second on-track win of the weekend. Wheldon recovered after the penalty and finished second, ahead of the charging Collins who was aiming to catch the RAW Motorsports’ R1 with a few extra laps.

This time around the results read a win for Gordie Mutch and Jimmy Broadbent, with a double podium for Praga’s Guest Drivers. 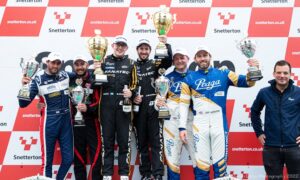 All cars that started the race classified at the finish in a successful weekend for the Praga Cup championship which saw fast times set by both Pros and Ams, and six different driver pairings take home silverware. Arden driver and 2020 Britcar Endurance Praga Class champion Jem Hepworth made a welcome return to racing in a Praga, securing two fifth places over the weekend in a fantastic comeback.

Round Four of the Praga Cup will take place at Silverstone National circuit on 4th and 5th June.