Report from Round 1, Silverstone Int, Race 2 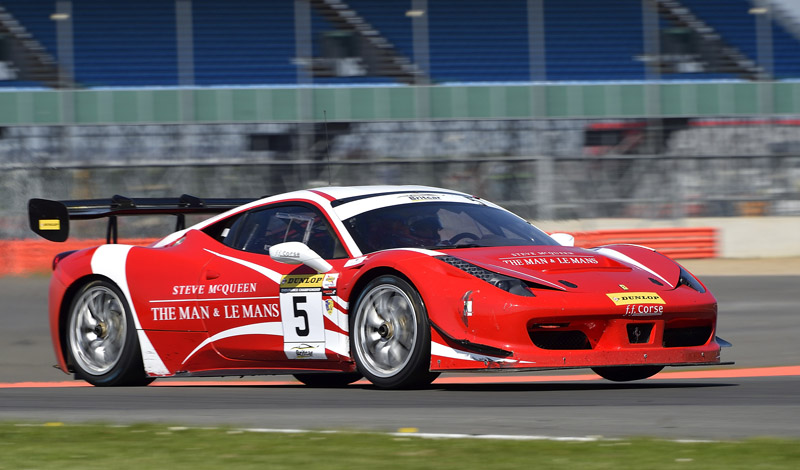 Mowlem, Assisted by Grimes and Punishment
It was FF Corse again that took the win in the second, longer race of the opening event, this time the Bonamy Grimes / Johnny Mowlem Challenge-spec Ferrari 458; Grimes had done a solid job (despite an atypical spin) of keeping the car in contention, and, making use of a longish Safety Car period, FF Corse called the strategy right, and Mowlem’s charge was aided by a bit of luck – had the JMH Aston Martin not been called in for a late drive-through penalty, he might have had to been content with second place, about three seconds adrift of the win. Aston driver Adam Wilcox showed little emotion as he explained: "I was alleged to have overtaken under yellows in my stint. We have in-car footage to dispute that, but the penalty was issued very late in the race, during Nigel (Hudson’s) stint, so we decided it was best to take the penalty and sort it out later". As it was, they finished nine and a half seconds behind the winning Ferrari, but had the Class 1 victory.

The grid for this joint Endurance/Sprint race was set by the Race 1 result, and the Sprint contenders would be flagged off after their 50-minutes of the whole two hours had elapsed, and this time it was Calum Lockie, in the GT3 Ferrari 458, that left the field behind, taking the lead from Wilcox’s Aston on the second lap, and before the first hour was up he had a lead of nearly a minute over the rest of the runners. Early problems for Mark Cunningham saw the Class 3 Porsche make a long stop to fix a gearbox oil pipe, and they never really got it together after that, Peter Cunningham rueing his performance during his closing stint: "I just don’t know what happened, maybe I’m not comfortable with the set-up, maybe Mark could drive around a problem that I couldn’t, but this is not my typical pace, I was drifting, sliding, then I spun, just couldn’t keep the rear from wanting to get ahead of the front". Simon Baker had a spin at Abbey, in the Moss BMW M3, and was pushed back into a safe area by the marshals, before eventually managing to restart the car, and rejoin.

The Sprint runners were flagged-off at 50 minutes, though minutes earlier contender Marcus Fothergill’s Porsche had come to a rest on the exit to Club, by the pit wall, leading to a dilemma regarding the deployment of the Safety Car, which was delayed for a lap to allow the Sprint cars to come into parc ferme. It was the stupendous Eddie Moore once again that took Sprint victory – as high as sixth overall, and mixing it with some serious Class 2 machinery, his Ginetta G50 finished a lap ahead of Paul Calladine’s similar machine, the Nevinson/Cooper Cayman and Kevin Riley’s Mosler, with the tense battle for Class 5 honours being settled in favour of the Baker/Swan Smart 4/4, ahead of the Hopkins/Sleigh VW Golf.

The seeming indecision of deploying the Safety Car was actually a sound idea, as the pit lane became a flurry of activity at just the right time, with a little over 40% of the race run. Only 25 litres of fuel may be dispensed under Safety Car conditions, and many teams elected for two consecutive stops, with Cintrano’s Mosler even doing three in a row, leaving Morcillo free to chase down the leaders to the flag. Despite many taking advantage of the caution, some heavy hitters stuck to their predetermined strategy, Lockie, for one, stayed on track, as did Wilds, Wilcox, and Jonny MacGregor. These all pitted with around 50 minutes of the race left to run, and just a few minutes after the Safety Car came in.

Once the field had settled again, Mason’s lead in the Ferrari started by Lockie was being eroded by Nigel Hudson, who was really getting to grips with the big Aston now, though a brace of FF Corse Ferraris, though two laps down, were moving up – the Brough/Hollings 458, newly re-elevated back to Class 2, and Johnny Mowlem – as was Javier Morcillo. We were denied one of Morcillo’s balls-out charges though; a misunderstanding with fellow charger Ross Wylie’s MJC Ferrari 458 at Abbey as they came to lap a back-marker saw the Mosler spin out and stick its front wheels in the gravel. The busy marshals at Abbey extracted the car and gave their best to push-start Javier back into the race, but to no avail, and he was pushed back into a safe area.

And so it was that a Class 2 Ferrari was victorious once again, and, with the exception of the second-placed Aston, it was Ferrari 458s in various guises right down to sixth place. Charlie Holings was the star this time, bringing the car started by Mark Brough home third, ahead of Mason/Lockie, Wilds/Zamparelli, and the GTE of Witt Gamski and Ross Wylie, a good return to action from the former Britcar champion and his young hotshoe driving partner. The Team Hard Ginetta G55 of youngsters Angus Dudley and Callum Hawkins-Row expired in the second half of the race, but the three remaining Team Hard Ginettas locked-out the Class 3 podium, Rudd/Barley, Bearne/Wylie and Lewis/Knight making a clean sweep of the trophies, and with Simon Rudd bowing to Team Hard’s management technique; "They came up with a strategy, I disagreed, but they stuck with it, and they were right" he said. Not making the class podium was the Chris Murphy/Dean Gibbs Aston Martin, which attracted a five-second penalty along the way, and the Neil Garnham/Rob Young Porsche 911.

Lone driver Jonny MacGregor battled gamely in the heat in the Taranis – the pace is there, and an overall midfield finish will be bettered soon surely, while Class 4 saw Sam Alpass/ Clint Bardwell repeat their Race 1 win in the Atkins Motorsport/Geoff Steel BMW M3; "The tyres were shot towards the end, but they came back to me" admitted Bardwell. They beat the Moss Motorsport M3 crewed by Watt/Baker, who, along with the Cunningham’s Porsche, were the last cars running at the flag.

The Moss/Evans BMW 1M had an oil feed issue which saw it retire at three-quarter distance, Laurent DeMeeus and Jamie Stanley’s disappointing event in the Ferrari came to an end, as did the similar Leyton Clarke/Graham Lucking machine a little earlier. Rob Hudson and Adriano Medeiros also had a challenging weekend, their issues causing the turquoise BMW to stop out on the circuit, and the Woodard Mini Cooper of Daniel Woodard and Davie Birrell barely got going, retiring after four laps.