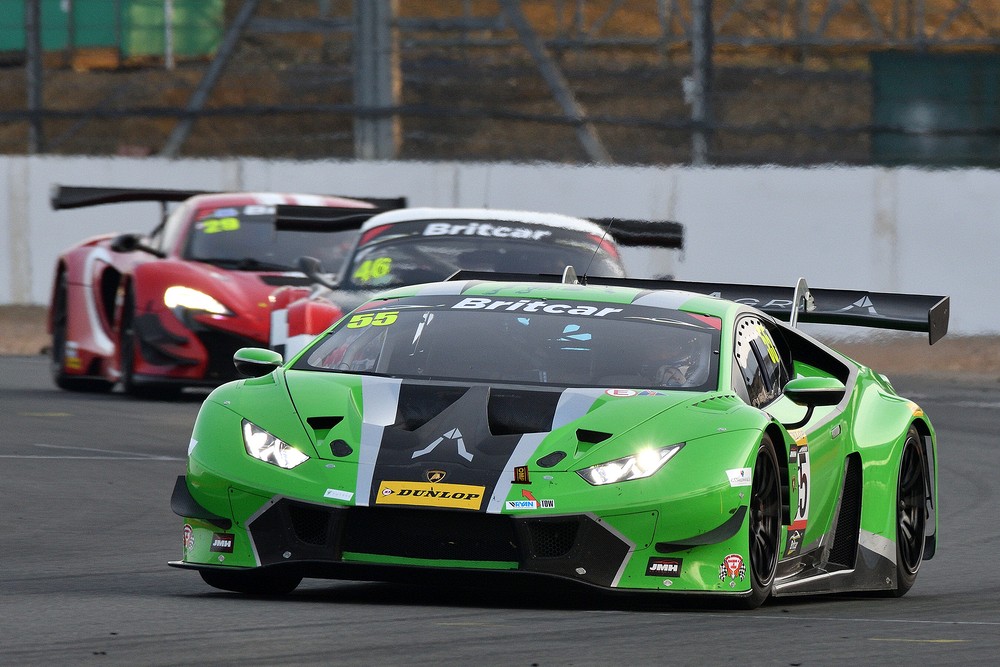 John Seale and Marcus Clutton, in the JMH Automotive Lamborghini Huracan, won the second race of the day with a clear lap advantage over the opposition, but in the opening laps once again had to give best to the VR Motorsport Praga.

With 33 cars on the circuit, even the pace lap was a bit close, and as the red lights went out for the start, Ben Sharich’s Taranis leapt from the second row to make it three abreast towards Abbey, though Tim Gray had got ahead by the time they reached the curve, leaving Sharich and Seale to dispute the same piece of tarmac. It was the most minor of side-swipes, but the Taranis was unsettled and spun into the gravel, thankfully avoided by the following pack. Excellent work by the marshals got the Taranis pushed back onto the track, but the best part of a lap was lost, and Sharich was now playing catch-up.
The Praga began to stretch a significant lead – over a second a lap on Ross Wylie, who had taken advantage of the melee in front of him and hauled the FF Corse 488 up from the sixth row of the grid. Behind them, John Seale was fighting off Kevin Clarke’s BMW Z4, with Lee Frost, starting the Simon Green Motorsport McLaren this time, also wanting a slice of the action.

There was early-race attrition – Pies Reid’s BMW was driven straight into the garage just four laps in, and the ALP Saker was retired, the exhaust gas heat sensor still indicating trouble, and the two JPR Sakers had issues too, Steve Harris having splitter issues, and Paul Rose stopping out on the circuit a little later. Class 5 was depleted by the retirements of the Rob Baker/Lucas Nanetti Smart 4/4 and Arthur McMahon’s Honda Civic, but the big news was the leading Praga, that had slowed, been passed by Wylie’s Ferrari, and was now in the pits with an electronic glitch that would signal retirement after a very impressive debut. This left Wylie with a fair advantage over the scrapping Seale, Clarke, and Frost, which would be interrupted at 24 minutes in, when Seale pitted the Huracan for Clutton to take over. Making a significant impact, though, was young Sam Neary in the Team ABBA BMW M3, having started stone last on the grid after a mare of a morning, and now up to ninth overall.

Seale wasn’t the only early pitter though – also breaking the beam at the earliest opportunity were Wayne Marrs and Paul Bailey in their Ferraris, and the Porsches of Marcus Jewell and Adam Knight, all giving their co-drivers maximum track time. Once he was installed in the Huracan, Clutton did his usual trick of punching-in some fastest laps; no Praga to catch this time, but any one of the Ferraris, the Frost/Khera McLaren and the ING Sport BMW could have been a threat.

Paul Calladine had come to a halt in his Ginetta G50, a real shame after the EDF team had really pulled out the stops to get the damaged car out for Race 2, and Mark Cunningham, up to third in the Porsche was a late stopper, but none were later than Wylie, pitting from the lead just within the legal time constraints, and handing the 488 to David Mason. Staying out on track was Sam Neary, now in an inherited lead, the team having misunderstood the 60/40 two-driver regulation. Once he did stop, dad Richard took over, and was straight away on and above the pace, despite taking a drive-through penalty for the misdemeanour. Also upsetting the men in serious trousers was MacG Racing , Jonny MacGregor needing to endure a stop/go for a short pit stop, as did the FF Corse Ferrari of David Mason.
Clutton held a substantial lead as the one-hour race drew to a close, but was wasn’t holding back, and behind him, Mason had to give best to Ryan Lindsay in the BMW started by Clarke, and Lucky Khera’s McLaren, who were embroiled in their own battle, while John Clonis retired the CTR SEAT with just seven minutes of the race left, allowing a late-race spurt from Sam Alpass’s BMW to claim the position, and also make a move on Guy Colclough’s SEAT.

So, it was a convincing win from Seale and Clutton in the JMH Automotive Lamborghini Huracan, a lap ahead of Lucky Khera, who had managed to get the Simon Green Motorsport McLaren shared with Lee Frost past Ryan Lindsay’s BMW Z4 in the final minutes of the race. Lindsay, Clarke and the ING Sport team had done a magnificent job of keeping the "old technology" Z4 in touch with the more modern and sophisticated machinery. Jonny MacGregor did his best to recover from the opening lap woes in the Taranis, and it was only the Huracan faster than him in the closing stages; fourth in Class 1 and ninth overall was no reflection on the true potential.
The Class 2 podium mirrored that of Race 1 with a trio of Challenge-spec Ferrari 488s – Wayne Marrs and Charlie Hollings in the JMH car, then Paul Bailey/Andy Schulz, and Wylie/Mason, while in Class 3 it was the Track Group Porsche 997 of Marcus Jewell/Lewis Plato ahead of the 991 of Adams Knight and Hatfield, and, after another smooth run, Mark and Peter Cunningham in the SG Racing 997.

The Invitation-entry Fox Motorsport Mercedes AMG of Mark Murfitt and Michael Broadhurst capitalised on a good starting position and kept out of the mayhem to take the Class 4 win again, but this time the points-scoring places were a little different – a strong opening stint by Sam Neary was complemented by a short but take-no-prisoners finisher by dad Richard, earned them the top class points, with lone drivers Tim Docker (VW Golf) and Sam Alpass (BMW M3) next up. It’s competitive in Class 4 now – Guy Colclough and Max Coates followed in the DAT Racing SEAT , with Sarah Moore/Moh Ritson’s Ginetta G50, the SEATs of Lines/Taylor and Woodman/Byford, and the Porsche 911 of Dave Benett and Marcus Fothergill all scrabbling for a result, and the valiant Team BRIT squad of Martyn Compton and Warren McKinlay making the finish despite early gear selection problems in the Aston Martin.

Barry McMahon made it a clean sweep of Class 5 victories in his Alfa Romeo 156, with Chris Murphy’s BMW Z4 second, and Andrew Stewart annexing the final class podium spot in his Honda Civic.

This meeting had signified a new dawn for Britcar; new format, new competitors, new winners, and for all concerned, new challenges. We reconvene back at Silverstone in four weeks’ time.